Won’t print even close to where the camera says

So I’ve been trying to figure this out for some time now, and at this point i am beyond ticked off. Im ready to throw this glowforge in the garbage.

I have been having issues with the glowforge not printing where the image shows on the screen (with the 3 cameras it has, an it should not be hard to format things so that it prints where the image says its going to print. I have tried everything that has been suggested in other threads, and nothing seems to work. Turning it off and on again, refreshing bed image before every print, focusing on a specific point. I have messed with different materials, Thicknesses, Settings, etc. I have tried the recalibration print (multiple times), cleaned every lens, nook and cranny. everything, etc. Nothing.

I finally resigned myself to just dealing with the fact that it is off, and made a jig like some people suggested. Even though this didn’t seem like a long term solution to me because you are basically have to do twice as much work (at least two attempts for everything you want to print). And it’s a guessing game at best.

So… I took my piece, put a piece of tape on it, and on low power, scored a bulls eye (the bulls eye was just for a faster print while centering) on the tape until by trial and error, I had it centered where i wanted it (and then scored it 2 more times just to be sure it was at least being consistent). So far so good. My jig was locked into place with the place holding pins, so it didn’t shift while I removed the tape and tried again, for real this time (because I thought I had finally gotten everything where I wanted it). I overlaid my design I wanted to engrave directly centered on the bulls eye design, focused, ready, set, go. Everything looked good up until this point. Exactly the same as it had when I did the ‘bulls eye’ test cut.
BIG FAT NOPE. For whatever reason, It’s printing almost an inch high left of where the bed image shows up… which is about half an inch high left of where it had been previously.

Now… who the crap cares if the glowforge can print to “the thickness of a human hair” if it does it an inch off of where you want it.

For an example of a case I tried. Leather patches. Masking tape on the leather for the cut first, peel off the masking tape and then engrave. So the file is a logo, inside a circle. I will cut the circle and ignore the logo engraving, when its done, the image is off from where the laser cut. Then Ill peel off the masking tape and start another print of the logo engraving. It looks off centered from where the bed image says it cut, but its centered in the ‘design’ circle, so i figure it would print the same amount off center. Nope. Not centered. So then the next time, I tried to recenter the design on where it cut instead. Nope. Still not. It doesn’t seem to be consistent. Sometimes it will be off straight to the left. Sometime up at an angle. Sometimes it will stretch the bed image so the ones in the middle are centered, but at the edge they are off. And other times the whole image is the same amount off.
I can’t make heads or tails of it.

I’ll try anything. Open to any suggestions. Hopefully glowforge gets back to me with some magical reset I can do, and I can finally be free of this stress. I have ruined sooo many pieces trying to get this figured out. 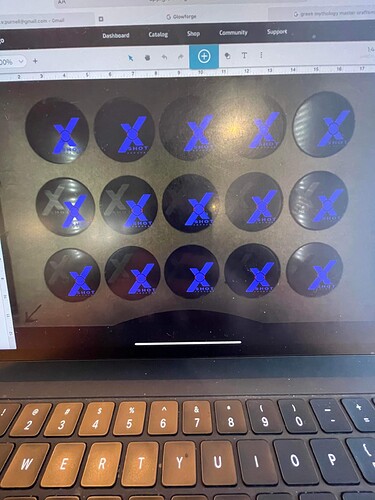 Is the material you are ‘testing’ the same thickness as the material you are printing on? The focus happens every time and adjusts accordingly. Are you using set focus or manually entering the thickness? As far as your pic, when you see it after it prints, it ‘appears’ offset but if you leave it exactly as is and print something again, it will end up in the exact same spot You can’t depend on it ‘visually’.

You always want to place your original image after using “set focus”, not before. And in a multiple step process, you need to trust the alignment as placed but not as it visually appears.

I am sorry you are frustrated. The camera is accurate to within 1/4", but I find mine to be quite precise. I also take advantage of the placement tool, and when things have to be perfect, I make a jig. Perfect alignment is absolutely possible, so I am afraid you are missing a step somewhere. If you always hit set focus before placing your artwork you will be closer to getting this right. If your artwork and the cutout for the jig are in the same file, you will be able to get perfect alignment without much issue - especially since you are using the honeycomb tray.

your artwork and the cutout for the jig are in the same file,

you need to trust the alignment as placed but not as it visually appears.

These are the two most important parts of using jigs @juliet.v.purnell . You don’t visually align after cutting the jig.
Especially if you’ve already found your camera alignment to be off (btw there’s only 1 camera, not 3).

You upload ONE file with artwork in different colors for the jig, the engraves, the cuts and any other steps, they must be aligned properly in the file so that you’re not moving anything around in the GF interface. Cutting the jig must be the first step - after that IGNORE THE CAMERA. Your engraves and cuts will be properly aligned.

Your machine has 1 camera, not 3. The one camera is fisheye so it is not able to give too much of an accurate view of the bed. It relays on the glowforge software to correct this and the user to set focus to line up a design in the area that focus was set at.

These are prints that were done with the lid camera blacked out: 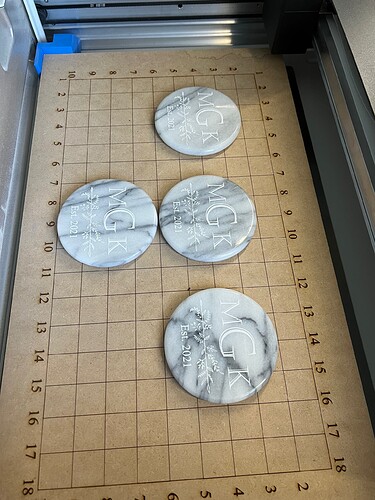 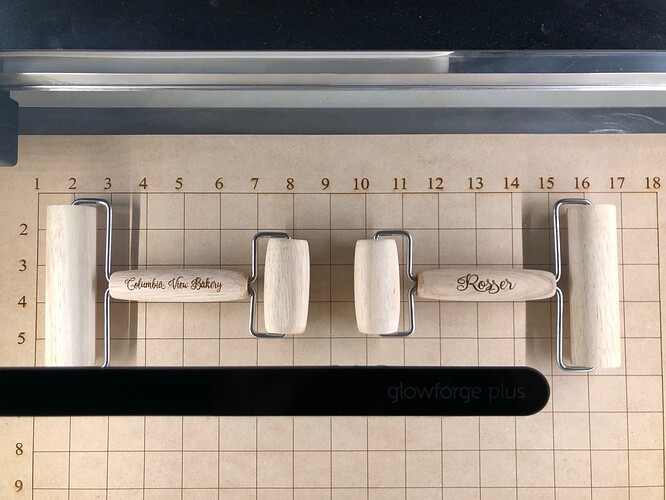 They were accurate because you can make a jig of your beds grid. Keep in mind your grid will change just a little any time you relocate your machine. This is why it does not come with a grid.

As @MyDogsThinkImCrazy pointed out the actual numbers the machine uses can be seen by highlighting the part of the design (or all of it) and clicking on the lower left corner widget. Repeating those numbers will always be the same place.

Figuring out where a piece is on the screen is some very fancy math, but it is very dependent on the height of the place you are looking at. So the height setting is critical. Before using Set Focus the height setting is zero so any height more is way off. I often use set focus more than once to be sure that it is looking at the place I am pointing. If the machine is well calibrated (see calibration) you should be correct to under a millimeter every time, even though they only guarantee a much larger amount.

I think you may be saying you are not moving anything between steps, but it’s a little ambiguous the way you wrote it, so you have half a dozen replies telling you not to trust the camera.

Your process is actually a good one to get accurate alignment, as long as you align your artwork to the bullseye in the design, without moving anything. At that point you’re completely ignoring the camera.

The Glowforge will absolutely accurately cut in exactly the same place over and over and over again for any given artwork positioned in exactly the same place in the workspace. The camera image is provided for guidance, but it does nothing for the machine. “Set focus” also does not move where it lasers, it only warps the camera image. So once you have found your spot, using trial and error and low-power scores on tape, you have found your spot. The only things that will cause it to shift at this point are:

That last one could be a loose belt, cracked pully/wheel, debris on the tracks, failing motor/motor driver, etc. If you’re absolutely sure it’s not one of the first three, start checking for problems with the motion system. Maybe cut some circles and confirm they’re perfectly round.