I bought a wooden plate from hobby lobby I would like to put a picture on. My test runs are either 2 deep, or to light. Has anyone printed on one of these before.maybe some help with settings?

You should spell out what settings you’ve tried.

Generally you can increase contrast (darker) by slowing down or increasing lpi.

Also some species of wood engrave much darker than others. Cork is jet black. Mahogany can be very dark. Birch is quite light.

So what species and what settings have you tried? A quick reminder: if we get into actual settings we’ll have to move his thread to “beyond the manual”.

I wish I could post a picture. It’s more a texture thing. Like the highlights on the face are super raised maki g the faces look distorted. But when I put in setting for a softer wood like bass (I’m using birch) it was so light you lose dimension. To where it looks like it didn’t print right “like the printer ran out of ink lol”

To where it looks like it didn’t print right

If you use a good masking and leave it on after engrave then a light pass with a stain could produce nice results.

are you using Vary Power for all of these? if so, you might want to try a test using Convert To Dots.

See I was just wondering if I should change it to vary power. Could you elaborate on the difference?

If you have an image like a snapshot the shadows and highlights are all over the place so in a vary power 3d engrave the bright side of a face (as example ) would be very high and the dark side a hole and so on that would not enable you to see the person except as the most weird abstract. If you used a raster version like convert to dots then where the photo was lighter there would be fewer dots and where it was darker there would be more dots which will more resemble the actual image. the dots might be more shallow or deep but all would be at the same original height if the material.

In this the image is convert to dots and the frame is vary power; 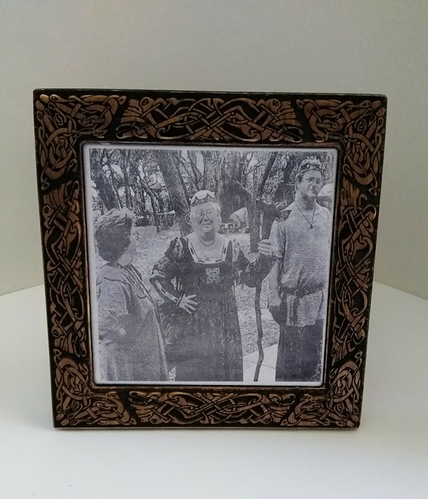 That could very possibly be what happened the first time 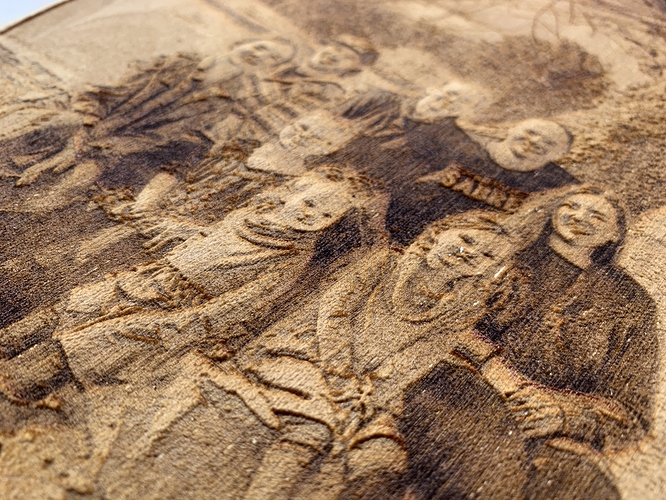 what happened the first time