X-Carve along side a Glowforge

Just curious if anyone runs an X-Carve along side of their GF. They are very similar in abilities, albeit one is a rotary engraver and a router, but the X-Carve would allow for bevels. I wouldn’t plan on a ton of woodworking as personally I think my skill set isn’t on par to be fooling in that field, but the idea of having the ability to easily add a bevel or joining edge prior to lasering intrigues me. Also if you think about it, you could greatly expand your anodized aluminum engraving field (if you didn’t want to rotary engrave it) by being able to router cut shapes in aluminum.

Like I said just curious if anyone uses a duo set up as such, and if you do how much you use it or like it.

The big thing it gives you is size. Given that the x-carve does almost a meter on a side, lets you do much bigger and deeper projects (like a big sign)

I’m not an XCarve power user but have both machines. Like my XCarve a lot but I don’t use it to it’s full potential. An occassional sign or simple design. Most of my XCarve use was before receipt of the GF. Purchased it because the wait for GF delivery was killing me. There are plenty of people here that have both machines.

I don’t. But I do so enjoy toys. And tech. And tech married to cool stuff. Oh if I only had a warehouse sized shop… oh and a Wazer… soo frickin cool!!..

Thank you. I forgot to mention that factor of difference too

yes the potential for depth cutting is by far greater.

Have you put yours to use on projects aside from wood or acrylic? Like metals, PCB boards etc?

I feel like if I added the X-Carve to my GF I would be in the same boat of not using it to its potential. That and I would probably have to be buried with it upon receipt once the wife found out (I tend to buy toys outside of “normal/frequent use” that are expensive). Currently proving the worth of the GF, so until then I’m just pondering things like the X-Carve. 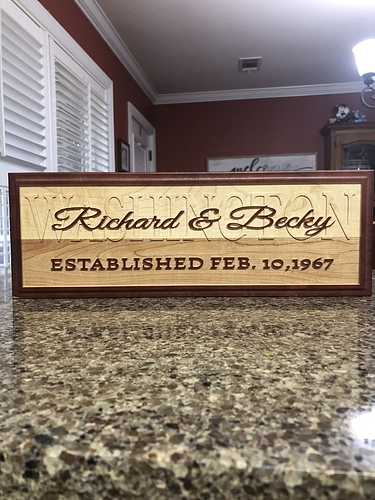 That subtle touch of the lower letters in contrasting wood is amazing, that detail sets it apart from “basic” signs.

A major thing I would want to put an x-carve to (I dont have one) is all the things that are problematic on a Glowforge. PVC (Especially Foamed PVC), sheet Aluminium, Mahogany, Thicker woods (even when you can fit it in many become charcoal if that thick.) really deep engraving on thick wood. larger scale stuff like furniture… If I keep going I will talk myself into one.

They cannot begin to do detail as the min diameter of the tool sets the scale available, and half the diameter takes at least four times as long as it has to go slower and four times the distance to cover the same area, and probably more passes. Thus also takes more effort cleaning the work up after as well.

I’m glad my brain thinks of stuff like this to get conversations going, because I never knew about mahogany and the GF. Is it too hard of a wood or does it release a fume, what seems to be the issue?

PS, I am not a sales person for X-Carve or GF, but being in retail was 12 years of my life so I’m good at making people talk themselves into things haha.

I am also wanting to try thick PVC sheets but have trouble finding it here at a decent price. Closest I have found is about a 3 hr drive. Yes it is slow the sign posted above took about 2.5 hours doing a 2 stage carve with bit change. I have no clean up on these pieces using a downcut bit, 1/8 bit for roughing pass 1/16 for finish pass.

I’m actually about to pull the trigger on an X-Carve myself. I can’t wait to combine the abilities of the two machines, and make some stuff that’s been rattling around in my head.

I have no clean up on these pieces using a downcut bit, 1/8 bit for roughing pass 1/16 for finish pass

Ballnose for the finish pass?

Just a flat bottom downcut bit and I do slow the feed rate down a bit. I have only used ballnose bits on 3D carves.

Thanks…I was thinking the ballnose might give a cleaner edge as the nose tapers so the cut through the wood doesn’t have any roughness on the sides or letter shoulders. But don’t mess with success eh?

I’ve got the x-carve’s little brother - the Carvey. I think it’s an ideal companion to the GF. It has the same ready-to-use “appliance” quality as the GF and is about the same size.

For cutting anything thicker than 1/8", the Carvey is my go-to. Fairly fast and don’t have to worry about charred edge. On the other hand, the GF is the hands-down winner when talking about engraving. Of course, neither of these are hard and fast rules.

For 3d engraving, both are great. The Carvey allows for great relief carvings that just have a “rich” feel. The GF’s ability to capture detailed carvings is amazing.

I’m really happy when I can combine technologies. For Christmas, a friend wanted his mother’s recipe engraved on a cutting board. Instead, we went with a GF-engraved 6"x8" ceramic tile inset, flush mounted into an 8"x10" walnut plaque. Strengths of both machines. The walnut was cut to size in the carvey, along with a carved pocket. The GF burned an amazing facsimile of the hand-written recipe. Finished off with a small brass plate was inset on the back done on my other toy - a Roland rotary engraver. (I have not used the Carvey for drag-engraving on metal yet, but it is very possible. Just too easy to use a dedicated machine like the Roland.)

because I never knew about mahogany and the GF

Some woods burst into fire easier than others. You can cut 1/2" paduk with two passes at 120 speed full power and have a reasonable cut, Long before that the mahogany will sport a fire and a coal once started will turn it all to ash, Zebrawood and even Ash will become ash if you do not take enough care, but all the mahogany I bought with high expectations is the worst…

I have the X-Carve’s cousin, the Nomad. I am not using it a lot right now but, it is clear that it can complement the GF for the sorts of things already discussed.

I thought I might be getting a new toy when I saw your post - but at $4K for the entry level, I think I’ll stick with the Shopbot and GF.