4" Vent option in a basement window?

Or a masonry drill if it’s a block wall. Took me 30 minutes for a complete install. A solid concrete wall is somewhat more difficult though.

We really don’t have a good spot available, because there is pool equipment on the outside wall above the basement window. There is a gas pipe already running through, and an air conditioner pipe. On the other side our electrical and cable comes in, and the pool pump switch is there.

Certainly would avoid the electrical side, but behind the pool equipment sounds like a great place (because who cares if a bit of smoke blows onto that). Not like hot gases or something comes out. And having the noise behind something will help mute the sounds.

Build a box that encases the open window, something that hangs over it and seals against the wall. This might require using something like cheap strips of magnets attached to the wall and box, so that it seals similar to a refrigerator door. The vent hose would feed into that, then out the window. No need for that cover you have outside, or leave it and open up several vents.

You could make it so that it encloses the window in the open position, but just has a removable/hinged access door, so you can open and close the window as needed…

I can’t be sure from the pic, but that baffle you have on the outside is likely a severe restriction to airflow.

Something like this. Frame it in cheap 2x2 lumber and cover the sides with cardboard or fiberboard, have the hose feed up into the fan on the bottom right, lose the rest of the ducting from the fan. Hinge the front from the top so you can open and close the window as needed. Seal it up with the cheap strips of magnets I mentioned above. 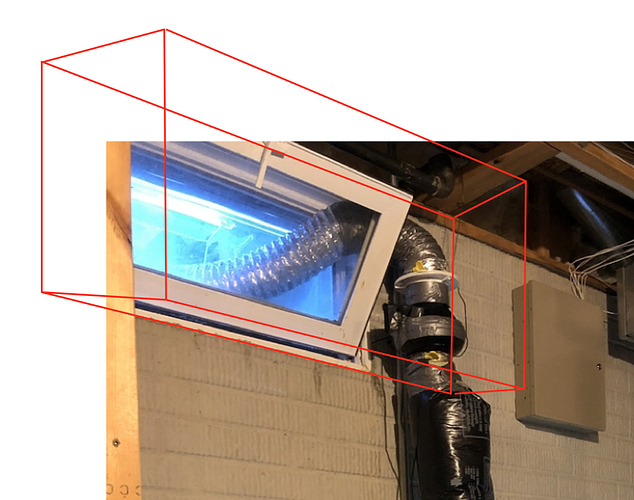 Very interesting idea! That could work… I will have to think about it. Thanks for sharing your idea with me on this.

I also like that I really don’t have to do anything with the window… I think my biggest worry would be the airflow going out the window and not just sitting in the baffle.

It won’t (or shouldn’t) be an issue, as an open window like that presents no obstruction to airflow.

The front flap could be a single sheet of cheap lexan if natural light is desired. It could have a couple of small latches if magnets alone are not enough to keep it closed - or you could just use them instead of magnet strips, in fact.

I think my biggest worry would be the airflow going out the window and not just sitting in the baffle.

Hmm very good point on the particulates. I wonder if I could come up with a way to direct the flow past the window. Since it is a tilt window it makes it challenging to do so. I showed my wife the baffle concept and she likes it, so I may have to try this option first

Just angle the front panel so it is near the open window panel, there will be no airflow there, so no worries about contamination. In any case, it would be easy to clean.