But the air assist fan is not in there to help with cooling. It is there to clear smoke from the area so it doesn’t impede the laser beam. Since it can affect the material I would think you would want a fan with the least amount of flow to just get the job done.

and you’re probably right. i’m still learning, definitely. the “mechanical designer” bit wasn’t to try to throw my weight around, more of an explanation of why i’m wondering these things. i’ll shut up now.

Haha, no don’t think for a minute your musings are annoying anyone. In fact just the opposite. Ideas thrown out there can kick start other ideas. Keep them coming.

it is there to clear smoke from the area

And more airflow would probably help with that. @jbmanning5 has talked about this before re: his other machines.

The issues that are really hard to get around are physical… mass and dimensions and power supply. These largely scale with fan capacity, and we appear to be pushing some limits already. The higher volume fans are largely combination fans, with multiple turbines inline to generate more airflow, which would probably break our physical constraints by a large margin. Think of how precise clean corners has to be. If we increase (or decrease) the mass of the head we’ll probably first see clean corners break down. Increase the mass enough, and we would eventually overwhelm the steppers and/or belts, which is a whole other level of bad.

So we’re already up against some pretty exacting physical constraints. Not sure how to deal with that.

You are too kind.

If I were more inclined to improve the air assist, I would first look at creating a more concentrated, direct flow as opposed to just a larger flood of air. However, I’m not an engineer. I don’t know precisely what happens when you force feed fan generated air into a very small outlet to concentrate the flow. I think that you’re going to come up against static pressure problems. Having compressed air comes with its own host of problems, beyond just the all-in-one form factor GF worked to develop. One thing to note would be that generally air assist works (on other systems) at a pre-determined distance from the material. The table moves up and down, so the lens and air outlet maintain the same distance from the material regardless of how thick the material is. That won’t happen with the Glowforge since the lens moves and the table is static.

You’re definitely right that EVERYTHING is connected. The whole is greater than the parts. 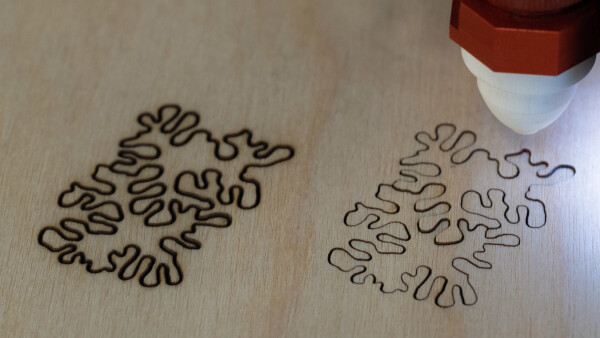 I try you deserve a compliment every now and then for what you contribute. I for one appreciate and enjoy reading you posts.

Thank you. I appreciate that.

You are very welcome…

i would definitely be intrigued to see how it could be improved… i wonder if a direct nozzle, similar to how coolant is sprayed directly on a cutting tool in a mill, would affect the cut. would definitely kill the need for the rear-mounted air assist to clean…

I am thinking a direct air stream may be more hazardous in some cases. It may cause more flare up on combustible material.

I have small direct air stream on my micro sabre saw and it blows the dust everywhere that much air directed into such a small area could very well cause flare up.

Most systems use an air compressor and the air either leaves via the nozzle, below the lens, and directly down and into the cut (the air is blowing through same place the laser beam goes through), or a separate fixture that is outside the head but directed right at the cutting point. How much air (SCFM) gets ran varies and is somewhat difficult to measure because pressure is adjusted in a larger area of tubing but it’s generally only from a few PSI up to 30-40. But it’s generally not going to cause flare-up — it’s pinpointed enough that it’s entire goal is to reduce/eliminate it.

Yeah I’, just kind of spitballing what the effect might be. I just thought if you had an ember and directed air at it then that could result in a flare up more so than an indirect flow of air over the surface.

kill the need for the rear-mounted air assist to clean…

It would also add to the clearance of the carriage above the work. The fan with its shroud extend 2" below the carriage. Looks like the top of the focus range is 3/4" below the bottom edge of the head, so an 1-1/4" material thickness could be gained (if I measured that right).

Ok, so you would need an air compressor and a small one that would have to fit inside and by their nature they are very noisy. Then you have to factor in the issue of having to replace the pump if/when it goes out. Just something else that could go wrong and cause issues.

The one on my sabre saw is so noisy you can’t hear anything else in the room.

You also would need to factor in a way to remove the water that compressing air inevitably results in.

I’m not sure how the trotec system does that with its built-in compressor. On my other systems, I’ve ran desiccant filters (with in-line water traps), and finally just ended up running it all through a refrigerated air dryer.

i don’t know about needing an internal compressor. if you have one with a tank, it would only have to run periodically. i have a 3 gallon for airbrushing, and when i run at 35 psi output, the compressor isn’t constantly running. as well, there are silent airbrush compressors out there. so i think it’s possible on that front.

as for the water, just have a good air trap. so long as the air has time to get to a temperature that would allow the humidity to drop, (i think) it wouldn’t be too much of a concern.

If it’s not internal then you would need to modify the case for the hose to fit inside and that would void any warranty. I have a compressor that I use when painting my model trains, while it’s quieter than most it’s still a little nosy. As for the water that’s just something I personally wouldn’t take a chance on without a good way to drain it to the outside.