Arriving sooner than the cure for cancer (as if there is only one) which is just 20 years away.

And I thought a lot of folk had that on their computers?

Crazy, I don’t remember seeing that email at all.

I placed my order in April of 2016. The first estimate that I can remember seeing for the air filter was July, then while logging in to check on it months later I noticed it changed to September. I logged in today to confirm that my suspicions of another later date, were true, it’s now November.

A couple of months back I had prepared a lengthy post offering to sell my Glowforge to anyone I could personally deliver it to (avoid shipping costs) as it is sitting on my dining room table waiting for its filter. I wish I hadn’t opted to receive it as soon as it became available as I live in a condo and literally can’t use it without its filter (now it’s extended warranty is depleting month by month with no use). I was a little too excited to receive it and figured I could use the original 5 month wait to build a table for it and set up the room for it. Instead, due to our open floor-plan, it just sits there and mocks me on a daily basis for my own foolish impatience.

Despite being bummed, I will say it is beautiful. And while I dust it every few days I realize I have something else I can prepare for it while I wait for its filter, a dust cover. Has anyone designed/sewed a dust cover for theirs?

And thank you OP for posting this question, I have been wondering for the past several months the same questions. 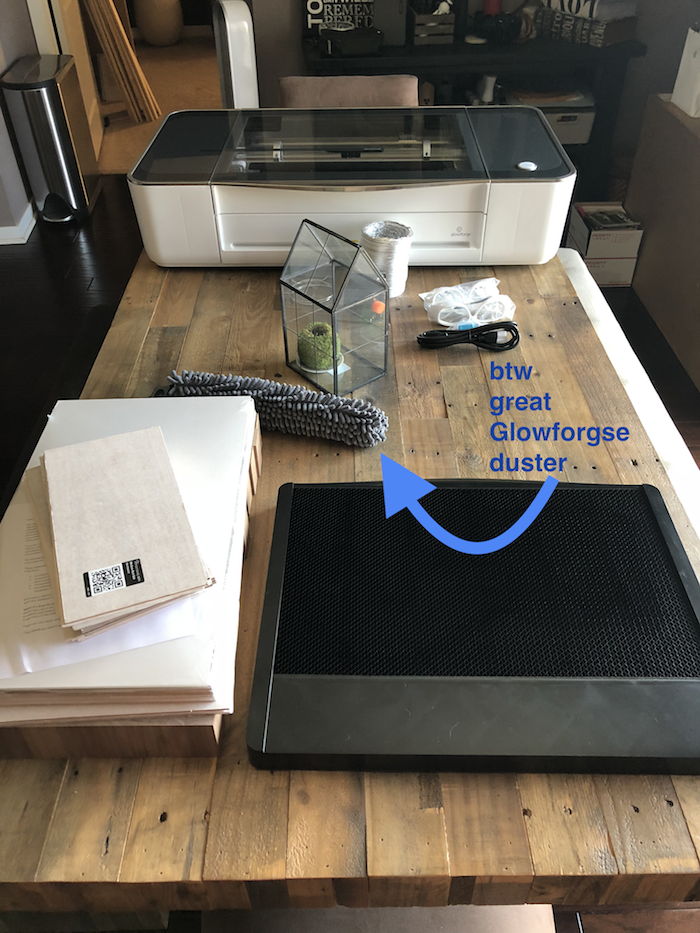 You can’t put the vent hose out of a window? It doesn’t have to be air proof either. Let me know if you need any help.

I would look into an alternative in fact I did buy this and though difficult to connect the 4 inch to ten inch connection, it can certainly allow you to use your machine.

We had originally started looking into similar solutions back in January, but were concerned with causing subtle but lasting damage after reading specs between the two. And perhaps if we had known that the wait was going to be more like 11+ months back then, perhaps the $650 price tag for a temporary bandaid might have been worth it. We had also considered cancelling when we first got our email and going with another brand of laser that simply includes a filter, but truly wanted the Glowforge.

Unfortunately no. Our HOA is cray cray. We live on the 2nd floor and got in trouble for having one potted plant on our balcony… don’t even know how they knew about, you had to be hunting for it to even see it from down there. If we had a hose going out our window to the degree of the Glowforge documents, we would definitely have it callled in. (And our windows are these huge windows that open outward on a hinge, so it really would be obvious). I convinced hubby to buy a pet sliding door insert, and now we are tasked with trying to adapt it to fit the hose out 3feet onto the patio without being visible from below.

Thanks for offering the support though, this is such a great community.

. I convinced hubby to buy a pet sliding door insert, and now we are tasked with trying to adapt it to fit the hose out 3feet onto the patio without being visible from below.

You really don’t need a long extension outside. A simple dryer flap is enough as long as the rest of the window opening is sealed with a piece of plywood or in your case some clear plexi.

Our HOA is cray cray. We live on the 2nd floor and got in trouble for having one potted plant on our balcony

Maybe you need to watch reruns of Hogan’s Heroes for ideas on concealing the exhaust?

Glowforge Cover Everything Else

Hey guys, I got my Glowforge just over a week ago (super excited) and the first thing it needed was a workbench on wheels and the second thing it needed was a cover. Of course I needed to customize the cover with an laser engraved name tag… I’ll also share the plans/drawings for the workbench, if anyone is interested. Thanks -ajvince [IMG_1608][IMG_1609] [IMG_1607]

Cover for my Glowforge Made on a Glowforge

While this isn’t technically made on a Glowforge, its made for the Glowforge. As I get the kitchen remodeled, I haven’t had as much time to get and do my experimentation for the perfect Catan board (I have dialed in the engraving settings, but want to play around with paints and unmasking techniques before I get a set printed). In the meantime, I asked my wife to help me with getting a cover designed for when the GF is not in use. Made with Duck Canvas, and embroidered with my machine’s name. …

Protective Glowforge cover for $0.94 Everything Else

[vinylcover] As much as I really like the covers that @ajvince makes (check out his Etsy store), I needed to go quick and low-cost for my initial dust cover since I have a lot of dust floating around from the Xcarve. So I made a dust cover for $0.94. Yes, less than a buck. Materials: Vinyl shower curtain liner (lightweight) from Walmart, approx 71" ($0.94) Duct Tape Scissors Tape measure Sharpie marker Cutout design PDF: Glowforge_cover_template.pdf (63.1 KB) [cutcurtain] Mark out the …

Yeah, 3 feet isn’t that long… just need to make sure it’s not visible

Haha, I might have to. & thank you so much for the links, that’s super helpful!

if we had known that the wait was going to be more like 11+ months back then, perhaps the $650 price tag for a temporary bandaid might have been worth it.

I knew that it would be a supposed 5 months (it will be at least 10 ) and did not want to wait. The $650 turns out to be a lot cheaper than other viable alternatives. It is bigger than I thought, and less needed as I did manage an “Out the Window” alternative but had to sacrifice the Dining room for it, However particularly at first I had leaking issues, and a lot blew back in the window before I fixed it at which time the blue beast worked like a charm even eliminating cooking odors

Your porch alternative in your situation will probably not work out as wood, acrylic, or leather.would not be unnoticed by your neighbors, however even without that you could engrave tiles even now and start having the fun as long as you did not use tape over them they would engrave with no more than dust showing and not much of that. in such a case even emptying back into the room with nothing would not be critical.

Contrary to damage having even a 500 CFM hurricane blowing through (you can dial quite a range from too little to the 500)would help far more than hurt the situation, running cooler, and moving the smoke out faster there would be less buildup and less cleaning.

That’s impressive that it was able to eliminate odors. We are really hoping the Glowforge filter can handle the leather and wood smell; but from our experience with the Epilog we currently utilize, we aren’t holding our breath.

I agree with the Hogan’s Heroes references. Get creative.

I agree with the Hogan’s Heroes references.

…because just as in the six seasons of Hogan’s Heroes, this war seems never to end.

we aren’t holding our breath.

So it works? I guess that if it did not you would be.

Lol… I was referencing your comment about your Blue removing the kitchen odors. The Epilogs we use at our local workshop do not take care of the smell unfortunately… or maybe I just don’t know how bad it would really be without their huge filtration system.