Found a list of box maker applications 2 weeks ago or so. Had several applications on it and I thought gee this is really neat never seen a few of these.

Well for whatever reason I thought it would be easy to find again but alas I was wrong.

I’ve used every combination of searches I can think of but can’t find it.

I know of box o matic, box.py “believe it’s called”. And that Inkscape has a tabbed box maker but I’ve not messed with that one.

My wife wants to make a sliding lid large pencil box for a friend that’s a teacher but other than making a basic box and moving the rest to the garage on the table saw I’m clueless but have seen many doing it.

Outside that makes me mad I didn’t save the list for future stuff. Any help is appreciated thanks.

Hello! You’ve been referred to this post because you have a common problem or question. Check out the list below to see what this post can do for you. Just click on a topic that interests you.

Here’s one that was posted soon after i got my GF from @geek2nurse . I loved it…Living Hinge Pencil Box Pattern

Yeah I also made a sliding box once… the tricky part is always the slot.

Box pattern with sliding lid Everything Else

Hah funny story, I did make a box like that once. It went really well, so well that I forgot I did it. This is designed for 0.130" BB. You might need to adjust it for your material thickness. [slidebox_free] The notches in the top are oversized, you’ll want to play with them if you want them to be totally invisible. You’ll notice that my side rails are not 100% free-floating, I have a tiny bridge on the front side where I don’t cut the material, This is to keep everything aligned until yo…

was thinking for simplicity just doing a false wall on 2 of the interior walls so each of the 2 walls will have the outside box then an interior wall on each side that has 2 pieces leaving a slot for the lid.
may not be the best looking idea but should function and for a pencil box probably good enough.
After all it’s holding pencils not the Royal Jewels probably gonna get broke by one of the kids anyway hehe. 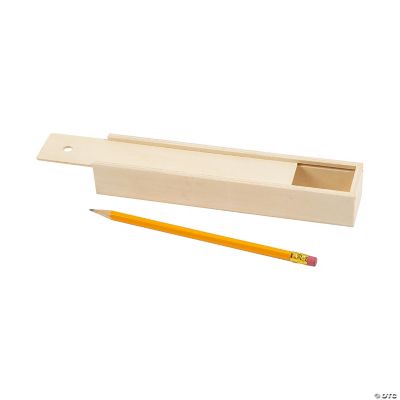 Create something special for back-to-school or home office supplies with these unfinished wood pencil boxes. Each box can be painted, colored or otherwise ...

20 bucks for 12 of them (that’s $1.66 per box! less than just the cost of materials you’d use probably). Laser up the lid with whatever custom design you want, finish it how you like, add a custom liner out of fun paper or leather, and voila.

(btw this is just one of many wooden pencil box sellers, google it up and you’ll probably find the box you want for dirt cheap.)

How did I never know Oriental Trading sold wood blanks. Thanks for the link.