Can someone help me figure out why my puzzle pieces have so much movement?

It should reveal if you have close double lines. 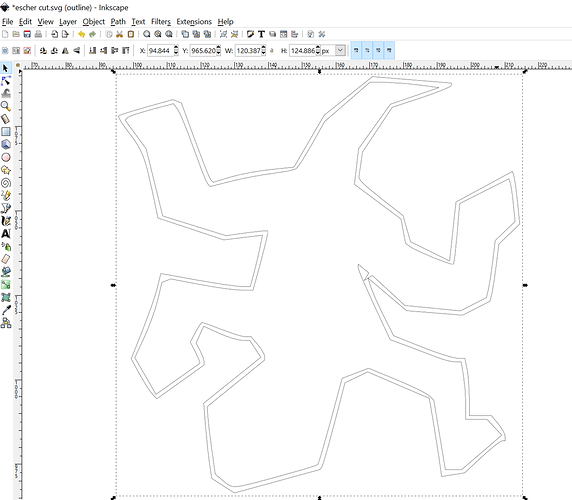 BTW, there’s a newer version of Inkscape - this one was created with the old version and it gave me a warning about needing to convert to mine (92.2.2). Worth downloading the latest version.

I think that the precision needed for an Escher tesselation precludes simply tracing a bitmap and cutting. You might have to do some work with strokes and path and Booleans to get back to the exact single path needed. I’d say you could test that by making several copies of the gecko and fit them into each other in the design and then see what kind of overlap you’ll have to have to compensate for the kerf. Any puzzle piece just cut out will have wiggle in relation to its neighbors. doing a tesselation can be challending, especially something like the gecko.

As noted, @m_raynsford has demonstrated some mad skills on his blog. The fish he posted are great though. there are three tiles and since they don’t have any complex inner angles, you can cut them all singly and they will collapse into a very tight fit, if tiling over an open surface.

Bitmap trace in inkscape (almost) always needs cleanup for double lines or other interesting things. It’s the nature of the process. (In general, what you see as a single black line gets treated as a region to be filled, with one line on the inside and another on the outside. Because the converter never knows when that line might get wider.)

Next question is… any tips on how I remove a 2nd line or any good tutorials to help teach me how to make better .svg files for inlay or puzzles so there is little to no wiggle room? I’m a complete beginner on vector design and Inkscape software and am fumbling my way through my own “workflow” that is probably not the most efficient use of the Inkscape program.

My workflow basically is: I take a shape/art/design and bring it into Photoshop to clean it up. Then I create two .jpg files. The first is a black fill of the shape (to be traced as a Stroke in Inkscape for the cut shape) and the 2nd is a .jpg of the image itself without the outline ( to be traced and left as “fill” lines for the etch)

Then I drag both the .jpg images into Inkscape. I trace them to get vector files. I then set the one that was a solid black fill to a stroke setting of .011 (as my cut line) and the one I wanted as etch I leave as a “fill” setting. Then I align both via the alignment tool vertical and horizontal and group them together and then save as a .svg file. Then I upload into Glowforge and print.

This workflow has worked flawlessly for me except for puzzle pieces or any inlay type work as there is too much wiggle room… unsure if I need to be adjusting anything in Inkscape for Kerf (and how to do that) etc.

My Glowforge is out for the count right now (working with support on the issue) so I’m going to spend some time on learning more tips/tricks on Inkscape and design software so I’m ready to go when my machine is back up and running!

Kerf adjusting in Inkscape is a bit of a pain in the tush, but there’s a tutorial for it:

Unless cutting pieces individually, the “slop” between two pieces is always going to be kerf/2. I haven’t measured what the kerf is on the various chip boards that I have. Maybe I’ll test that out today

On each individual piece. It certainly wouldn’t be worth it to me to try to adjust for it, but it can be done using that tutorial.

A bit more explanation of what JB and I are talking about…If you wanted to kerf adjust a puzzle, you would have to cut each piece separately…as in not sitting next to each other and sharing a cut line between pieces. Trying to engrave an image on top of separated pieces is going to be pretty tough to do.

I would have to think about that one long and hard. Maybe the kerf adjusted pieces could be assembled after cutting and a secondary engrave performed on the whole thing - but you’d need a way to keep the puzzle assembled while engraving it.

the “slop” between two pieces is always going to be kerf/2.

Isn’t the void left between two pieces what we call the kerf, which is the whole kerf made up of 1/2 void on one piece of material and the other 1/2 on the matching piece of material. Each piece contributes 1/2 of the kerf or slop, but the slop between the pieces will equal the kerf.

Or am I totally confused here.

Yeah, that’s a right way of saying it, probably. Trying to not be exceptionally verbose on some of this stuff as I feel like it just gets more confusing. Maybe that made it worse. Each adjoining piece will have half the kerf width in material removed, so “slop” would be the total kerf.

I figured out how to convert an outlines-only puzzle into separate elements in Inkscape. That is, a puzzle where each cut is represented by a single path, into one where each separate piece is its own path.

Combine all the paths into a single path (CTRL-k). Draw an outline around the whole thing, a simple rectangle will do. Then making sure that the outline is below the cut path in the object browser, run Path->Divide (CTRL-/). You will get a whole bunch of individual closed paths that you can then individually reposition and kerf adjust. The first button under Rearrange in the Align and Distribute window works okay for exploding a puzzle.

What I can’t figure out is how to apply the same procedure to a bitmap engraving, to keep it together with the pieces. I don’t think it’s possible. You can clip a bitmap, but Glowforge does not support clipping paths. If your engrave is a vector, some combination of division and grouping may work.

Maybe the kerf adjusted pieces could be assembled after cutting and a secondary engrave performed on the whole thing - but you’d need a way to keep the puzzle assembled while engraving it.

Assemble the blank pieces on a piece of masking material (I use the signwarehouse 6 & 12 wide masking) that’s on top of a piece of chipboard (or cereal box cardboard). Then just pick up the chipboard and slide it onto the honeycomb like a pizza

You can also mask the top of the puzzle pieces before engraving to keep the smoke from the engrave from staining.

I figured out how to do it with an engraving.

Import your bitmap, select it, Object->Patterns->Objects to Pattern. That will turn your bitmap into a rectangle with a repeating background image. Use that rectangle as the background against which you divide the cut path against. It won’t have a stroke color by default, so give it one either before or after you divide or you won’t see the pieces.

You can then explode the results and kerf adjust them.

Of course, the original issue here was the double cut lines. I’ve cut a puzzle without kerf adjusting and the slop was minimal. Just enough to make solving the puzzle easy.

Import your bitmap, select it, Object->Patterns->Objects to Pattern. That will turn your bitmap into a rectangle with a repeating background image. Use that rectangle as the background against which you divide the cut path against. It won’t have a stroke color by default, so give it one either before or after you divide or you won’t see the pieces.

You can then explode the results and kerf adjust them.

This is interesting…we had initial issues with using Patterns in the interface…did you try to cut/engrave one and see if it came out?

(That might have just been Illustrator too, so I’m not sure if it’s changed since the early days or if there’s something in AI that was causing issues.)

Oh. Huge bummer, I thought I had discovered something interesting. Yes, I am using Inkscape, and no, it doesn’t work in the GFUI.

I’m thinking the best method here would be a combination of Photoshop and AI.

Okay, for real this time:

Do all the pattern stuff, exploding, kerf adjustment, etc.
Turn off the stroke, export as PNG, 300 dpi, full page.
Turn on the stroke, turn off the fill pattern, import the PNG and align to page.

That imports correctly into the GFUI.

Just one more step to create a raster…yeah, that ought to do it! :