I am using Woodpeckers plywood to cut out some words for signs. I tend to have a problem where things get MOSTLY through, but leave just a touch in some areas. I am playing around but have not found the best, most reliable way to fix this. Looking for help from you pros…

Is it best to slow the cut? When I do, it seems to burn more but not always do better
I am on full power for the laser…should I lower the power and do it in 2 passes?
Should I adjust the thickness for the material? I measured it out to 0.23 - but maybe I should be plugging in 0.25 instead and just making sure it thinks it has more material?

What have you all found to work best? 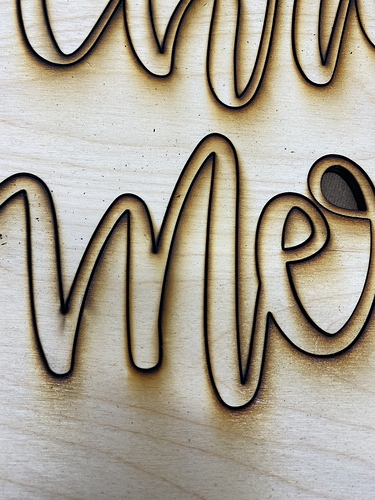 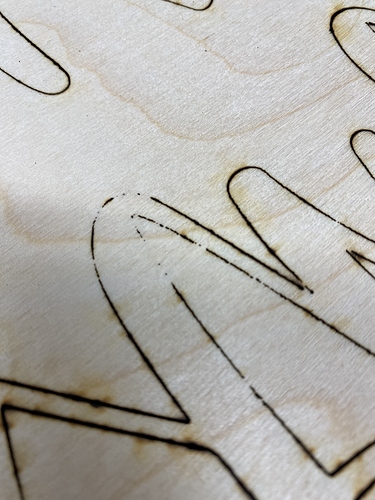 1- The program does not adjust like that. Giving a thickness greater than actual changes the focus and does a worse job unless it is a score and you want the path wider.

2- Slowing the cut will cut deeper, but if it still does not cut well you might have a different issue. just last week I was having such issues and looking carefully at the window in the head noticed it had just the slightest smudge. I cleaned it and the cuts were instantly better,

Also, you can do a 2nd run of just your cutline after you’ve tested on a piece without moving/removing anything. Just close the lid, set everything else to ignore, and run the cut by itself.

If it’s only one part with an issue you could also quickly upload a copy of just that section, line it up matching exactly to your prior pattern (even if it looks like it’ll be wrong on the material) and cut that

There’s a really handy test strip in this post that has helped me dial in my settings: Has anyone been cutting 0.37-0.40 material?

For better cut-through without increasing burn, I use 2 or even 3 passes.

The laser beam is shaped like an hourglass. The goal of focusing it is to put the narrowest part of the hourglass at the surface of the material, to give you the finest cuts. Changing the thickness of the material just puts a wider part of the beam at the surface and gives you a wider cut, and since it’s defocused it probably won’t go as deep. There are things defocusing is good for (e.g. smoothing out lines in engraves), but it’s not useful when you’re cutting.

Do you check plywood like that with a powerful back light? On some plys just the LEDs in the bed can give you a good sense of what is in between the veneers. Sometimes it is just more glue, sometimes it’s knots. Sometimes it is the power and speed. But it is good to eliminate the material as a source of this.

I typically cut through .23" ply in one cut except where there are inconsistent densities.

OK… thanks to everyone for the tips - @rbtdanforth - you get the winner ribbon. I had a smudge as well. I am getting through now on 130/FULL with 2 passes, but I think with the smudge cleaned, I am going to use @geek2nurse 's test file and see what I can get by with.

You all rock! Thanks much. And thanks for the explanation on the focus too. Very helpful.