If an engrave has depth then the metal is gone. To be clear: I do not believe that the Glowforge can engrave steel to any depth, which was the reason for my original reply. Marking is a totally different thing.

I’m seeing some confusion about the physical properties of the result, and I can give another example that I haven’t shared on here yet that may shed light. Yes, you can remove metal, but it seems rare to do so, and to do so in a controlled manner that leaves behind a clean engrave such as my RTK logo on the knife at the start of this tread.
The example I am mentioning occurred when I tried to engrave a cheap folding knife with a complex logo. The logo was designed to be engraved at about a 2" diameter, so when I sized it down to fit on the knife blade, it was roughly .4" in diameter, meaning that the details of the design were bunched extremely close together. I watched the laser complete the engrave, and patiently watched as sparks and slag form and bounce off the blade(melted bit of metal/droplets of liquid metal). Upon cleaning up the blade post-engrave, I saw that the design was just a jumbled and unrecognizable mess of slag and burn marks. The slag bits were 3 dimensional, and if I had to guess I would estimate their diameter at an average of ~.2mm-.5mm There were scores into the metal, and burn marks on the blade where slag and sparks had landed.
I am sorry to say that I do not have the knife, nor do I have information as to the exact settings I used, though it was pretty near the time I did the first tests of this thread so I probably used roughly the same settings as earlier mentioned on this page.
As to cutting steel, it would have to be so thin that it may as well be metal leaf, and at that point I would assume that it would be impossible or at least quite difficult to control the result.

I am not an engineer, and though I try to learn as much as I can, it is possible that some of my terminology may be off-mark. Please let me know if you need clarification on anything, I’d be happy to answer any questions.
I hope this helps.

*Also, I have not had this kind of slag/spark combination repeat itself since, this was the only time I ever had a result of this kind. My guess is the metal properties permitted the heat and duration of the laser to heat the small engrave area to a high enough temperature to cause this result. 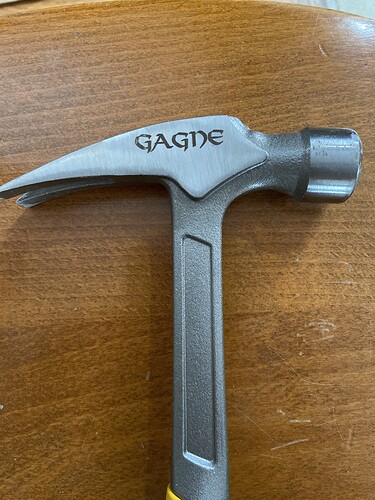 I used the settings to engrave a hardened steel hammer. Only difference is that I misread and thought you said 2 passes.