I had a friend ask if I could engrave steel. I told him no, only aluminum. He said what about Ceracoted metals? Hey! There’s an idea! So I got right to it.

This was my first attempt and I couldn’t find any advice on the subject on these forums so here goes.
I used masking tape to avoid scorch.
Then I put my settings as follows:
-Speed 600
-Power 36
-LPI 675
-2 Passes

The results were pretty good, the lettering came out crisp and dark. The graphic also came out it great detail but I could see that in several places the laser cut all the way through the ceracote finish and revealed small glimpses of shiny steel.
I think the best way to avoid this would be to change power to 28 and leave the rest of the settings the same, hopefully this will still adequately score the caracole without breaching the surface.
If you want the steel to shine from below the ceracote, I think power 50 and all other settings the same as I have above would do the job, but you’d have to test that for yourself. 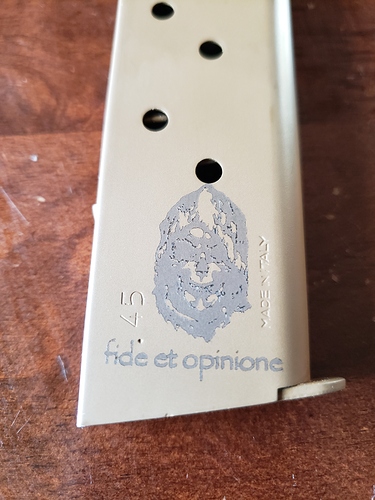 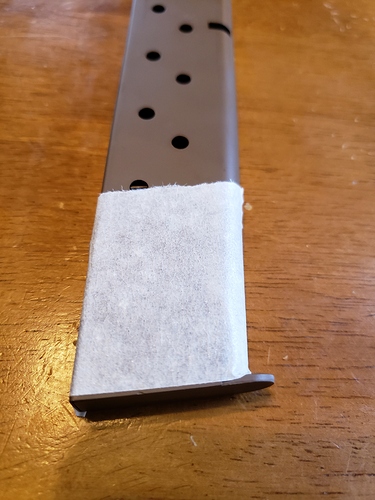 Update
I tried the original settings on a knife clip that has 3 layer ceracote and less risk of burning through to the bare steel. This one came out beautifully, though placement could have been more precise but it was hard after having to shrink the font so small to fit.
(the font is Rune, it says, “Better to die on your feet that to live on your knees”) 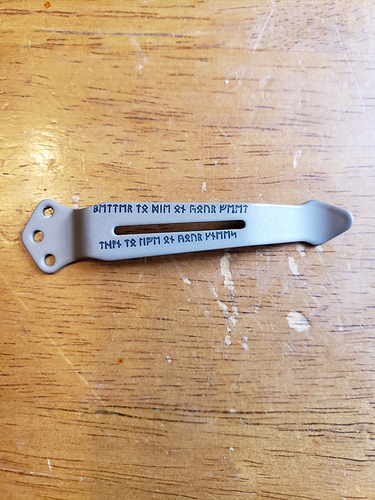 Update
Using entirely different settings in order to better mark a thicker ceracote, I came up with some nice results that only took 14 minutes or so on the laser: 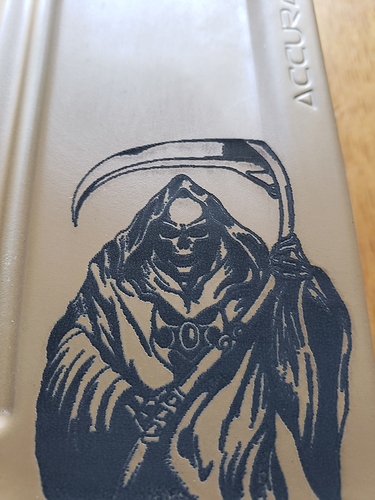 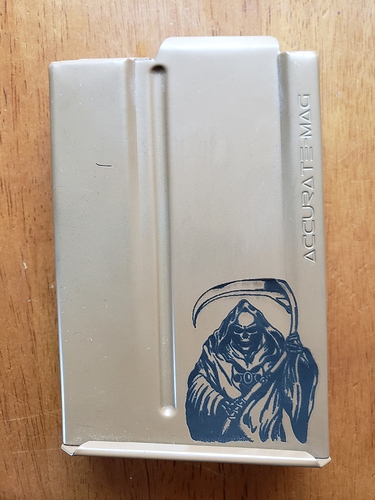 Nicely done, I admire those who dare to take us into the unknown.

I started this thread saying that I dont engrave steel. Lately I have been experimenting a lot with steel engraves. If you’re interested in those results, the link is here:

Engraving 1085 Steel Beyond the Manual

There’s some information on here about engraving steel on knives, tools, etc, but I haven’t found much that worked for me personally. I’ve been looking at doing knives, firearms part, etc for a number of people and have had very mixed results. Today I engraved a knife that was custom made for me by a close friend, Ryan Turney of Ryan Turney Knives in Amarillo Texas. In the first attempt, settings were as follows: -Full Power -105 Speed -675 LPI -1 Pass As you can see, it isn’t as defined a…