Found this on amazon's Q&A

I have watched some videos of people building large format systems from scratch and they aren’t CHEAP… but hacking up a glowforge you still wind up with the shortcomings of the glowforge at the end of the day. Size and difficult to work on case along with things like questionable quality on the glued glass and such. I’d personally just buy a larger format chinese machine (definitely not a k40) or build from scratch.

I’m actually thinking I might start buying stuff to make a frame and add parts as I get the time and money to do so over the next year or two. Probably something like 36 x 24 bed area.

I have been trying to find a home for one that might be a good start: 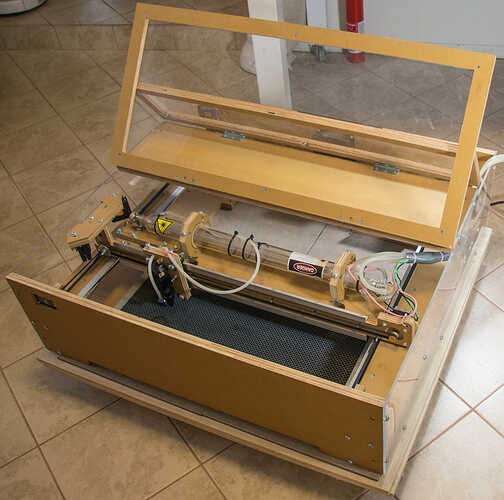 You are welcome to it, if you want to come get it but, probably not worth the drive.

Yeah Phoenix is quite a haul from Illinois. But thanks for the offer.

FYI, the search function only searches (I believe) the last year or two without you forcing it to look older - entering a “before” and “after” date will force that. I started at the very beginning of the forum (which had only been around a couple years when I joined) and literally read everything. It’s fun(?) but the older you get the less likely the info is still anything close to accurate so sticking to searching posts by @ dan going back that far might get you more - it was a while before they started doing official announcements.

a lot of those things you call limitations are potential positives for other people.

GF was not targeted to people who could build their own (even though some who could, including on this thread, did buy in, they aren’t the target audience).

the footprint and completed closed system is a plus for someone who has no desire to tinker and just wanted a machine that would fit in their workspace as one single piece.

the footprint and completed closed system is a plus for someone who has no desire to tinker and just wanted a machine that would fit in their workspace as one single piece.

This. I had a tinkery laser before GF, it had a lot of … quirks. I bought GF because it promised to solve a lot of annoyances and has delivered on such.

I’ve thought lasers were cool for 20+ years. This is the first one I’ve ever bought for exactly this reason.

That was the issue with the Blacktooth I mentioned above: the amount of tinkering required to maybe get to where I could do what I wanted to do with it was too high. There is nothing wrong with wanting to build or tinker with a laser (or other tools). It’s just not where I wanted to spend my time.

The Glowforge was only a little more expensive than the Blacktooth and, let me get on with stuff for which I wanted the laser.

I have EE and CS degrees, and have been an Electronics “hobbyist” since the late 70’s.

I designed and constructed custom audio sampling and output hardware for the ZX Spectrum, and wrote what would the similar to Audacity to use it.

I wouldn’t touch this little adventure with a 10’ pole - although it was fun to read about. I got my two years (four now, actually) out of my machine.

Oh for sure. That’s one of the reasons I bought it. I saw all the hassles people were having to deal with to create a “good” K40 laser and decided I wanted something that I could pull out of the box and just go. BUT… we were talking about what we would/could do if the company went tits-up and we had to get a new laser or cobble together something from the remains of the glowforge. And I stick to that assessment that if I’m building a laser, while the glowforge husk would LOOK nice… it’d be too limiting and too much of a hassle when you could start with some extruded aluminum rails and create pretty much anything you want tailored to your shop, likes, taste, etc.

fair point. the compact, all-in-one design is not simple to modify.