To achieve this, the spacing of those particular holes around the fan need to be
1/4

Yeh, that’s what I feared. OK.

What I suggest is that you thread the sticks using the row of holes that are central between the large heart at the top, and the first diamond.

You are going to need an anchor hole on each of the guard sticks(the ones at each end). Make them with a needle or finest drill that you have, and position it by pulling the nearest stick over it and pencil mark down through the right hand hole (the larger one).

OK - Roughly where in the guard stick (left to right) do I need to make that new hole? Also wondering whether two holes would look neater on the guard so I can tie the knot on the inside rather than countersink.

so I can tie the knot on the inside rather than countersink.

Brilliant - I should have thought of that - old dog, new tricks !
If you align the nearest center stick to the guard, then the position of the large holes (the ones that you using for the threading will be the right place.
If you are contemplating taking it apart to laser the guards, the same top part of the pattern would be a nice motif to tie it all together. Engrave the heart, the diamonds and the holes, but drill the centre of the large holes ?

Fans with just stick, held together with a thread or ribbon are known as brisé fans.
Received wisdom is that it might come from the Portuguese name for a light wind.
The Portuguese introduced the first folding fans into Europe c. 1450, bringing them back from the far east into Genoa where their paymasters lived.
Again, received wisdom is that the folding fan appeared in Japan or China about 1000 AD, but I suspect it was produced in Korea about 600AD. There is a tradition of the Korean Royal Family having a form of martial arts of their own, that involved the use of a folded fan as a weapon.
Pay your money and make your choice.

(Use a bit of tape around your finger to push the knot + glue into the hole).

Tape to protect your finger, but still providing some feel is brilliant! This is a very handy trick for more than just fan making.

If your using sewing thread, a drop of super glue on the end, and pulled between the fingers, will make a good substitute for a needle, and speed up the threading.

You deserve a few more glashes of wine.

If you are contemplating taking it apart to laser the guards, the same top part of the pattern would be a nice motif to tie it all together. Engrave the heart, the diamonds and the holes, but drill the centre of the large holes ?

Sadly, I don’t think I have enough time left to take it apart and the chances of me lasering the guards perfectly, given the pressure, is slim methinks. So, I think I drill the guards using the two smaller centre holes as guides.

Instead of using one of the two holes mention above in stitch, I’ve added a centre to each of the centre sticks. I’m going to refrain from gluing just now as I know we have some leather stitching thread around which I think might be better / stronger. 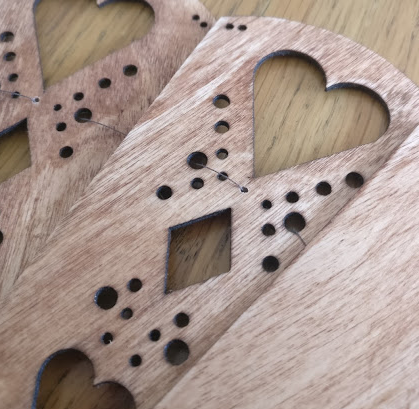 These might need a touch of oil to make them less obvious mind.

Central hole is perfect.
Do you have time to cut a small piee with the motif on, then glue it on top of the guards, in the appropriate place ? Contrasting wood/veneer ?
Can you close it so the sticks come one on top of another ?

Thankfully, no need. I have all the bits I cut out of the sections I have (these bits must have a proper name by now, no?). Getting the colour right might be interesting now mind. I think it’s a single coat of Boiled Lindseed followed by a ‘Dirty Wipe’ (can’t believe this is the actually term they use!) of Mahogany Oil Dye and then a fine coat of the same.

Like it - using the cut out pieces as a sort of counterpoint on the guards.
Fancy becoming a fan maker in your spare (!) time ?

You sir… I could kiss you right now. There’s no way I would have figured this out myself today and I guarantee things would have sailed across the kitchen when what remained of my sanity finally snapped. Thanks to you though, Mrs B will have this tomorrow (instead of a grumpy and very sorry husband). Thanks, I really appreciate it! 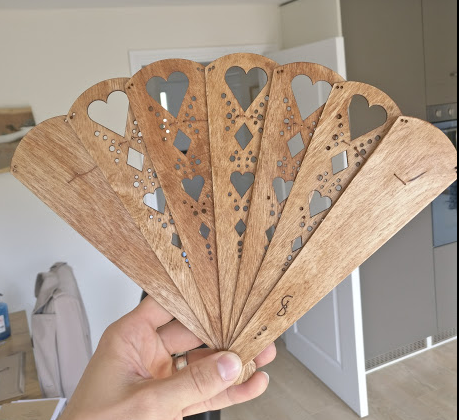 And, part-time fan maker… not a chance lol imagine the cost at my hourly rate

Glad you got there, and yeah, it took me over 30 years to discover that you can’t make a living as a fan maker.
But, a man’s got to do,…
Hope to start again in Corinth next year, with my first US exhibition, but this time with Glowfinger to help !

I have all the bits I cut out of the sections I have (these bits must have a proper name by now, no?)

I call the bits chaff, but my youngest daughter calls them “coagulets”. We don’t know why.

Much more interesting than ‘scabs’ !

Present it laying over red tissue, if you can get some in time !

The presidential race in 2000 gave us the name. CHAD

A “chad” is the fragment left over when you punch a hole in a material.
All the controversy was over ‘hanging chads’ much like we get when the force is not with us.

A counter-intuitive bit of history - if the holes were punched clean in paper teletype rolls, that was ‘chadded’, but if the paper still had the chads hanging(by design) that was ‘chadless’ tape.
Less mess to clean up and the chads didn’t get into the tape readers.

my youngest daughter calls them “coagulets”. We don’t know why.

Maybe a product of the same DNA strand that led to my oldest / her cousin naming his pet snake “Monkey.”

I actually like “coagulets”. Plan to adopt it for daily use IRL.

As Jules stated, I too love threads like this - don’t know if I’d ever make a fan but it’s fun to learn something new.

I know it’s solved, but when I saw the original problem, my first thought was whether you could have slots or grooves on the back side of each blade, with a mating pin coming from the next blade over. Thoughts?

Oh my, that question takes me back about 25 years, and the answer is yes, you can !

I was commissioned by one of the Livery Companies to create a fan for the wife of the then Master of the Company (yes, they are titled the “Mistress”).
As she was a highly qualified engineer, I offered as a throwaway line " I could even make it from carbon fibre and titanium, if you wish".
And yes, she went with it.
I devised the slot and pin method that I used, as no traditional method seemed appropriate - thread or ribbon.
Apart from the problem of fixing the pin normal to the surface of 0.25mm carbon fibre sticks, there is another problem - interference of the head of the pin with the pin of the one above it. Each stick has a curving slot, and a pin at the right hand end of the slot. in the solid material, but displaced below by a little more than the width of the slot.
Alternate sticks have ‘high’ slot, or a ‘low’ slot, and this allows the fan to fully close.

At least, I think that’s how I did it !
If I can find a photograph, I’ll post it.
John

Did you make the blades or use existing material? I’ve done a lot of composite work (radio control - hobby) and would probably use something shaped like the ball side of a snap fastener embedded between layers… 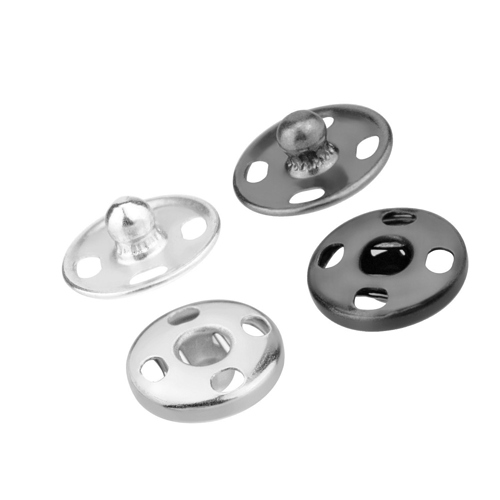 Think what you could do with today’s pre-preg colored weaves!

I used pre-preg carbon fibre. I had a friend who worked at Lotus Cars in the old days, so got useful off-cuts.
I’m afraid your snap fasteners are an order of magnitude too thick., and there can’t be anything protruding underneath each stick (not blade !)
Each stick had the top 1" pierced in a fish scale design with an ‘S’ incorporated - her initial.
Cutting 3mm thick titanium, for the guard sticks, to shape by hand was no joke, either, but the final finish, with electro-colouring looked good.
I fear any photos I have are already in Corinth, so no access for a couple of months.
John