I definitely don’t think it’s an installation issue because I’ve only had it a month and it was cutting a variety of materials fine until yesterday.

I cleaned all the optics and did the GOGM again but its still having issue. It was improved (I could see faint cut marks on the backside where I couldn’t before) but still nowhere near cut through.

When I was cleaning things I did notice that there seems to be a mark on the lens. I don’t know if this is contributing to it or not. I thought I did a thorough cleaning with the Zeiss cleaner but it doesnt seem to be coming off. 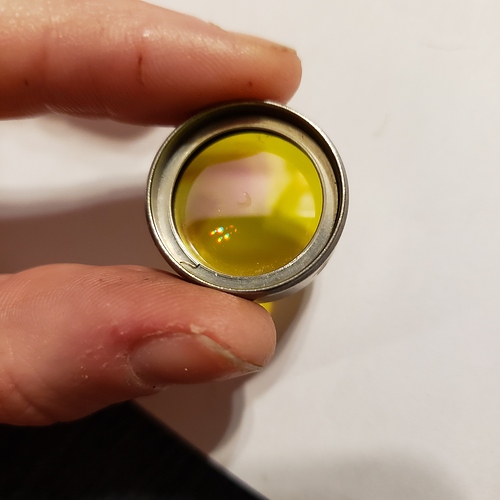 I started a ticket so I guess the only thing to do is wait.

If that’s a mark and not a reflection then it would affect things.

If you have some Isopropyl alcohol you can puddle it on the lens so it’s soaking the spot. After a few minutes try removing it again. IPA will usually soften/dissolve the crud that gets stuck on the lens. I’ve had some gnarly looking lens deposits come off that way, sometimes needing just a gentle nudge with my fingernail (softer than the lens coating so not risking a scratch).

When the head came over to focus on the material after you hit Print did the red dot hit material or a hole or something else on the bed? The red dot is where it’s focusing and if it doesn’t hit something in the same plane as the material that can cause it to be misfocused. It will use the setting it gets from Set Focus or the red dot focus on any operation you haven’t overridden.

well, I just took the print head out again and cleaned everything one more time with the Zeiss. I’m now trying a GOGM a third time. For clarification, I’m using the Zeiss spray and a microfiber cloth, not the prepackaged Zeiss wipes, not that it should matter which I’m using, I just thought it was worth mentioning.

If this third attempt isn’t successful, I’m going to take it out again and try with the 90% isopropyl alcohol.

What could possibly mark up the lens like that? A spark from something? Other than attempting to cut through really thick cast acrylic a couple of times, I’m not doing anything particularly crazy in my machine. I’ve been cutting a variety of substrates from mirror acrylic, cast acrylic, cardboard, cardstock, 1/16" acrylic, all without really any issue. The cut issues I’m experiencing seem to have only started within the past day or so.

well, it SEEMS like cleaning everything another time has solved the issue, at least, for now.

The third try of the GOGM did cut all the way through. The cut lines SEEM a little thick but I’m not an expert on that. It did all cut through.

I also tried the acrylic again, using proofgrade medium black acrylic settings, cut a variety of shapes, from tiny to large and it cut clean through.

I’ll likely give the lens another once over with 90% ISO and keep an eye out on that spot to see if it gets worse over time.

What could possibly mark up the lens like that? A spark from something?

Usually it’s not damage to the coating (a spark that hits the lens and stays burning) but some particle carried up with the smoke that then bakes on from the laser beam coming through the lens. That’s why you usually see them on the underside of the lens (harder to get stuff past the sides and in the GF not a good path for it to come in from the top). Sometimes it’ll start out as lint from a cleaning cloth.

But what happens is the relatively broad laser beam coming from the tube is deflected down through the lens. Even though it’s not focused yet it’s still powerful enough to burn badly (I had a hole in my thumb for a long time after getting it in the path of an unfocused laser

). That creates heat and bakes the particle or bit of ick onto the lens. The alcohol soak usually softens it up enough that it comes off.

That’s why the GF has the little fans under the head and you can see the smoke blow forward. It’s trying to push the smoke and any particles out of the way so it doesn’t rise and deposit on the lens. Sometimes if you you neodymium magnets to hold stuff down to the bed the little fans will stop for a second as the head travels over them and smoke can hit the lens.

So not really uncommon, but it happens and it’s just one of those things that you need to keep an eye out for.

Ask Delvie’s. They also have Glowforge settings on their site.

Hi,
I use them as well, and although I don’t have issues with getting through the material, all of a sudden the edges of my cuts are getting nicks all over the place? Not happening with any wood, only acrylic?
Kristi

You aren’t cleaning with alcohol are you?