How difficult will be to replace the laser tube? A video tutorial NOW would be appreciated

There is at least one way in which it is significantly different. That is, there may not be a way to do it such that it keeps the factory captured data accurate. In which case, changing the tube may cause unrecoverable camera alignment issues even when done by a trained pro. Glowforge themselves can use the granite slabs and calibration data capture that they use at manufacture, but they’ve explicitly said that there isn’t another way to recover that part other than send it back.

Better to describe (at the least a rough outline) what is involved replacing the tube and then let individuals decide if they are comfortable or not doing it.

Well - just saying clearly that it will be similar to that (in the video posted before there’s nothing impossible) would be appreciated.

Yeah, absolutely. This is something that definitely needs to be updated, and something they said they would have more info on.

In the US, worst case scenario is $500, essentially. We knew that when we agreed to shipping. For international customers, worst case scenario is a huge question mark. Personally, I’d be way more worried about this than I would about the replacement stuff people have been discussing. The warranty replacement stuff will affect some people. But this will effect everyone; Your glowforge might arrived damaged, but its definitely going to need the tube replaced.

That is, there may not be a way to do it such that it keeps the factory captured data accurate. In which case, changing the tube may cause unrecoverable camera alignment issues even when done by a trained pro.

If they don’t provide a way to recover the calibration then their answer to Tubegate is not an answer at all - “we’ll let you replace it but the machine won’t work well after you do”. A user replaceable tube needs to result in a machine that operates substantially the same as it did before the tube needed to be replaced.

First, each unit is factory calibrated for many tiny variations in assembly, like the precise amount various assemblies are tightened, twisted, or torqued. A unit that’s dis-assembled and re-assembled may (or may not) show a host of problems, small or large, immediately or much later: out of focus, image alignment errors, etc. Even if a machine has been properly re-assembled, it’s possible that the calibration may no longer be correct. There’s no way to re-calibrate these without the factory fixtures and factory software.

I don’t see how the tube can be replaced without dis-assembling the unit, can you? It runs almost the full length of the machine so I don’t think it is possible to remove it without taking the entire top off.

Correct me if I’m wrong, but this isn’t even going to be an issue for you since you are planning to pass on your GF and build your own laser that does everything you want it to? I would think at that point you would be able to assist people on the generalities of changing out a laser tube over in the UK at least, and that might be very helpful.

Correct me if I’m wrong, but this isn’t even going to be an issue for you since you are planning to pass on your GF and build your own laser that does everything you want it to?

I took delivery of mine, and I would like to know the answer to the question, as I am sure others would.

Absolutely – and I think it was promised that instructions and etc. would be developed to guide folks in their own replacements. I think given the length of the warranty, GF still has some time to get around to this.

Weren’t you in the process of reverse engineering your GF to see how it works and develop your own methods of achieving somethings you didn’t feel were very well done and some goals you have in mind for it? Has that work come up with any helpful ideas about how folks might replace their own tube?

I think given the length of the warranty, GF still has some time to get around to this.

The length of the warranty is not the issue. Internationals need to know the answers to these questions before they accept shipment.

Yes if I make my own I will know exactly how to replace the tube and re-align it. I have already linked a video earlier in the thread that show the generalities of replacing a tube but it is the GF specifics that the OP needs.

I can’t see how Dan’s post doesn’t mean home replacement isn’t actually possible due to the need to redo the factory calibration.

Internationals order DON’T have a lot of time - I really can’t afford to discover that I must spend 2k euro just to replace the tube AFTER the purchase (and maybe after the warranty ends). And, in the end, it’s not even fair from a business and commercial point of view…

It’s like gambling. Buy now! It costs less! But you’ll never know if you’ll be able to change a part or if you’ll ever have a place near home in order to do it…or if you’ll need to skyrocket your precious item to the other part of the world just for mantainance.

C’mon @dan …we’ve been faithful 'till now, just give us a little perspective…

I think given the length of the warranty, GF still has some time to get around to this.

No because the warranty doesn’t cover overseas shipping. So if a tube breaks during the warranty period OS customers would probably need to a get a free replacement part, pay for it to be posted and then fit it themselves. One way tube postage will be much less than two way GF shipping.

Has that work come up with any helpful ideas about how folks might replace their own tube?

My effort hasn’t included replacing/removing the tube. Though, it does seem that it will likely be difficult to change without the removal of the left and right top covers.

The quote from Dan earlier in this thread about the sensitivity of the unit’s calibration to dis/reassembly leaves many questions about the ability of users to replace their own tube.

I will say - having removed and reinstalled the covers (a few times), I have not noticed any changes to the camera-to-bed alignment. That’s not to say there hasn’t been any…

However, things like this carefully placed precision shim tell me that it may be a different story once you start fiddling with the tube and its mounts: 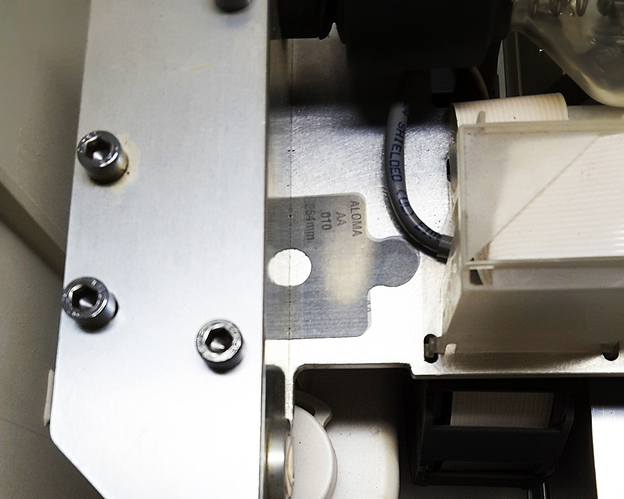 Looks like there are at least two shims in there. Raising that block ~15 thousandths evenly doesn’t make sense to me, so it must be the way they’re adjusting the angle of the mirrors inside that block. Seems crude. Shims placed like that would only give one axis of rotation, and both mirrors would be moved in unison.

Looks like there are at least two shims in there.

Indeed it does. I hadn’t noticed that.

I’m sorry for the delay in responding! Please post anything that needs a response in Problems & Support, otherwise it probably won’t be seen for a long time, if at all.

We are just providing the parts. It’s a process that’s straightforward if you’re experienced maintaining laser equipment (and not much different from other devices), and very difficult if not. Given how you framed the question, I’d say - there’ll be someone with the skill to do it nearby, but it may not be you.

At the outset, we won’t be providing instructions because we’re not sure it’s possible for a nontechnical person to install them successfully. Sadly, if we provide instructions, we’re liable and responsible for people using those instructions successfully, which is a barrier we don’t know yet if we can clear. It’s like a car manufacturer selling engines for the cars they produce - they won’t tell you how to install it because they can’t be responsible if you don’t do it right.

That said, I believe the software team has tools to make sure the power output calibration’s properly updated - I don’t know the details but I believe the plan is that you email support the tube’s serial # after it’s installed and the new calibration data is loaded for you.

I want to be conservative here because I know the stakes are high. Unfortunately that means if you are only interested in your Glowforge if you can replace the tube yourself, and you haven’t replaced a laser tube before, I’d have to recommend either waiting until the first customers opine on how tube replacements go, or cancelling and obtaining a refund.

What about your comment that we shouldn’t open the case as it it will affect calibration but the case needs to be opened to access the tube?

After the tube is replaced will the beam path need calibrating or do all tubes line up exactly the same?

Just confirmed with the software team that, if you install a replacement tube, you’ll send us a picture of the QR code on the tube and we’ll update your system account with the correct calibration data.