How small does scrap have to be before you cannot make something?

I just got new sawblades for my scroll saw to turn the holey sheets into small scraps that fit in the various coffee cans and Iced tea cans etc that I attempt to organize into long thin pieces, roughly squarish retangular, 4 sided squarish or triangles from “circles” that are perfect for these, and of course matching finger long pieces. Of course I need one for each material, if there is enough volume to make a difference, or at least to separate plywood, hardwood, and acrylic.

I’m afraid I’m out of space to store any more tools. Was about to buy a lathe a few weeks ago so we can turn our own rotors, but no where to store anything. The garage barely fits the car. I almost contemplated buying a shed (they are on sale at Costco at the end of the month), but decided against that too, I really didn’t intend to live here forever, and I don’t want to get too comfortable.

didn’t intend to live here forever, and I don’t want to get too comfortable.

Of late I have had enough discomfort that I feel really sorry for the younguns that will grow up in a different universe than the one I grew up in. The bank account will not last forever, but barring something like a hurricane, this will either be my last house, or it will be better than the one after.

I made the mistake of thinking that my husband’s company would transfer us again. They moved us to CA, but I thought it was temporary. At the time, house prices were still reasonably low. I should’ve bought something then, but the stress of moving cross country and the issue that came up because of it didn’t make me want to buy a house here. Then, just like I thought it would, when we were commited to buy, my husband was transferred back east, which was supposed to be permanent. Unfortunately, they changed their minds, told us 8 months…then after a few months, decided they really need him back in CA, so we came back very abruptly after 4 months.

There was no time to plan and even search for a new place…and in that short time period, real estate skyrocketed…So, owning a house here is out of the question now. Even a condo in the area is out of reach When we went east, I could get a 2 bedroom condo here for about 200k, when we came back (and even now) those same condos run 400-600k.

I have been shocked here recently as the Bush crash made realestate real cheap that did not recover. Seeing the handwriting on the wall last election I sold at give-away prices as I was seeing my saving vanish and could not build the 4 - 500k townhouses that were possible at that location, So now someone else is building them.

We have not yet seen the major crash as we are like the coyote that has not realized he ran off the cliff, but those with the money have been buying everything up expecting to keep increasing rents forever. However between all the job losses and evictions blocked, when the coyote looks down, the foreclosures and evictions will put a big dent in house prices, just as 10 years ago. California is a somewhat special case as the amount of housing stock has been dropping tremendously, and just getting back to before will be steps back more than forward, as the fires are not going away.

A hurricane could do that here, but if it does I will not have much to move anyway,

can you add tiny ‘horns’ to the inside

The ridges work well for wood to fix a sloppy kerf and keep things tight, but that is because the wood gives and squishes.
With plastic, it just tends to force a crack on thin projects, or if thick enough body to resist a crack, will force a visible air gap on the pieces (no give with plastic).

I ended up giving 2 smallish boxes of scraps to friends who do mixed media art - I’m hoping they’ll use them and assuage my guilt at otherwise throwing them out!

I thought I could use mine as mini roofing shingles, but they were too thick to look nice. Today is garbage day, and I feel lighter having been rid of them.

I should look to see if there are takers in the art world here.

Have you all seen the Make notebook on CNC joinery? Scroll down a bit and there are some great examples of different types of edge slots with detents 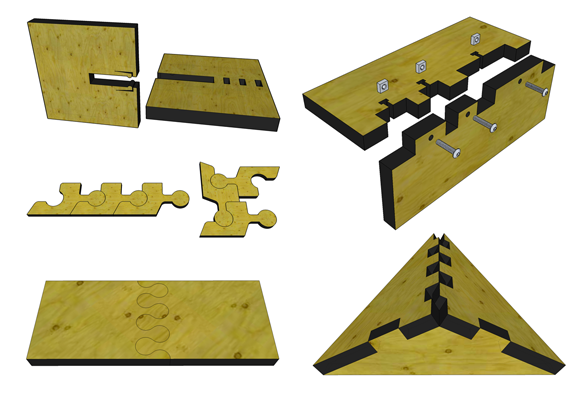 Thank you; I had not considered that about the acrylic. Although, I did see them incorporated into a design for a top, so it wouldn’t come apart when it inevitably goes off the table. and why do I know that?

@ekla thanks for the link

Just got some acrylic resin, I think I will try a ‘crazy quilt’ mosaic and see if it’s worth keeping the little scrap. Yes, I hate to throw out stuff that might have a use, but this is a small house, so…

Cook? what is this ‘cook’ of which you speak?

will force a visible air gap on the pieces (no give with plastic).

That design actually has a lot of “give” and I considered having them be just a hair narrow with a bit of a square area, matched by a square engrave on each side.

Making a lot of hanging things, earrings, pendants, light catchers, and other decorations, that might be hanging on jump rings but would like to have bails of the same material. I had played with wooden chain that was not a spectacular success but it suggested a way that such a bail might be made. This design is a bit extreme and every case might not survive, and the trick to making it work is in making it spiral rather than opening the gap in the same plane but it does work as seen here… [IM…

Unfortunately, it’s the main chore I must do since no one will do it for me.

I must do since no one will do it for me.

Lol, I wish something like that would work, but unfortunately it doesn’t. I have one who will eat everything in a nasty hodgepodge collection she makes herself, and two who decide eating is not worth the effort. Since I can’t afford to keep buying new clothes and groceries daily, it’s a chore I must do for the rest of us to survive.

My rule for scrap was to make meeples until they wouldn’t fit anymore.
Now I have too many for Christmas presents and a brand new pile of scrap to decide what to do with! 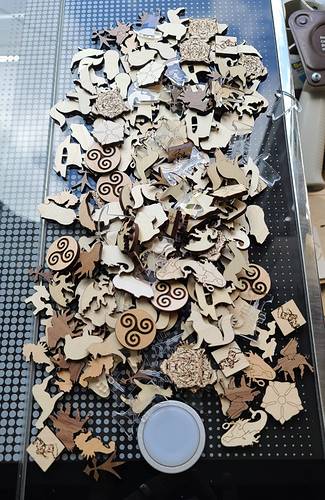 I had to google what a meeple is. That is interesting, I never considered using game pieces that didn’t come with a game before.

I think the majority of the scraps I was holding on to were more like “possible stud earring” size. A meeple wouldn’t fit. The remaining scraps I have would probably fit small things like that.

brand new pile of scrap to decide what to do with!

Those are cool shapes! I would turn them into business cards (putting your shop contacts etc) and hand them out to any you meet. They will not be throwing them in the trash as they might any paper card,

I use them to make small earring cards. the file came with an earring pattern i had so i just change the engraving to suit whatever the earring topic is