I trust you, which 3D printer to buy?

I looked up the Robox (because I had never heard of them). Those look really nice!

I am not currently looking for a 3D printer, but if I do get one, I will probably try to get one of those (if they are available).

@ben1: Thank you so much for the detailed reply! I was not aware of the CEL Robox printers. Not cheap but clearly you like the product. IMHO a fully enclosed 3D printer is essential for filaments like ABS, something the Prusa printers lack. The Prusa 3D printers seem to have improved over time. I love the open-source, “self-replicating” mantra (and the ability to print your own replacement parts) that Josef Prusa is following. Being involved with product design, I know that there are some things that you simply don’t discover until you put 1000s of devices in the field. By the time you get to 100K+ you’ve got most of the bugs worked out. When you approach 1 million all the defects tend to get resolved—or you go out of business! I doubt that any of the 3D printer manufacturers are there yet.

@bill.m.davis I have four single material Robox printers, the first model that came out in 2014, and three dual material units. I have used the Pro and it is also a good machine with some additional features that make it really nice, but I don’t have space for it in my shop so I haven’t gotten it. If I did, it would replace the Prusa machines. I don’t run as much printing work as I used to so I don’t have a way to justify the cost of the Pro.

@lightner You can print ABS and PC on the Prusa, just use the draft shield.

A fewer number of well-used units can give you as much or more information than a large number in my experience. A company also has to have a good marketing and manufacturing team to succeed. Those have been the Achilles’ heel for CEL. They didn’t get enough word out early and had some early manufacturing issues that caused problems. They got those under control and turn out a good product as far as I am concerned.

Interesting to see the responses here, I have a 3D printer also, but I have this one that I bought without knowing anything about them: 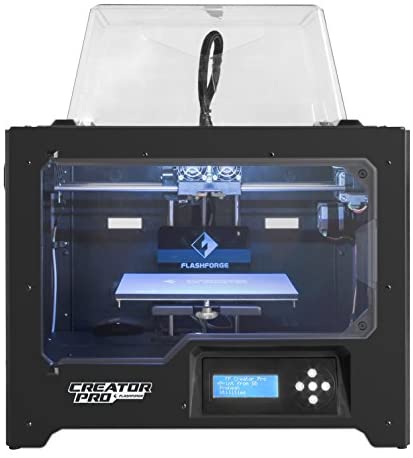 Reviews were pretty good, no assembly required, etc. I still use it for odds and ends, and wish I could actually design something for it, but it seems my brain just doesn’t work that way. And actually, I do like the fact this one has dual nozzles, I have one of the two that is clogged, and I can’t seem to get it unclogged (caused by me not removing the PLA and then letting it sit for weeks).

You will probably never be able to clear that nozzle and should replace it. PLA when overheated bakes into the nozzle and can’t be cleared with less than some really nasty chemicals. PLA also absorbs water and swells, so anything not heat damaged will have filled every crack and crevice and will be next to impossible to get out without damaging things. I really dislike PLA. While it is touted to be eco-friendly, it really isn’t because it takes special industrial equipment to break it down and no one has set up a feasible disposal service. It has a poor service temperature and is hard to print with because of its low tG. I much prefer PET.