Yeah, what they said. Good ventilation and cleaning/caring post cutting and you should be good - despite the entire rabbit warren worth of info (sometimes contradicting itself) about leather and lasers.

This is chrome tanned straight out of the laser, and then many years (and wearings) later:

this is why I only use human skin for my lampshades.

Based on something I saw this morning, I bet there would be some interesting things to be done with seaweed: 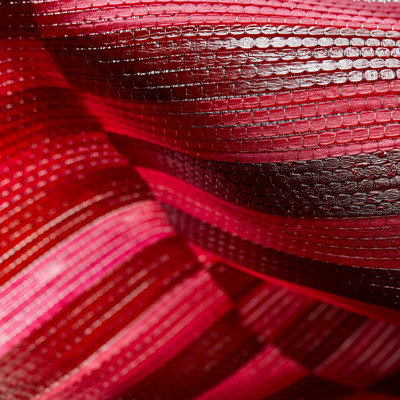 how much damage the cattle industry does

Massive damage. I’m sure you’ve seen the satellite time-lapses of cattle-grazing land being carved out of the amazon. gotta have them one-dollar burgers.
But I love eating beef, so what to do?
Baby steps. Buy good meat from smaller, local ranchers. Ones who choose to use better practices. The price is higher but the money stays local, and the meat is better. Be open to changing habits as more alternatives are developed/become available. (have you tried an ostrich burger? nom nom nom!)

it’s quite arguable that we shouldn’t be in the leather business at all, instead look for fungus-based alternatives and the like.

totally, and you would have a strong argument. Fungi are way underused. But again, baby steps. It’s not like there aren’t other tanning methods already available, or that chrome tanning is some traditional method that needs support.

It’s tough being an ethical consumer. Nobody can chase down the entire supply chain to find polluters.

that’s very, frustratingly, true. And our collective definition of what is and isn’t ethical changes over time, as does our understanding of the impacts of certain industrial processes vs. others.

I normally just shut my mouth about this stuff on here. It makes people mad. Nobody wants to hear it. I don’t like hearing it, I don’t like saying it, and I hate the cognitive dissonance that I experience as an artist: how much damage and waste is created by my art, and is it worth it?
But I don’t ignore it. I can’t. I don’t have the ability to blissfully ignore, for example, that another useless trinket has been made from and endangered wood species, or that some people’s concern with safety only extends as far as their exhaust hose.

I don’t stop painting, but I stop using certain products. What’s the longest lasting, most brilliant, uv-resistant, full-coverage red paint that I could use? well it’s lead-based paint. But I don’t buy it (yes, before you ask, it is absolutely, bewilderingly, still being manufactured and available from certain parts of the world). I transitioned from printing on PVC-based wrap material to PVC-free material that costs almost double… but it lasts twice as long (and installs beautifully!)

that’s not the entire warren. That’s just barely inside the entrance

As I understand it, chrome-tanned leather (and associated chromium salts) are avoided by knife makers in sheaths because continued exposure will affect a metal knife blade. From what I have read, this is much more of a long-term issue - as opposed to the near-immediate damage that can occur when laser engraving/cutting PVC. In addition, there are concerns about breathing fumes from lasered chrome tanned leather. There is NO comprehensive list of all the chemicals used in chrome tanning. Every tannery has their own secret formula.

I use a lot of leather in the GF, primarily veg-tan since it is generally much more predictable and gives me better results. However, I’ve used chrome tanned leather occasionally for about 4 years now without any noticeable ill effects.

I’m not a scientist declaring all leather safe, just that I believe adequate ventilation allows me to cut all leather (excepting faux leather with PVC) without damage to me or my GF. I suggest each person needs to personally research the subject and find a path on which they feel comfortable.

When the animals life is taken it gives you a complete tanning package as a bonus. Every critter has enough brains to tan it’s own hide, except buffaloes (and some people I know).
.
Adapted from Brain Tan Buffalo Robes, Skins and Pelts by Jim Miller
(Tan Your Pelts With Nature's Tools - Traditional Tanners)

Kind of interesting that a quick Google search gives brain mass results for tons of different species, even dinosaurs. Yet, American bison doesn’t seem to pull up nearly as easily.

I just want to like your post a million times. I can’t, so I’m stating it for the record.

Doing something small is better than doing nothing at all.

But also I’m laughing at how quickly we derail the threads here in fascinating, infuriating, and sometimes wildly predictable ways.

As much as I try to stay out of this debate, I feel there needs to be a fact check so that people do not stray away from this valuable byproduct.
Fact: Cattle leather, is actually a byproduct of the meat industry. In other words, ranchers do not raise cattle for it’s leather, they raise it for it’s meat. The natural leather would otherwise be tossed away.
Vegetable tanned leather, using tannin from vegetation, is far more environmental than the poly carbons, glues and chemical process many of these leather alternatives use. In fact, chrome tanned leather has even started needing safer environmental practices, although chrome tanning will never be as environmental as vegetable tanned. Protecting the environment is a huge area that many animal byproduct (such as cow leather) activists do not consider. In fact, even bamboo clothing goes through some very caustic processing ensured to endanger the wildlifes environment.
Vegetable tanned cow hide is a byproduct and that is important to know.
Onto the subject, Chrome tan is very hazardous to use in any type of pyrotechnics. The metals are released into the air and it becomes very dangerous, as well as hard to avoid, without serious protection and a mask. It is not advisable to use anything other than vegetable tanned and whether anilin dyed or not, you should use a mask. People will burn chrome tanned however the metal actually builds up in your body/lungs, so immediate toxicity is not known until prolonged exposure.

stray away from this valuable byproduct.

That was my point:

let’s talk about how much damage the cattle industry does

Whatever people are raising the cows for, it’s a pretty destructive process for the environment, carbon emissions, water use, land use, you name it.

The environmental strain I was referring to is not about the tanning process.

As for meta toxicity, you’re not wrong, and that’s been discussed before as well:

Engraving on zinc alloy? Everything Else

Generally zinc offgasses are pretty nasty. I would be sure your ventilation is bulletproof.

If you’re going to process metal with your laser, be sure your ventilation setup is excellent.

Using a byproduct is the most environmentally friendly thing anyone can do, but this wasn’t the topic, soo….

You do understand what a byproduct is right? It’s something that would otherwise be thrown into the landfills or go to waste. Using them is equal to reusing things, rather than making more garbage only to be tossed into landfills.
I’m starting to think you are just having a hard time accepting the fact that leather is better.

Just read through the last few and don’t mean to misrepresent but it seems the argument is not that leather is the worst but that there are “better” alternative reuses for the hides than leather itself was the point in this last exchange.

Either way, seems a bit into the weeds for a safety discussion.

You do understand what a byproduct is right?

This forum isn’t like the rest of the internet where people automatically start taking shots at each other. If you haven’t already read the FAQ, it’s full of guidance about community standards.

As for the rest of it:

I have no problem with leather as a material, in fact I’ve done quite a few projects that feature leather:

Anyway, @wesleyjames picked up on what I was saying and said it more succintly than I did, so there you go.

I wasn’t taking a shot, I just wanted to be sure. In fact, your original response wasn’t appropriate for community standards anyhow. As it had nothing to do w her question.

I think we disagree on community standards, This is far afield, but the general rule is that you should add to the discussion in an “agreeable” way, which I think I did. If going off topic were against the rules here, half of our discussions would be in violation. Standards are and what “feels” right is subjective, so I’ll take your feedback into account going forward.

In fact, from the FAQ:

off-topic posts that share topics of mutual interest are welcome.

Really, you should give it a read. it’s the basis of why this place is as nice as it is

This, and only this, message was my concern. Nothing else.
This message is false in regards to leather.
My intent was not to start debate, rather to speak about the leather industry being a different entity than the cattle industry, as leather is a bye-product of the food.

In fact, from the FAQ:

Speaking of @dan should have someone take a look and update some of that as it still points people to #problems-and-support for all questions and official contact.