My husband loves his. I bought it for him for Christmas. The only thing I wish it had was obstacle avoidance. I wanted to ground him from flying it after he hit a tree twice.

DJI sells crash insurance. If I were to buy a DJI product, I wouldn’t pay it, but I’ve been flying radio control model airplanes, helicopters and “drones” for a good part of my life (and I’m gettin’ old). But a few years ago I bought my dad (who, I must admit, is quite a bit older than me) a Mavic, and he’s not an experienced radio control flyer, so I also bought the crash insurance. Well worth it, as it turned out.

You know, you can actually make drones with your Glowforge, right?

This one is only about 3" across, diagonally. Flown with a camera system like in my video above, but this is for indoor “small track” racing. 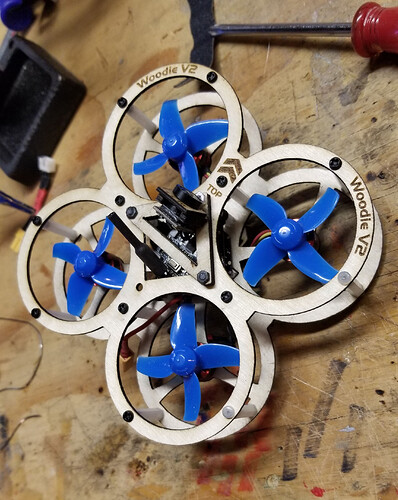 Man, that FPV is so cool! Do you wear glasses under that goggle? (Nice flyin’)

No glasses. My goggles have focus knobs for each eye, though not all do. Those that don’t have slots for lens inserts (which you have to buy or have made). If you have to wear glasses, like for an astigmatism or something, you need a type called “box goggles” which are basically what they sound like. Box shaped and big enough to fit over glasses.

FPV is great. All the excitement of car racing (I do that, too, though not as much) with no real cost beyond some damage to your quad if you crash, the pilot always walks away. In fact, you take more chances because the cost of failure is low. I take risks with a quad I would never even contemplate with a car.

Here’s a crash I didn’t make any effort to avoid. In fact, the other pilot accused me of intentionally hitting him (which is why I made the video). We both stayed airborne, but it was a close thing. And of course, another pilot got past us while we were recovering from the contact. 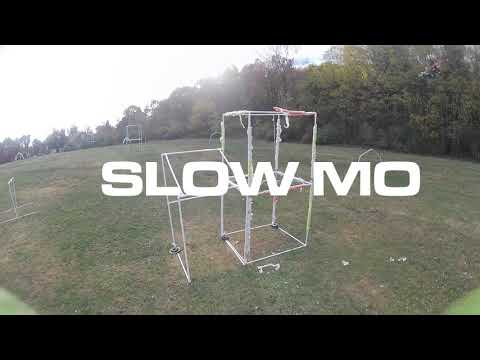 LOL. I actually did a search for “irp mini 2”. Worked a lot better when I realized it’s dji.

…husband loves his. I bought it for him…

Perhaps his next gift and any other Glowforge wielding Mini2 flyer out there can be their own case?

Wow! Thanks for your generosity. This will definitely be an upcoming father’s day gift for him if I don’t screw it up.

I made it for Father’s day for my husband. It was my first real leather project. I used gf medium proofgrade leather… And used acrylic leather paint and acrylic finisher for the first time.

It took me hours to stitch everything and since I started this yesterday, I was worried it wouldn’t be finished in time… But it’s finished… Alot of blood and sweat and almost tears (no joke, stabbed my thumbs so many times they could pull my DNA from the pouch).

Thanks again for the pattern! It was a good learning experience… And a good deterrent for any interest I had in working with leather

What a nice gift, and it looks like you were able to keep all of your blood off of the finished product. I am sure he will love it.

The blood thankfully is hidden on the inside. And unfortunately the wound was deep and kept reopening. I think it’ll be a while before I can use the finger print reader on my phone… If this wasn’t such a one-off project, I’d invest in a stitching pony.

The first thing I noticed when venturing into leatherwork was that a sharp sewing needle wasn’t useful. More often it’d actually hamper the workflow as that sharp tip would just as eagerly pierce through the hole edge rather than the lasered void.

The plan was to grab a Dremel and grind down the tip, but before getting off the seat to fetch the tool case, I just made the dull needle-eye side the part I’d lead through the hole. This meant only holding the needle by its middle and NOT instinctively pushing from the far (needle tip) end. This kept the dull tip from piercing through places it wasn’t supposed to and in turn sped up the stitching process.

I’m sure this is some sort of well-known trick if I would have scoured the interwebs before hopping directly into the deep end, but I “discovered” it works well for my needs.

The needles I used were random. I wanted something big enough to be sturdy and fit the thread, but my dull needles were too thick for the holes.

Another issue with the sharp needles was actually piercing the opposite thread, so I would not be able to pull it all the way through unless I broke the thread or ran the needle back through it to pull it out.

Also, since it was my first time, I didn’t think about the consequences of my thread being too long. It’s extreme pet-shedding season and after I waxed the thread, it was picking up pet hair like crazy (despite vacuuming and dusting right before starting - turns out waxed thread is much more affective at cleaning pet hair).

And having the thread too long increased my time taking out knots. I realized after the first row of stitching it was better to keep the thread short and add more than to deal with a long thread.

Again, the pattern was great. The leather is stiff but easy to work with. I think if I were to make something out of leather, I’d be lazy and spread the stitching holes out further so I wouldn’t have to sew as much