Has anyone tried the WOODNSHOP BB?

I ordered it right before I saw this thread. I should chill more often

Let us know how warped it is when you get it please. I assume you can just return it if it is bad.

Sure thing! Its scheduled to be here Tuesday.

I guess not all boxes are created equal. I just spot checked mine, which has been sitting in the garage since September 30th, and I would say there’s nothing wrong with it. Some of the sheets are not perfectly flat, of course, but it’s not bad enough to ruin anything I want to make. 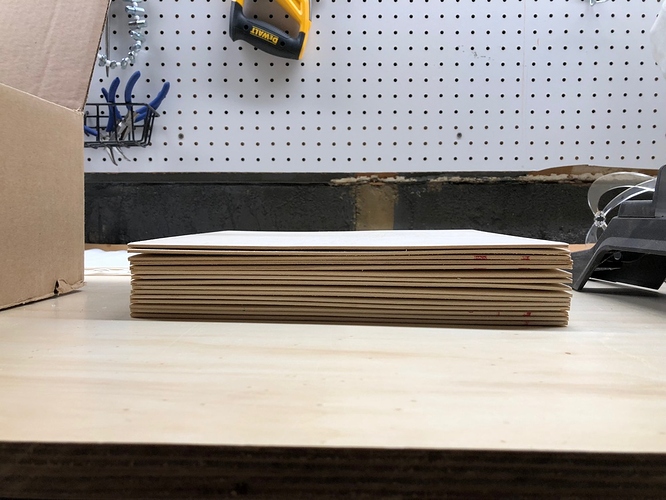 This was the “worst” I found, although admittedly I only dug through the top half of the box. 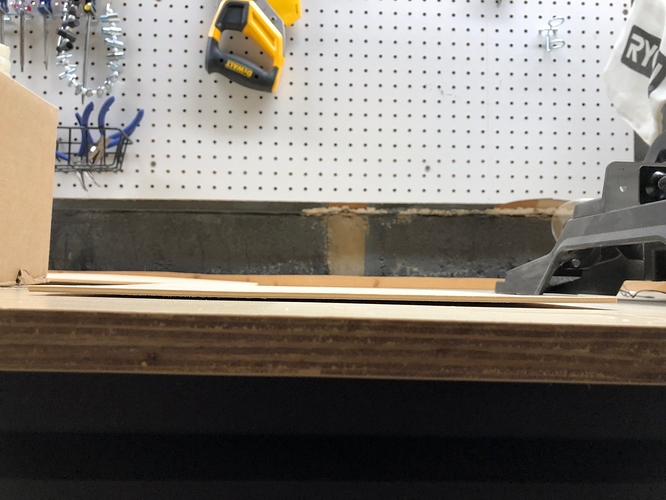 I don’t know if these labels help with lot numbers and things. 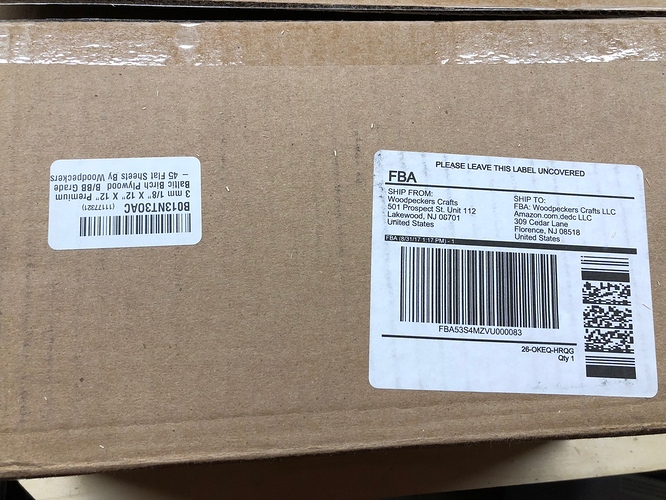 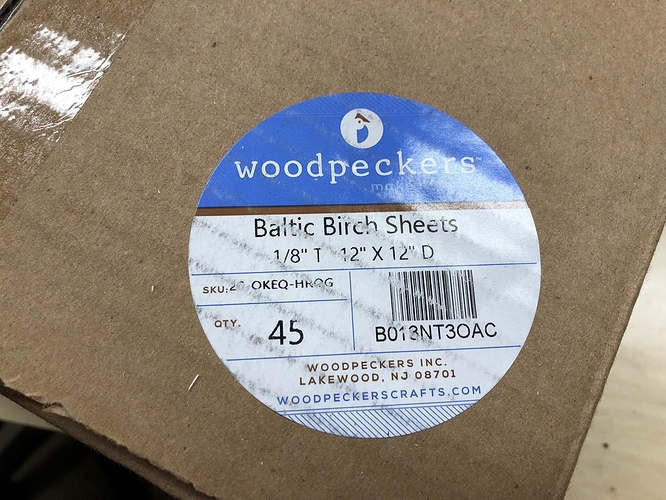 Yes, that’s not bad at all. I would have been happy with that. Mine look like they were recycled from roller coaster tracks.

Best advice to potential buyers is to open and check immediately, so you can return if you get a bad box.

I use this a lot in aircraft. When I get a new batch or cut my own from a large sheet. I alternate the warps then use masking tape t hold them. Lay it all flat on strips of ply or whatever and had weights. If the air can circulate while clamped/weighted down then many times they stay straight or return to straight.

I’ve ordered a couple of boxes of BB from them and had no issues. I guess it’s just luck of the draw.

I’ve ordered a couple of boxes of BB from them and had no issues. I guess it’s just luck of the draw.

Seems like it. I can get a large sheet of Birch ply from Dunn Lumber, and to me it’s important to be able to see the lumber and pick out a sheet that’s not overly warped. But if people are comfortable having to send the occasional box back, then go for it.

I would take the toxicity warning seriously, though. Don’t use if your ventilation is spotty.

Amazon accepted the return, even though I had used a few sheets out of the box. So it seems like a pretty low risk thing to just get a box, check for warpage, and return/exchange if necessary.

I’m late to the party here, but just a suggestion. Most larger towns/cities will have wood suppliers other than the big box stores. It took a while but I found one here in San Antonio. I simply asked a cabinet maker where he bought his wood and he told me about the supplier pretty much all the cabinet makers here use. Would not have found them otherwise even though they are pretty huge (in the volume they do) because they cater to professionals not retail, though they will sell to anyone. So far I have bought a couple of sheets o 1/4 inch (5.5mm) maple that has an MDF core. It was $30 for a 4x8 sheet which cuts down to roughly 20 12"x20" glowforge ready sheets. Cost per sheet is less than $2. Doesn’t have the great finish proofgrade has so you have to finish and mask it yourself, but on a budget it’s awesome. Bought some Russian Baltic Birch (6mm x5’x5’) which was $16.56 a sheet or just under $1.50 per sheet before stain and masking. point of the story is look around and ask professionals who use the kind of material you want to use and they might lead you to a great find for the materials you need in bulk. still love Proofgrade for the one offs, though

I cut some BB and a bunch of other cabinet wood sheets during the summer when there was a sale on, and I had it stored in a plastic storage chest until just this week. It was in good shape.

I moved it into my condo now that my GF arrived, and in the span of a few days the really low humidity of my condo has started to cause them to dry (and curl) even further. And by low humidity, I mean… I can leave sliced meat on a plate and it’ll turn into jerky and will dry out most fruit.

I’m starting to think I need a humidor.

So, the package took a small detour to Narnia for a day or two, but it finally arrived. I looked through the box quite quickly, and the pieces are generally flat, though not as perfectly flat as the proofgrade I received. The proofgrade was also packaged a lot better. This was the most warped piece I could find. There are a few pieces that bow very slightly (whereas this is, like, warped avross the diagonal. If that makes sense), but theyre hard to photograph - it just looks flat. 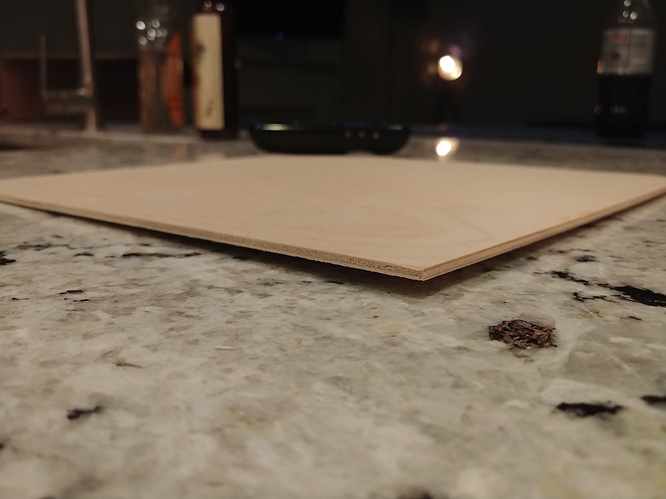 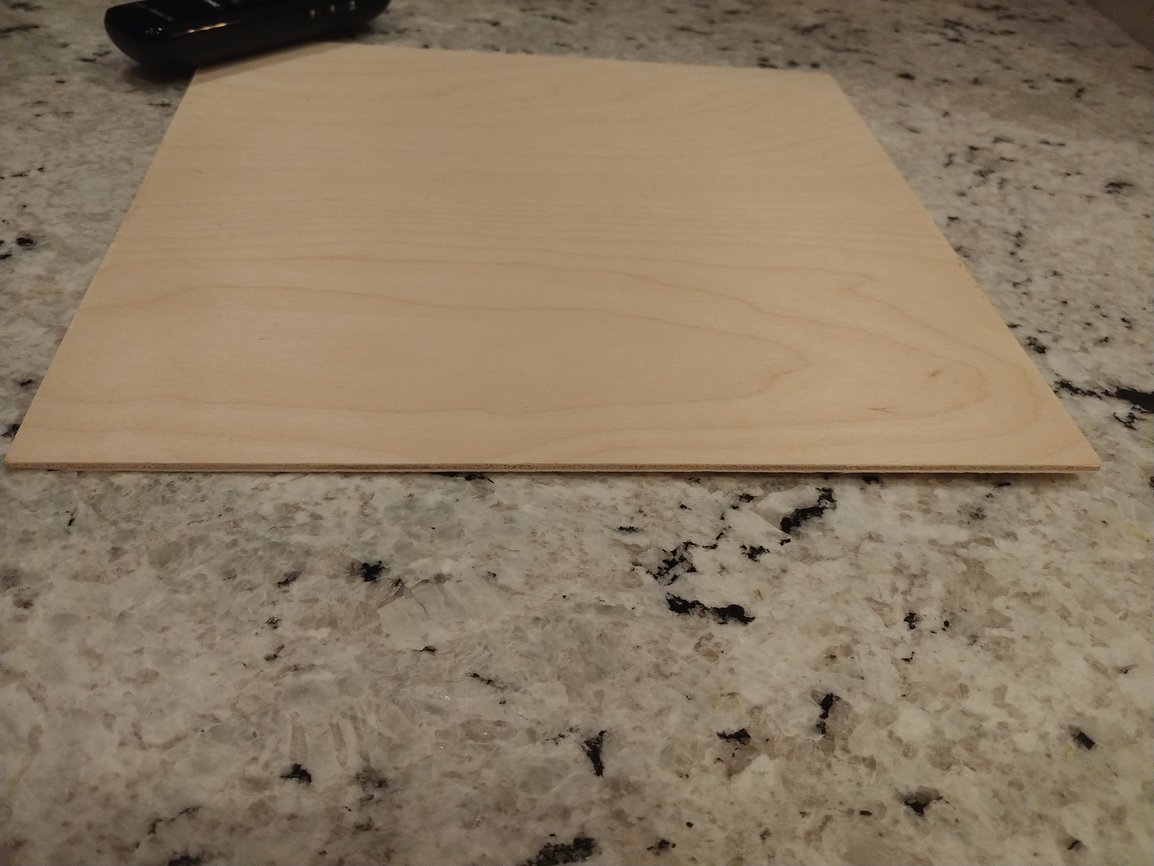 Overall, knowing nothing about wood, I’m pretty happy with what I got. Some of the edges are sort of splintery, but everything seems to be only slightly warped (all less than a centimeter, and the ones that are bowed are off by just a couple of mm in the center where it’s worst). I dont have my glowforge yet - it went to narnia too - so I dont have any practical information, but I would expect a couple of strong magnets to sort most of them out.

Also, I havent checked any for internal voids, but there are no knots or defects on the surface of the pieces. Some of them have some grain (like, wood pattern lines. I don’t know if thats technically grain) and some of them are totally… Blank? Uniform? Unwoodlike? I think my brain is fried.

I usually put it bowed side down when it’s bowed in the center so that’s the part flat to the tray. It’s easier to hold down the corners & edges when they’re bowed up off the bed then holding the center down because of interference between the magnets and the design. Easier to keep the design away from the edge magnets.

Thanks for the tip! That makes way more sense than the plots I was coming up with to use those pieces…

What are the settings of the Medium maple plywood proofgrade? Do you know?

It depends on whether you have a basic or a pro. You can select the material from the material drop down list located under unknown and then switch an operation from Proofgrade to manual to see the settings.

Where do you get the masking for your BB? Using 1.41" wide Frog Tape is not practical for large projects.

I just received some 1/8" 12 X 24" BB from Woodpeckers. There seems to be a lot of smoke when cutting this. Do you know what the core of your BB is? Woodpeckers apparently not MDF.

Masking material for non-proofgrade items Beyond the Manual

At long last, my GF arrived the other day, and I got down to business. One of the first non-proofgrade materials I want to try is Baltic birch, since I’ve seen posts from plenty of people around here who have had good results with it. But I also want to mask the wood prior to engraving to minimize scorching. So what do you all use? I have a roll of wide blue painter’s tape that could be a likely prospect, but I’d like to run that past more chemically savvy opinions here first before I create…

Re: smoke, I’m fairly sure they’re using a formaldehyde glue, although I haven’t figured out a way to inexpensively test that – but I have gone so far as to buy myself a formaldehyde-rated filter mask for when I’m cutting their BB ply (since large pockets of their glue can burst into exciting flames, when I cut it I’ve got my face down close to the lid so I can watch. This means I’m inhaling fumes even if the vent is running A-OK.)

I’m serious: if you’re going to be cutting a lot of this, buy a mask or else do as some others have done and install a much more powerful vent fan (I went for the mask since I ran out of venting room so can’t install a higher-CFM fan). Your lungs will thank you.