My Catan Board So Far

Looking really good. The wood varieties in lieu of stain is awesome. Well matched to the resource.

One question on the design though. When I made my board (on my K40

) I used just straight hexagonal tiles. Is there any play advantage or something when using the interlocking tabbed version you’re making or is it just one of those personal preference things?

Well, I considered both, and my family currently has a number of kids that have on a number of occasions bumped the table or reached in and out of innocent curiosity have picked up part of the map.

Also, there have been times that we needed to try and move the map so we could have dinner after a particularly long and involved game.

However, I have not gone so far as to make any sort of “locking” mechanism for the cities, settlements, roads, so they are still loose. Also, if it wasn’t for the GF free version already working out the kinks with the interlocking parts, I wouldn’t have pursued that path.

Hmmm…I made mine to fit inside a larger frame so the pieces were in a tray of sorts. You can mix them up but not create land chains - it’s always the same overall shape. I’ll have to dig up a pic.

ahhhhh, ok. With some of the expansions the map can get BIG. I didn’t want to make a tray that could fit all the different scenarios.

We played a scenario the last time I visited that incorporated 60 some tiles. It was huge and took awhile to set up and play.

Just to be boring here - but as a game designer I have to point out that any graphic work as part of any game is copyright.

While you are free to re-design pieces, art, components, cards etc - you are not allowed to copy artworks or graphic design from any original game.

Saying that the game is only for your own use does not make it legal.

If art - whether game, photograph, painting, sculpture, music, writing, designs - has been made by someone else - then copyright applies and you do not have free use of it.

The graphics for the Glowforge Catan Game have been expressly stated as free-to-use.

There are many places where this is discussed, but @dan had a good statement on it in at least this post (his is the third post):

Free Official Glowforge Designs? Everything Else

I love this Catan board, the project that sold me on the Glowforge, and the awesome thing is that Glowforge has uploaded it and shared it for free! http://glowforge.com/wp-content/uploads/2015/09/game-board.pdf I’m wondering if there are any other “Glowforge Official” designs that have been uploaded for free at this time. Could be cool to collect all the links in one place, if so.

Beyond that, I have modified (sometimes heavily) every single one of the designs so that they fit the use that I want. I have no desire to fall on the wrong side of the law, and we have been told that we have full use of these sets of graphics for our own Catan Board building. If that doesn’t protect us, please let me know.

Beyond that, I have modified (sometimes heavily) every single one of the designs so that they fit the use that I want. I have no desire to fall on the wrong side of the law

Since I’m not (wasn’t) coloring them, I needed to make sure the engraved images were more distinctive - when you design with color in mind that’s part of the distinction but with just burned/not burned to work with contrast in design is more important (IMHO).

I tried for about three days to create my own and I’ll point to my above comment of my lack of artist skills. I even tried using photos that were marked free-to-use and couldn’t actually get them cropped just right.

So going back to the Glowforge designed tiles was really my fourth or fifth choice. But I’m still happy about the way that it has been turning out.

While I understand you feel the need to parent people, pointing this out repeatedly in the forum is annoying. We are all adults in the forum and understand the moral and legal implications of copying others ideas, designs and works. Most of @julybighouse designs came from the Glowforge PDF which explicitly states the license.

The remainder of the pieces he has spent hours designing himself. I am using the same Glowforge design for my tiles, own a 12 year old copy of the game and I’m replacing the tiles. I am completely in my right legally and morally to do so, and I do have free use of the Glowforge design as it states.

I did say that these were not copied, but as a creative who has had thousands of pounds worth of stuff illegally copied over the years I do feel strongly about this issue. Just because this game has copyright free materials does not mean all games do, which prompted me to put the full reminder in the main forum.

I know most folk here do not want to rip off another creative, but games are often not seen in the same way as other art.

Also, in the laser community as a whole there are an awful lot of images stolen for engravings all the time.

To @julybighouse, sorry for the hijack, and to be clear was not saying you took these designs.

I appreciate any forum member politely reminding folks about the forum rules, which do include the respect of copyright. In this case, the designs were commissioned by us and licensed for free use, and do not re-use any part of the Catan artwork other than noting that the pieces was designed to be used with the board game of that name. We also obtained written permission from the Catan rightsholders to ensure that there was no possibility of improper use.

Professionally, Glowforge exists in part to help designers make a living from their craft, and we work hard to support that. Personally, as a hobbyist board game designer myself, the last thing I want to do is see people ripping off board games!

Fortunately, that’s not what was happening here, but I appreciate the concern.

OK. So I finally have got everything together for an update. I’m nearly done! It’s been quite difficult to get everything JUST right.

Some things that I learned:

Here are a few pictures of the tiles in the middle of being finished: 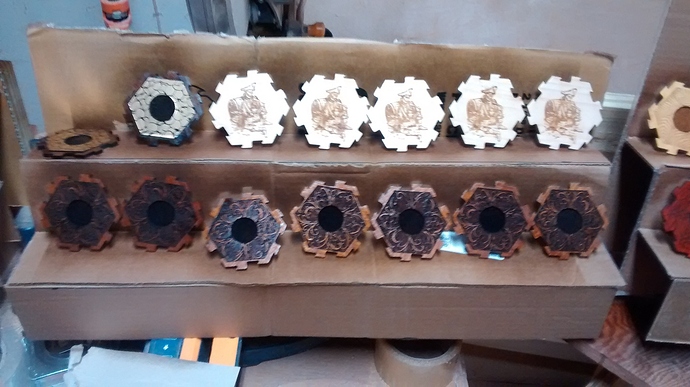 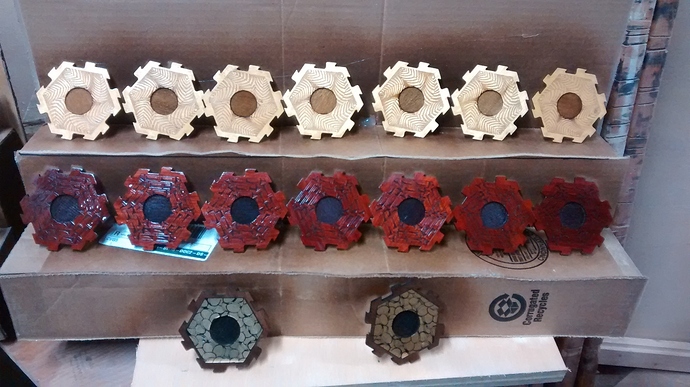 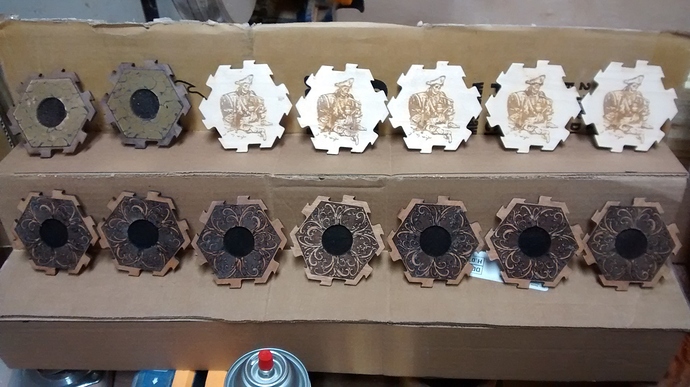 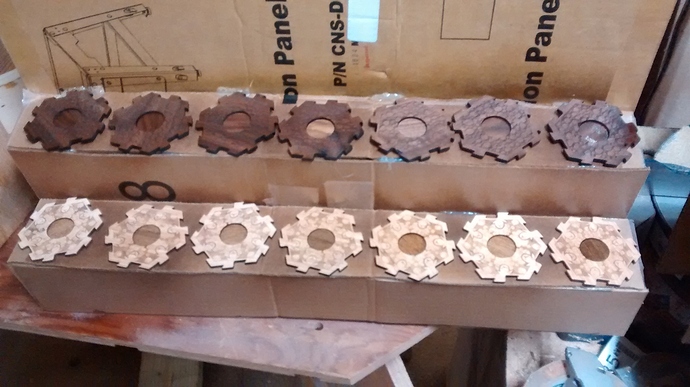 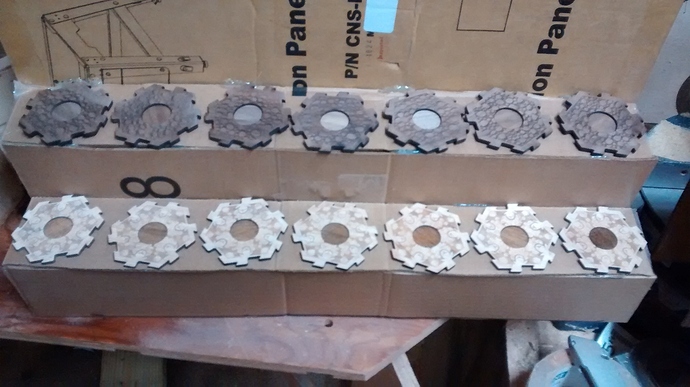 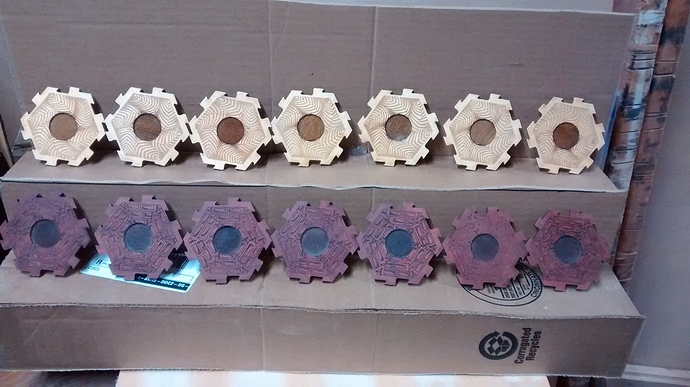 Check out the difference that applying the finish does! The one on the right is pre-lacquer, the one on the left is post-lacquer. 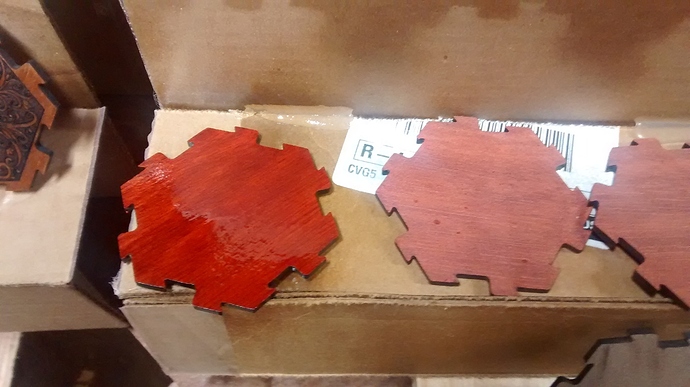 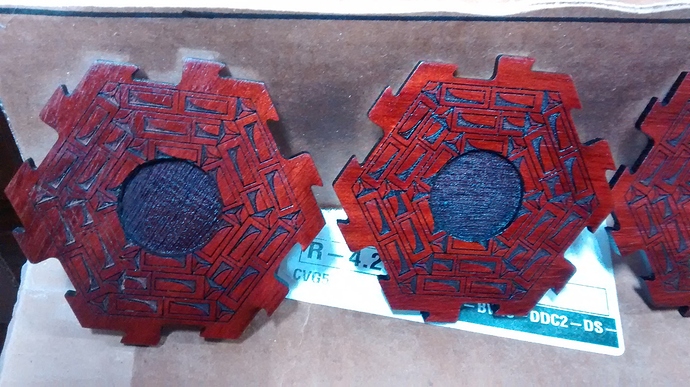 And of course I decided to make it even more difficult and make a box to hold it all in. 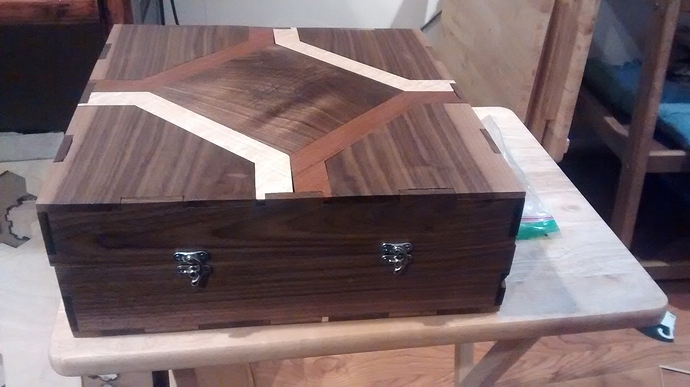 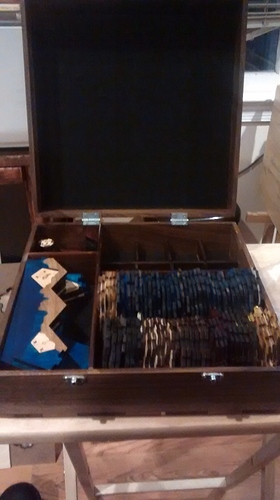 I’ve got a few things to add to the box (handles, corner and edge protection pieces). Then I have to decide if I’m going to make the player pieces (roads, settlements, cities, walls, knights, ships) and either paint them or make them out of 6 differently colored woods.

Welp, that’s my latest update on the Catan Board. Need to get this completely finished by Thanksgiving.

That looks like a lot of work. I didn’t know that the game was that big. Your box looks fantastic too. Is that non-proof grade walnut?

The only part of this project made from Proofgrade material was the number chips. EVERYTHING else is wood that I prepared myself from raw stock, tested, cut and in some cases had to redo as I discovered certain things just didn’t work the way I wanted.

Yes, the Box is made from Walnut, Mahogany and Curly Maple, but none of it was proofgrade.

The box was something of a solution to an issue I had. I needed the box to be 12.5" x 12.5" but I only had 6" wide walnut. I made the design so that I wouldn’t have to use anything larger than 6" wide. The center square is actually 6" x 6", the largest square I could do.

Wow…I’m impressed!! And that box is perfect!!

Yes, the Box is made from Walnut, Mahogany and Curly Maple

What a beautiful heirloom set! You will have to bequeath it to someone someday!

Gorgeous! Any reason why this isn’t in Made on a Glowforge?