Was getting substantial lingering odor in my work area. Just wanted to share the steps I took to reduce the odor and seal exhaust. I used self fusing silicone tape as a “gasket” around the exhaust port and placed the 4 inch vent hose over it secured with upgraded 4 inch hose clamp used for dryer vents. This added grip to the exhaust port flange and the silicone is compressible and seals the connection. The tape is removable, somewhat reusable and won’t mark stuff up. Some odor was coming from cut materials so I store them in ziplock bags, an airtight plastic box and a modified proofgrade cardboard box for the cut stock (modified= tape seams, somewhat airtight). I added weatherstripping to my removable window unit and keep it in a plastic bag when disconnected. Painters tape makes a great temporary seal for the window unit as well. 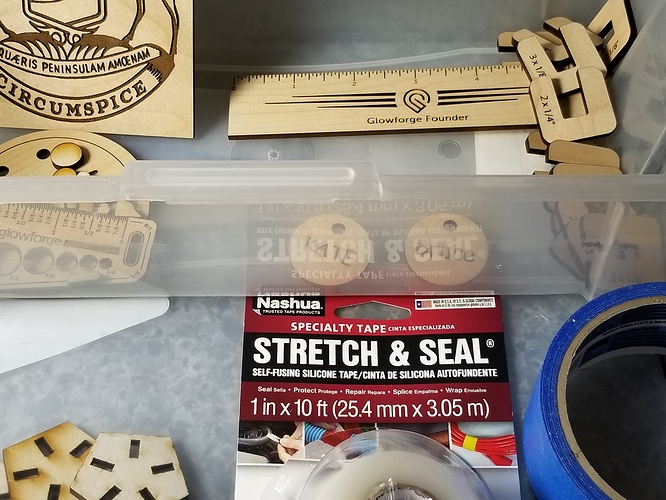 Wasn’t thinking about material storage. Ill get ready for that, thanks.

All good ideas, thanks!

That tape is new to me, looks promising.

That tape is new to me, looks promising.

Home Depot carries this as “weatherstripping tape” in widths from 1" to 4". I use it around the GF flange connection as well as the outlet connection. Oh, and the original use – sealing all the way around the window itself. My GF is in a basement room with the code-mandated escape window. Airtight is not part of the muni code.

I’ve been redoing my ventilation setup, because my basement was becoming uninhabitable for hours after cutting acrylic, and uncomfortable after cutting a large amount of wood. I applied this silicone tape around the exhaust port of the GF and around my external vent and it is drastically improved. Unfortunately, I still get a bit of the odor after the cuts are complete, because of the fan duration.

Thanks for posting this info!

Glad it was of help. I am also in a basement set-up. I have small windows at ground level to vent exhaust. I use weatherstripping at edges of the board my exhaust is set in and I use painters tape as well to make a good seal. I extended the exhaust hose around a foot away from and above the window level to minimize any back flow. This has made it tolerable, even when cutting acrylic. I’m thinking a low power computer fan at some point in the exhaust, sealed really well, might help as a cheaper alternative to the higher power fans I have seen used/ discussed.

I was doing something similar, but I finally made myself a new window with a mag vent setup. I used 3 layers of acrylic, which was about the same thickness of the window that was in the frame previously. Then I took a vent cover off of the previous vent I was using and created a multi-layer acrylic adapter to mount it to my new window. The “window” isn’t completely clear because the weld-on I used to bond the layers makes it look like there is water stuck in the window, and the window was wider than the GF basic can cut, so I had to come up with a way to layer and extend the acrylic, but overall it’s much nicer than the plywood frame I had in there before, and adds back some natural light in the basement. 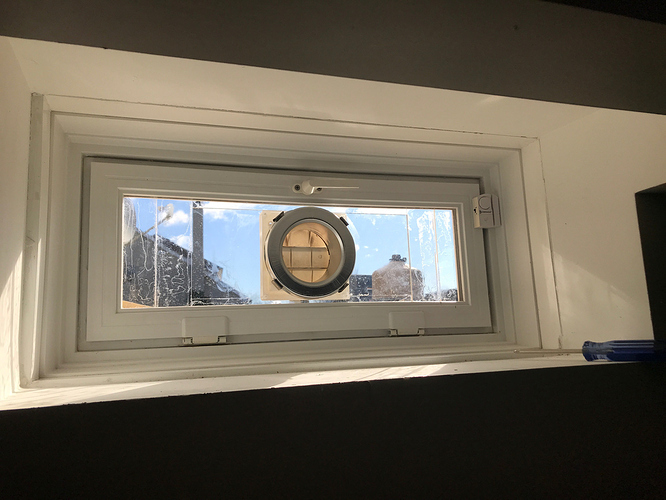 Looks fine. I considered those hose attachments as well but wondered how airtight they would be. I will only use my GF as a “weekend” warrior so a removable unit is fine for me. Great job on an enduring solution!

Funny story:
I had recently been wondering why there was more smoke and odor than usual from my GF. I had fashioned an acrylic pane to my basement-level window to facilitate the exhaust which was great so I figured it was just the materials I was experimenting with. 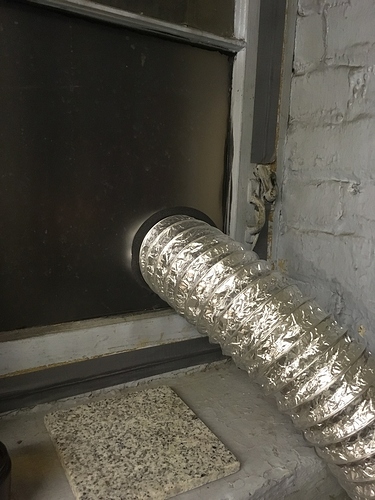 IMG_7790.JPG866×1154 251 KB
THEN I NOTICED THE CAUSE!!!
I live in Brooklyn with the bins outside the basement window I vent from, I guess one of my rodent neighbors had used the vent as a portal and had an adventure on my workdesk!! 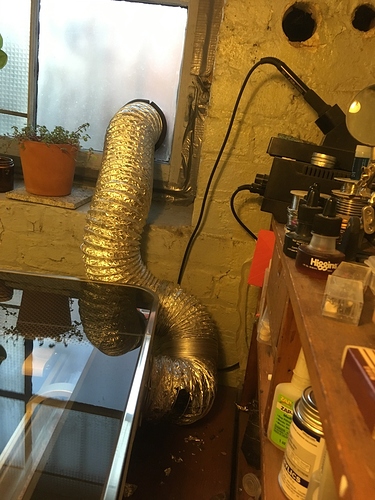 IMG_1895.JPG866×1154 336 KB
As it happens I used to keep rats as pets and can recognize their signature (and wasn’t freaked out). The shop is separate from my house and there’s no further evidence of damage - just a visit. You better believe I have amended my vent access though!! I love ratty attention but not this kind.

Anyhow all fixed now and I had a laugh. 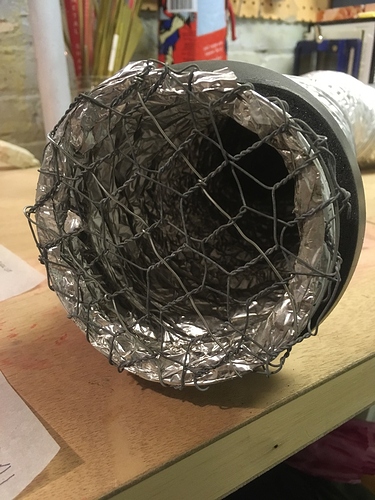 There may not be alligators in the sewers(or turtles) but the rats are cats.

Yeah, unfortunately I’ve seen them that size. Back in college, in an old house apartment we were renting. Eight inch tail.

(He casually strolled into the bathroom while I was taking a bath one morning. Daylight, bold as brass. Was out of that house the next day.)

I’ve been bitten by rodents…it’s no fun. You bleed a lot.