I’ll second @Joshua with the Onshape suggestion. As someone who used to model stuff in SolidWorks, I’ve found Onshape really easy to transition to–it’s a very different approach to CAD (given that it’s cloud/browser based and all) but it seems like a great idea for a lot of use cases. I guess the only trick will be in figuring out a workflow for using the Glowforge to produce parts designed in Onshape… My current thought involves using the technical drawing environment (Onshape’s version of like DWG Editor) to spit out DXFs of the individual parts? Depends on how DXF support works out with the Glowforge, though.

I’m really excited about Onshape, as I works on my Mac (unlike SolidWorks) and has all the assembly and constraint functionality SketchUp (my current CAD platform of choice) lacks.

I’ve played around a bit with Onshape recently, and I have to say I’m extremely impressed. It’s a totally different way to design parts than I’m used to, so the learning curve is a bit steep, but its worth the time investment.

I also like that it runs on iOS devices as well, so if I’m on location I can pull up a part and demo it.

@chris Part creation in Onshape is pretty much the same as SolidWorks, Geomagic Design, and other parametric CAD packages and that’s largely why the transition has been so easy for me. Funny that you mention SketchUp, though, because I find that program to be infuriating to work with… but that’s probably because I started with SolidWorks.

@PTPetra I’ve been using SketchUp for around 15 years now, so I’m super efficient in it, and push it close to the breaking point with how complex some of my assemblies get. Because I know every inch of it, I can crank stuff out super fast, but it does not hold a candle to proper CAD applications like SolidWorks when it comes to DFM, making precision assemblies, etc.

I’ve been wanting to get SolidWorks for years, but their lack of support for Mac and super expensive licensing (no tier for makers or small businesses) have been deal breakers. But Onshape has everything I need.

Their pro licensing of $100 a month is super reasonable, but it’s a bit too much for me to justify when I’m not generating a lot of revenue purely from CAD projects. Maybe they’ll add an additional licensing tier for folks like myself that are somewhere between the free plan for makers/students and folks who do CAD for a living. fingers crossed

Though this topic, I found out about @polarbrainfreeze’s videos on SketchUp. While we’ve been giving SketchUp some grief about the UI specifically and its ability to be precise, it may be worth another try after watching some of his videos.

Every Fab Lab has a Solidworks license that you should be able to use for very cheap or possibly even free. Look around to see if there is one near you.

Yes, I have to give SketchUp a good mention. I’ve been using it for years for different applications. It does not have all the features of a full-fledged 3D cad software. But it’s free, and I do not feel I’ve been limited by it at all. I love how quickly I can do something with it.

I also love that there are TONS of online tutorials. I had no 3D modeling experience, and through watching the videos, and by playing with it, I’ve become quite good at modeling things very quickly. My blog has some good screenshots of what I’ve designed with SketchUp. (http://polarbrainfreezethecut.blogspot.ca/). Anything that looks like a “3D model” was done with SketchUp.

Sketchup does have some problems, but you learn to live with them. I think the thing I find the most difficult is making adjustments to my models after the fact. For example, if I modeled something for 1/8 width and then decide to cut it in 3mm width, but I don’t want to change the overall dimensions, then it takes some time to make adjustments. I’ve been told that other CAD software makes this easier. But I don’t do this very often.

I recommend you at least give SketchUp a try.

You can do the type of parametric modeling you describe in Autodesk Fusion 360 and OnShape, both of which you can use for free and have lots of tutorials. Happy modeling!

Anyone use Blender? I have tried at various times and it’s still a mystery. Not sure if it works for static 3D or more for animation. I would guess there are plugins that could be very helpful. For me, Sketchup works very well for any project I can think of, and more if you get Pro and some of the paid add ons.

One or two more to add to the list:

+1 for OpenSCAD. Super powerful in conjunction with Inkscape.

The Processing language seems like it would be useful to the GF community. https://processing.org/

The syntax will be familiar to anyone who has programmed in Java or C++. Although it is mostly used by artists creating interactive installations, it is also very good at manipulating and creating images.

It has the capability to read/write most popular raster formats. But it can also import and manipulate shapes in SVG files, and even manipulate the child shapes within the file. For example, one of the demo programs loads an SVG file containing a map of the United States, with each state defined as a child shape. It then changes the fill color of a couple individual states and displays the results to the screen.

It also has a good selection of 2D drawing functions including bezier curves.

And it will output both PDF and DXF files. To create a PDF file, you just call a function with the name of the file, the format, and the dimensions. After that all of the commands to draw are directed to the open file. When the program exits, the file is automatically created and saved.

I’ve been toying around with some designs using paper that I’m going to test with my die-cut machine. If I come up with anything I like, I’ll post the PDF created using Processing and a photo of the final result.

Whoa, I hadn’t considered Processing! That’s a cool suggestion. I’ve only used Processing for artsy programming applications in the past, but it sounds like a neat suggestion for creating vector graphics programmatically, beyond your average modeling tool.

Surprised no one has mentioned FormZ yet. The Jr version is free.
Also, for anyone already on the Adobe Creative Cloud subscription-it includes Cinema 4D Lite when you install AfterEffects.

I use Blender to model jewelry for 3d printing and plan on using it for my GF as well. While it has a heavy learning curve, it does have a LOT of flexibility… However since it is an ever evolving program, there are many features that traditional drafting programs have that blender does not, or that blender does differently…

I wrote an app in Processing that generates Voronoi diagrams and uses the resulting polygons to create a layered image. If it generates something I like, a press of the “c” key creates a PDF file with the layers separated into vector images.

I’m not certain if anyone is interested in the application, but I might post it as example code after a little more work. I wanted to take a stab at creating my own algorithm to generate the Voronoi diagram, and it isn’t always successful. Sometimes it generates a glitched-out mess. I know where the problem lies, but don’t have a solution at the moment.

But when it is successful, it generates some pretty cool images. Here’s one that I cut on my die-cut machine, and the PDF file. 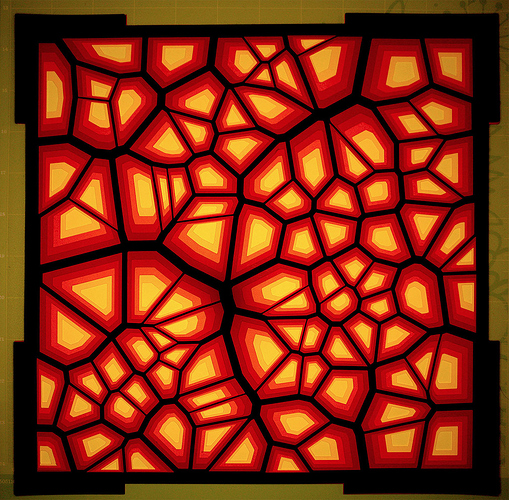 Edit: Just wanted to add that although this looks okay cut out of paper, I think cutting it out of transparent colored plexiglass would be better. Kind of a modern take on stained glass.

very pretty. does your program generate totally random, or does it start with a set of variables or click points?
I had not heard of Voronio diagrams before, but googling brought me to this generator. Thats not yours, is it?

I’m thinking of modifying it to read seed points from a file as well. Should be really easy, but I haven’t written any code to read text files in Processing before.

The generator you found online isn’t mine, but it’s fun to play with.