Over 10 feet vent hose for Glowforge?

that’s a great point - i don’t worry about noise so i didn’t think about it (even though i know better from putting together my computers).

I’m curious, what is the problem with having too much fume extraction (i.e. vacuum)?

I don’t know if internal hardware (fans and other components) would be effected. I think @dan has commented that the GF

is designed for around a 200 CFM airflow.

You can also collapse flexi vent tubing with too much negative pressure.

The two fine examples make sense. Is there anything that would affect the actual operation of the GF Laser?

There is an unanswered question that’s been floating around: Is the fan in the GF isolated so that “windmilling” doesn’t create current that could potentially damage the electronics. I don’t know enough to know if that’s even a valid concern. I’m just throwing that out there.

thank for reply. Here is draw. 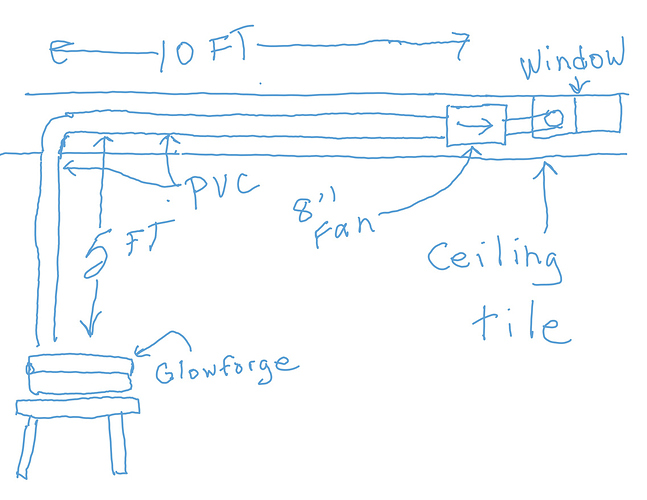 That is going to work well for you.

That will keep in step with the GF

exhaust (until you can test material that might come loose during the lasering).

Do we know if @dan has confirmed peak air flow so we can calibrate booster fans?

Update for you and @MikeH: I found an old email that says the fan puts out 200 CFM. That might have changed but is likely to be correct.

@volivaa I’m just going to put this here because the topic sticks out in my head… Witness the size of this motor. If you attach this to a Glowforge, I’m pretty sure you’re going to be sucking at least twice the force of the Glowforge’s fan. You may be able to disconnect the Glowforge fan (not recommended) to leave it free-spinning, but then you might have to worry about the Glowforge case caving in from the suction.

Something to consider with putting a higher-draw fan at the end of that length of hose is the hose pressure rating to prevent collapse. You wrote down that you’re using PVC, which is fine…

But if you have a high draw fan at the end, and a weak walled dryer hose, the suction could collapse the hose in on itself like trying to suck a thick milkshake through a cheap straw.

I have a similar set up for my

in my basement office. Appox 12 ft along the joist. I put an inline assist fan plugged into a switched outlet and it works great.

Teditz, Thank you!!. I will look for inline assist fan in website. I think it will work. Thanks, again!

No problem! Your sketch look awfully like what I have. Only difference is that I drilled a whole and you’re going to a window.
Wish you the best with it.

Where is the inline filter located? Closer to GF or closer to the window?

Do you mean the the fan?
The way I have mine set up is the flexible hose is attached to a rigid tube that goes outside. I have the fan about halfway in the rigid tube.