Grab a shoe shelve from Home Depot ($13) and put your cricut on top with a shelf & the tabletop for larger pieces of material you want to stay flat. I did that for the Cricut station at the Makerspace to prevent the sheets from all ending up bent out of shape (including those plastic bottom sheets you stick lightweight stock to in order to cut).

The plastic bottom sheets you stick stuff to are hanging on the wall. (I’m pretty sure there’s a name for those, but I can’t think of it right now!)

The Cricut is actually on its own Ikea Lack table underneath the desk. It has just enough space above it to comfortably open the lid and to allow for tools to be stored in the tool holder, but not enough to make the empty space behind it convenient for collecting clutter and interfering with its operation. (Because if there is open horizontal space near my bed when I am laid up, it WILL collect clutter.)

Actually, it will collect clutter even if I am NOT laid up. sigh

I’m pretty sure there’s a name for those, but I can’t think of it right now!

I think they’re called cutting mats. What an obscure name, no wonder we couldn’t think of it!

What an obscure name, no wonder we couldn’t think of it

Shouldn’t they be “non-cutting mats” since the idea is your paper gets cut but the mat doesn’t?

A quick way to hold a pencil using wedges: 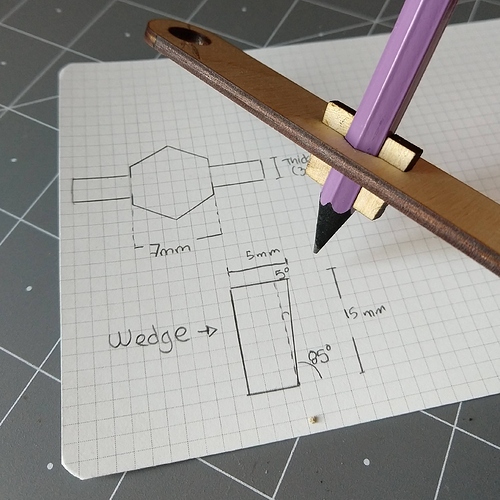 more about it here: Attaching a pencil with no fasteners

Quicker would be just one wedge? Pushing against 3 faces may hold better, if not so symmetrical?

ooooooohhh, I need to design one for my Kcups!!! Beautiful!!!

So what makes it practical is, better than a plastic bag, a single sheet of draft board, friction fit (with a lot of help from a two-pound sand mallet) and holes in the bottom. Also, the backside may have Grapes a bit backwards. Practical does not equal blank. 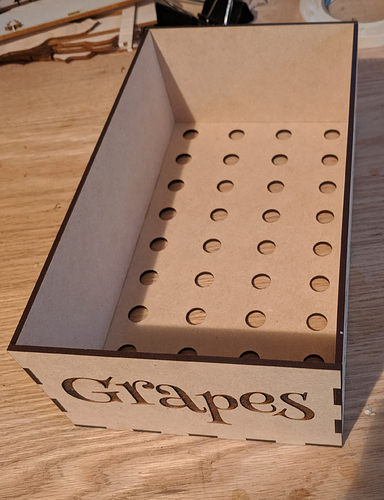 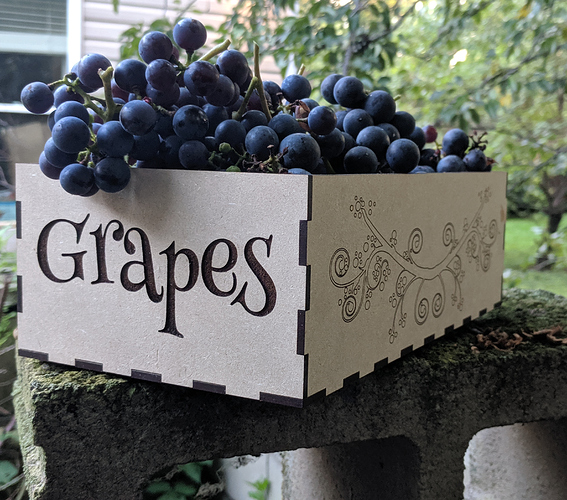 Oooh - from someone with a roommate who always buys too many grapes this is brilliant, and the holes in the bottom even more so! I may build one like this with little legs so the holes are clear from the fridge shelf.

Thanks for the inspiration!

Cat litter tray Made on a Glowforge 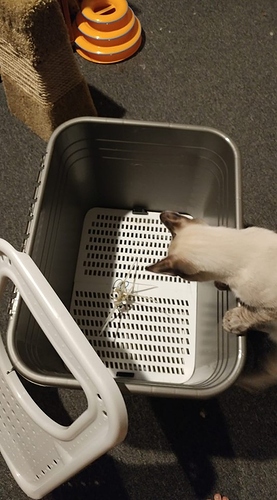 Practical cuts Everything Else

Nothing Fancy, and not entirely laser cut. For the cutter part I’m reusing the one that came with some packing tape. The base and the roll holder are made with 3/4" plywood. [tape-dispenser] [cutter] SVG in case you want to develop further.

I bought a water cooler for an upgraded CPU without reading the installation instructions. The fan block needed to be installed vertically against the front of the case, and my case was not designed for such a thing.

After removing some excess parts I decided to mount it outside the case where there was an ideally sized spot. Now to secure it… I cut a shelf that slides into an old drive bay and locks the block in place. 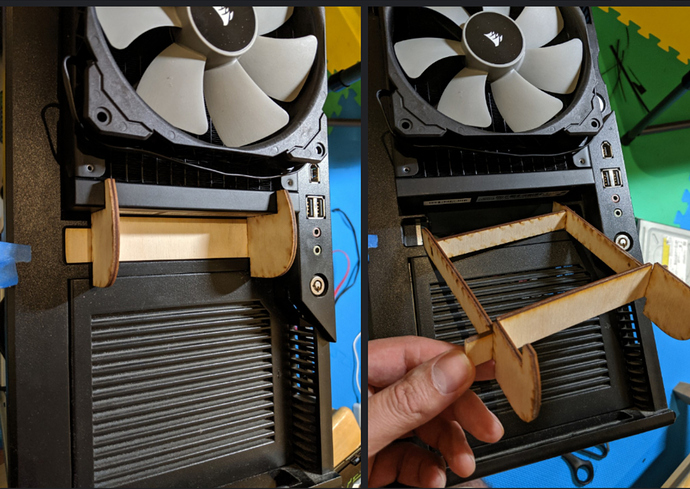 Not shown are a couple of simple support struts installed behind the block. Everything pressure-fit in place and rock solid. 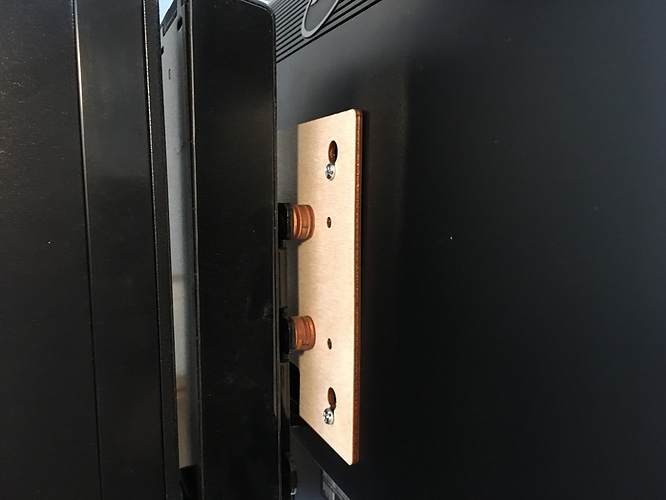 Terrible pic but the mount system that I cooked up way back in the OP was easily adapted to the new monitor – the new one has a 100mm vesa mount, as opposed to the 75mm vesa in the original. Gotta love that sort of reuse, the most practical of cuts.

Made a grid wall shelf into a shelf that’ll display spindles in a festival booth. 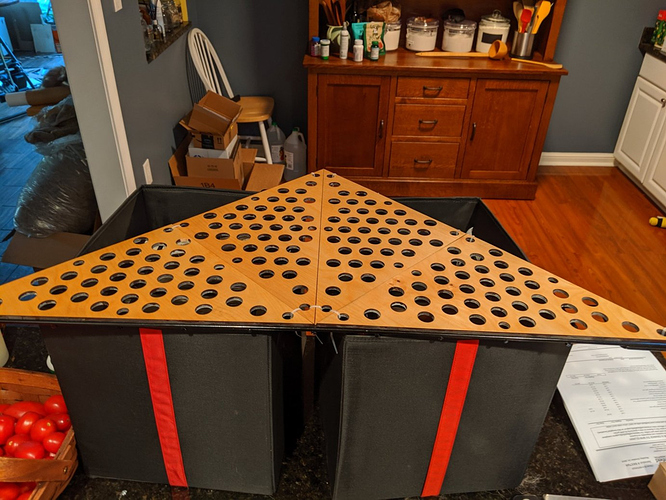 Made an industrial sized cat scratcher. I did not make the actual scratcher surface—it’s only $6 from Chewy’s for a set of two flat ones. I made the wedge shaped platform and hot glued the scratchers to it. It’s been a huge hit! Maybe they will finally leave the upholstered chairs alone. 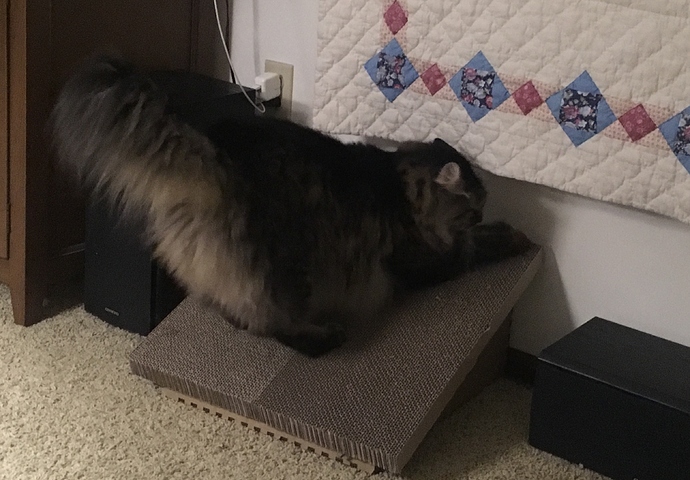 The wedge is made of cardboard, and I put a brick in there for weight before I sealed it up.

i like the build. I’m doubtful the kitties will leave your chairs alone. I put several squares of carpet on the walls, but think mine need some of these too.

It just lets them practice for the main event: your chairs.

I was thinking that would probably be the case, but in fact they seem to like the new scratcher more. I think it’s the size and the angle. Cats are so picky.