So I was planning on putting the GF on a smart outlet that I can control remotely. Any issues with this kind of power solution? I’d simply power on the outlet and the GF should come to life enabling the time preview and other features. Then I could turn it off when done. Anyone else do this? I assume there wouldn’t be any issues with power control in this manner since it ‘should’ be the same as toggling the switch next to the IEC power input. This is the type of smart switch I’ve ordered. https://www.amazon.com/gp/product/B01NBI0A6R It will get here in a few days, just wanted to see if anyone else has done anything similar.

Why would I want to do this? Well, I do some design and layout during lunch. Problem is that the GFUI doesn’t show print time estimates unless the machine is online. I used to simply generate the CAM toolpath for my other laser machine and get the estimate from there, but no options for similar in the GFUI. I have some fairly large/intricate designs I used to cut on my K40 that I’m importing to the GF. I want to get an idea for how much time I need to allocate but right now I can’t do that before I sit down in front of the machine at night. And if it ends up being a 2 hour cut, I don’t want to start that at 11pm.

I believe @karaelena has had a glowforge connected so that he could command Alexa to turn it on.

It would also be great if down the road the software could give time estimates without the machine needing to be on.

How long should I leave the Glowforge on? Everything Else

Same SOP. I fired it up at the beginning of the day and shut it down at the end. Via ‘Alexa, Turn on the Glowforge’ & ‘Alexa, Turn off the Glowforge’. Start to cut is about 2~5 mins. Which is about the time it takes for either me or my wife to sit down and fire up the app of choice. I would leave it running if there was a time out/idle for the lid LEDs ( i.e. 15~20 mins with a WOL like function via the UI). At night the unit completely illuminates the office and the hallway and shines in unde…

How Much Juice is that Laser Using? Everything Else

This is what I use on the house now : On the power usage test I did I used this : (Well, its not EXACTLY this, but uses the same chipset) Now the HA system I use : Any two of the devices come up less then that device and you’d get a heap of functionality. Another other way would be a RPi with a Z Wave ‘HAT’ then poll them that way. An example use case is me and the wife went on vacation to CA last year. The mother in law stayed home. Both me and her got a push notification @ 3AM EST …

Home automation and Glowforge Everything Else

Impromptu demo of what I have setup. Here’s an example of the UI. [image] (Note: In my config. I have Alexa & Google Home only able to lock the doors and report the status (if the door is opened and unlocked or closed and unlocked) but not unlock. Last thing I need is some one shouting outside the house ‘ALEXA OPEN THE FRONT/DECK/GARAGE DOOR’ Heh.)

I think you can load a file and have it processed without having the machine on. The UI will then give the op time.

You can load the file and put in all your setting, but you can’t prepare the print until the Glowforge is on. I believe this is because it has to scan the material.

I have mine on a switch that I can turn on and off. It does not seem to affect the GF in any way.

Thanks for all the replies. I think that the this will be a very handy way to get time estimates until this feature is added to the GFUI. I’d even be fine with a rough estimate on time. is it less than a minute? 5-10 minutes, 15-30 minutes, etc.

I would think taking a few minutes to write a little script or Excel spreadsheet would be even faster than waiting for processing and time estimates, so long as you’re looking for a ballpark and not to the second accuracy.

Just need the inches of cut/score (I know it’s available in Illustrator).

And/or area of engrave with desired LPI.

Use the spreadsheet they made available to convert speed settings.

Would love to dip into home automation. I’d give control to someone else who would be able to force me to go to bed at night at a decent hour through some type of routine and maybe wake me up just a little bit earlier in the morning. And to control my espresso machine remotely. And of course, be able to turn my Glowforge on without walking downstairs. I guess it’s pretty simple.

I think that the this will be a very handy way to get time estimates until this feature is added to the GFUI.

There are several basic things in the GFUI I’d like to see changed and this would be good. It sounds like you do some complicated stuff with one design different from another. For me, I’ve found that I have a pretty good idea of the time a design will take. It helps if you’re mainly rearranging the same basic patterns of tasks.

My internet was down for a few days. (It seems a garbage truck took out my fiber line.) I have more than 50 smart lights that were rather inconvenient to deal with during that time.

You have to be slightly careful with the “smart plug” you get. I probably have 5 dozen or so plugs / switches / etc.

Some do a “soft” turn on (think a dimmer turning a light on) even though they are labeled as just on / off switches. As you can imagine, this is wicked hard on a power supply.

I really like the aeon labs z-wave plug in modules. Not only do you get remote on / off. They even track power consumption (both instantaneous and over time)

It looks like they don’t have any wall receptacles or switches. Or am I missing something?

I’d give control to someone else who would be able to force me to go to bed at night at a decent hour through some type of routine and maybe wake me up just a little bit earlier in the morning.

Got mine voice controlled via smart outlet and amazon echo. No issues, and hilarious fun to tell the house to turn on the glowforge.

These are the ones I have:

They have been discontinued, unfortunately.

I have migrated to these now: 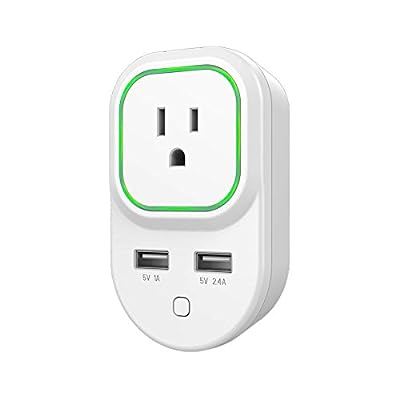 The USB ports work great and are a fun add in. Also, the green ring around the module goes ‘red’ when it is live / active.

It also does the power reporting and is save up to 15A of current.

I like to use the inwall designs when I can. This is one I’ve used.

The only issue I have with it is a very bright blue LED that stays on all the time. Why do companies feel obligated to put useless LEDs on everything? It doesn’t change state with the outlet. It is just blue. I guess it lets you know if the is a power outage.

I do like the Zooz you posted. I’ll have to give it a try for non-permanent uses. What hub are you using? It looks like the Wink hubs only support the on/off functionality.