I am one of the rare situations

Maybe not a rare situation. Probably are more cases but the resolutions aren’t documented on the forum at all or with a closed topic taken to email, we don’t know what happened. Again, I appreciate the reasonable conversation here. This is especially relevant since so many devices become closed systems that the user can’t repair at all.

The tube warranty bit is a little unclear though…

The tube doesn’t have an explicit warranty outside of the normal warranty period. All replacement parts have a warranty of 3-months per the warranty guidelines (https://glowforge.com/warranty)

Glowforge warrants Proofgrade materials and spare parts against defects in materials and workmanship for a period of 3 months when used as instructed in conjunction with a Glowforge product.

The logs do contain some information, but it’s not something that is going to pinpoint the problem in every single case. Much like OBD-II codes on your vehicle (which contain even more data), they aren’t going to necessarily say, this is exactly what’s wrong so an exact estimate can be given to fix it. Using that example, it could be anything from the actual sensor that’s recording data, to anywhere upstream before the next data point is being recorded.

Just to throw an example out, it could be a coolant flow issue: it could be the pump dead, it could be a leak that results in no coolant being able to be pumped throwing the code, the leak could lead to additional damages that sensor data isn’t available for. The sensor itself could have died, meaning just the sensor needed to be replaced and not the pump. Or, it could be a problem with the control board where the sensor ties into it.

Each scenario presents a different repair approach; it would be really tough to sit there and ballpark a repair cost when you just don’t know.

I don’t know Glowforge’s process for testing… but if they have developed what are essentially service manuals (which I’m guessing they have to some degree for the techs), it’s going to be a series of diagnostics to pinpoint the issue.

This is an essential piece of wisdom. Well worth the read and subsequent reflection. Kudos.

All good. Not upset with you actually, just that what you were saying totally makes sense and resonates!!!

Openglow looks awesome. I hadn’t heard of it, so thanks for the heads up. Definitely something I’ll follow.

Open source certainly can be jank, but it can also be brilliant, bringing out the best of a diverse group of interested and technically oriented folks… I was about to go on and on, but I think it best to stay on topic. If you’re interested in some wonderfully brilliant open source projects, message me.

And some is obtainable right now if you know how to pull your logs. It’s documented on the forum

Thanks for this too. Great pointers all around.
Much appreciated!

Glad theres something of value being generated. As I’ve said elsewhere, I intend to document the process fully.

At the very end of THIS thread, @Rita says the tube is “rated by the manufacturer for 2 years”… Its also mentioned in the FAQ. Its unclear if any accommodations are made for tubes that have issues before this 2 year rating. Why even talk about the 2 year rating if nothing is going to be done for them outside of the standard Glowforge warranty???

And I hear you on the whole testing thing, and the repair code situation is a decent metaphor. It would be nice though, if they could be more open and transparent about the information they DO have.

It would be nice though, if they could be more open and transparent about the information they DO have.

As far as the tube, you may be able to get clarification directly from Glowforge, but I’m pretty confident that the tube warranty falls in the machine warranty - and then it will be 3 months on the replacement tube (spare part warranty).

As far as the rated for, I figure that’s kind of an expectancy or an average but not a guarantee. Just like some lightbulbs, tires, cars, etc.

Hey Hunt, sorry for the late reply, I just got back from a half month tour and came home to a Glowforge ready to pick up from FedEx, sadly again, no communication about the process of getting repaired or notice it was going to be shipped, not the biggest ordeal, but still less than desirable. Anyways, upon setting it back up just 30 minutes ago, I see bubbles in the tube, when turning on, a stream of water shot through the tube going from the left to the right. I don’t remember this being the case last time, is this something I just missed, or are they water cooled now? If so, are we just paying for upgrades of prototype laser tubes that they realized should’ve been recalled and are being replaced under the guise of “needs a repair”? I dunno, but I’m about to message support to see if this is normal. 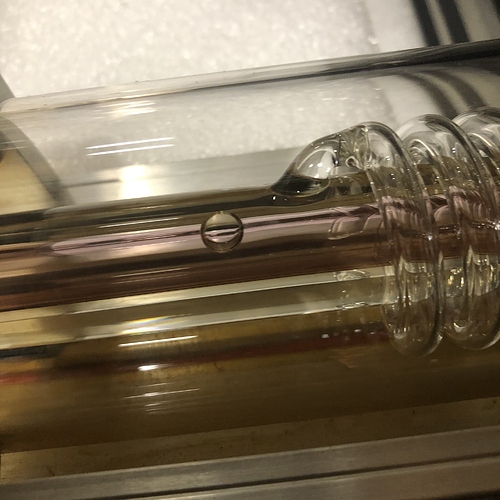 Generally that is normal with a new tube. You will see the coolant filling it in as the bubbles work through the tube.

Once it cycles the bubbles out it should be good to go, no more bubbles. It should only take a minute.

If you’re still concerned by all means wait to hear from support but this is pretty typical from what I can tell.

Thank ya! Yeah I got ahold of support because I thought it may be a water cooling thing, only thing is I believe that process had already been done before I got mine initially, or I just didn’t remember it.

Mine does that every time I pack/unpack it. It’s normal.

only thing is I believe that process had already been done before I got mine initially, or I just didn’t remember it.

A lot of that depends on how the unit was oriented during shipping. The reservoir is in the left front so if the box is shipped tube high (on its front or left side) it can drain some into the tank and vice versa.

Yeah, they’re supposed to keep it flat on the bottom but based on how these things are showing up at people’s doors “this end up” is not even a suggestion apparently.

Haha yeah, that’s kinda what I figured may’ve been the case, anyways I fired it up last night and everything seems to be fine, hoping I’m not getting it fixed five more months from now!

Glad you’re up and running again.
And I see the issue of the water/bubbles in the tube has been addressed (I remember the same thing happening the first time I fired mine up, back then it was just a marvel of the machine!)
May your machine run smoothly and without issue!

Hey folks,
Just an update to the thread here. After weeks of hemming and hawwing I’ve finally bit the bullet and paid the $200 shipping invoice.

I will be provided with an estimate of repair costs BEFORE the work is completed, but it has been confirmed that there will be no technical details of what the nature of the needed repair is or why. It’ll just be a bill I can choose to pay or not. I am (hopefully) anticipating the standard laser tube replacement and not much more.

I’ll give an update as the process moves forward.
Thanks for the support peeps.

It’ll just be a bill I can choose to pay or not.

That’s pretty awful. Did they say why they wouldn’t tell you what they were going to fix?

There is no communication going between the repair facility and the billing/customer service department. Two employees that I know of have mentioned they would mention to the team that people would like these details. Its publicly documented HERE (final comment from Rita - this is the same as the first link in my original post up top).

And Ryan, the customer service rep who I’ve had the longest exchange with said the same. Though when I pressed for what that actually means, his reply was :

Unfortunately, I cannot provide an estimate on if or when we will have detailed repair breakdowns available. If it is something we start doing, we would likely make an announcement or update our customers who go through the out of warranty repair process.

We can take it in good faith that these messages are being relayed internally. But without any sort of public roadmap or accountability or followup process, they just feel like empty comments meant to ameliorate customer frustration.

I am so sorry you are going through this! I have been so frustrated and disappointed by support and the company policy that I keep not knowing about until after there is a problem. My machine has gone down 3 times and I’ve had a replacement part (permanent scanning issue), then I had the lid open issue and then my machine physically broke when the glass detached from the front and the front door was left dangling.

I got a refurbished unit up and running today and found your post when I was concerned by the bubbles and rushing water noise I didn’t have with my original unit.

My original warranty ends in 2 weeks and they offer no extension so I am left shaking in my boots. Even shady cell phone companies offer a warranty on refurbished replacements!

I can not even express my level of disappointment with Glowforge! I think when anything fails multiple times there should be an actual apology and they should stand by their product going forward. I never expected there to be no option to buy an extended warranty and I am shocked that there isn’t so much as a 30 day warranty on a replacement unit. I have haven’t even made back the cost of my machine yet and I am left just hoping it doesn’t break again!

Considering how misleading the promotional videos were a year ago though I shouldn’t be surprised at all.

I wish I had some information that was helpful but I think that so few people having this information is the problem! You are not being dramatic. This is not the way customers having very costly machines with very costly repairs should be treated.

Thanks for weighing in. I wish you well with your current situation.
Seriously, may your refurbished Glowforge live long without issue!