Repeating the same file without going to the cloud

The passthrough experience is definitely unique. Glowforge has done something here that I don’t think any other manufacturers have done, at least on a system that doesn’t cost as much as a house. Many lasers have a passthrough function, and very few have the capability of automating the experience.

The closest existing experience that I can think of on any other consumer-grade laser is how Lightburn handles it, (Cutting a single project larger your laser (pass-through version) - YouTube) which is basically by using fiducial marks. Back in the day, many of us had access to Snapmarks, which was Glowforges implementation of fiducial marks. I believe they said that they trained their algorithm with the results of that beta test. The Lightburn method is fairly involved since it involves splicing the design in software, adding in the registration marks, and then manual alignment on the project.

Since local computing doesn’t happen on the Glowforge, I’m basically assuming that you meant, if the Glowforge software was local, how/what would the experience be?

It’s tough to say. The general processing itself doesn’t have to be in the cloud. This was a Glowforge decision. And that’s fine - I’ve never had a problem with it. Modern PC’s have more than enough power to do the normal processing of jobs. The Trotec in my shop doesn’t even pre-process jobs – it calculates everything essentially real-time (a 3-4 second buffer). By the normal processing, I mean the basic things: this is the file, this is the speed, power, focus, LPI, etc. I don’t see why the autofocus routine couldn’t be local – the Trotec has sonar autofocus and that is calculated locally.

So - saying that there’s no way to process the passthrough data locally, or at least on the same network, with the current architecture doesn’t really hold water, in my opinion - since this is hypothetical in nature anyways…

Why couldn’t it be the exact same way? One thing is that it would have been more difficult to train the algorithms. I’m not sure if those are constantly updating themselves with each passthrough job. They might be. I figure they had a ton of data from the Snapmarks program to train them initially. But, all in all, if the Glowforge established a local connection to the PC, there’s no reason that it ultimately could not function the exact same way. Right?

I get the benefits of the cloud and how it can help make things easier from a development perspective. OS doesn’t really matter, browser doesn’t matter a ton (though it can sometimes), everyone always has the latest software version, etc. But, since we’re again being hypothetical about it being local, if something really did need a supercomputer to run, you can always have an app that communicates back. This is what Adobe has done with their neural filters.

I’m not sure if those are constantly updating themselves with each passthrough job.

When I first got the GF and used the pass through it was okay. I have been testing with it, it recently managed to nail a pass through “hello world” cut on mislin fabric.

FYI, these photos are going to look like nothing is there on the fabric but if you zoom in you just barely see the cut out that it picked up on. I had it end in the middle of letters and it still picked it back up.

The GF had to do a lot of rechecking but it figured it out. 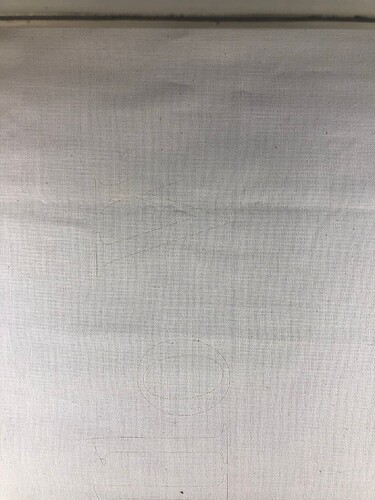 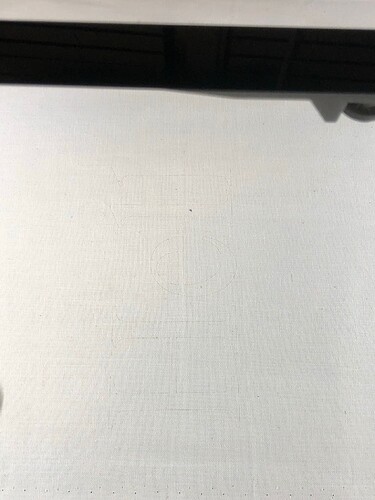 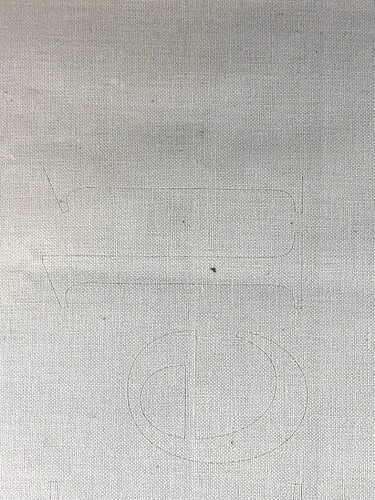 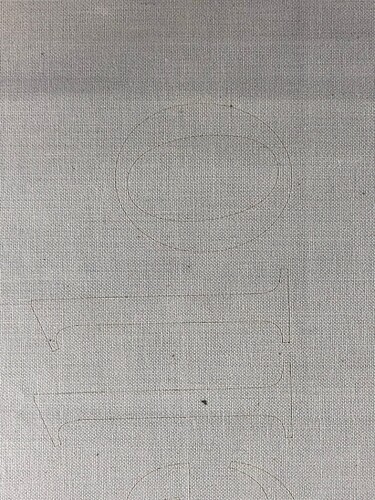 But your post has a lot of good information on things I have been wondering about for a while. It’s certainly cool to hear how their system has developed over time.

It’s certainly cool to hear how their system has developed over time.

In all fairness, Glowforge has really revolutionized the software side of working with a laser. They’ve made it incredibly easy to just get going with it. And I know that’s something other companies have been trying to emulate.

I’ve personally been through a software whirlwind between first the Glowforge, then the Universals, then Trotecs software, and the software they’ve just released which is a browser-based version. It took a lot of effort on my part to go to their browser-based version since it’s just different and having to learn a new program. I see a lot of similarities in the browser-based software between GF and Trotec, and some things that are definitely improvements that I think would make the GF experience better.

What does sell glowforges? Ease of use. Trying to convince nontechnical people to get on board with design tools.

Word of mouth marketing is extremely profitable (as GF knows from the referral program). And I know for a fact that this is one of the many reasons why some people will not only not suggest a GF, but will try to convince people to not buy one. I’ve watched this go down on FB dozens of times.

Right. And “you can reprint things without going to the cloud” isn’t exactly water cooler talk.

Exactly. The “middle market” crafters are opting more and more for pricier machines with faster speeds and more options because they are working in volume, They may not be discussing the technical aspects of cloud processing, but they know the effect on the bottom line.

Engraving speed is the glowforge’s achilles heel. Nothing to do with cloud processing, of course, but the glowforge is dog slow.

I would never consider any serious volume of engraves, it’s very unlikely to be profitable.