My friend is a VP over at Bose, and I wanted to make him a cool project. So I thought a cool Bose related carving would be neat. I originally was going to do it in purpleheart, but it looks a little weird when I contrasted the maple against it. So using the poly mesh of the 2 interacting wave patterns I did the walnut as a raster 3D engrave on the x-carve with a 1/8” Amanda Spektra down cut 2-flute mill, then a 1/8” carbide ball-nose for the finish pass, and ultimately back to the down-cut to make the pocket for the inlay. The letters are cut out of proofgrade maple on the Glowforge. Of course I could have done the inlay solely on the x-carve but that would be slower for trial and error for fitting. In hindsight I should have done the inlay using the solid maple from the Glowforge and then done the 3D carving which would have allowed the maple to carve with the wave pattern, but with proofgrade ply, that would have exposed the MDF-core. I then finished it all with Clarke hand rubbed citrus oil finish and Clarke paste-wax. Without a banana that is 6”x12” 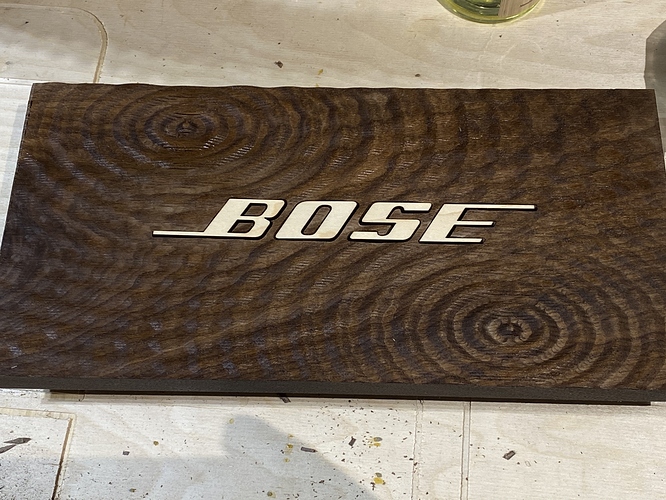 That’s very sharp!
(And I like the contrast of the smooth letters against the engraving.)

, but the CNC does make quick work of it

I love how the wood grain moves with the waves - especially on that top one!

The letters are cut out of proofgrade maple on the Glowforge

I did something similar with water ripples using the Glowforge. I might have used a better choice of wood but yours shows the problems I discovered with CNC. I was wondering if one might rough down with the CNC and do a final cut with the Glowforge so there would not be tool marks, that way you could do the CNC with large fast tools at very much faster, and the final cuts with the laser with far finer and greater detail than the CNC.

The CNC being able to ignore the waves to cut to the inlay level would be a really big plus, I have several pieces of failed deep engraves I would be able to recover if I could do that and not a few that could use ordinary resurfacing,

A gorgeous piece he will be proud to display I am sure.

Love that wave action. He’s going to be chuffed.

That’s nice, but how big is it with a banana?

I’ll show myself out…

So in theory the tool marks should get smoothed out with the ball-nose. One thing you are seeing is the polygons from the plot. The facets are totally visible in the digital preview on screen as well. The Glowforge would have a very low material removal rate. The z-height of the ripples is around 0.2”, plus of course no-scrubbing after to get the char off. For shallow engraving the laser can’t be beat, but for deep cutting, a milling machine takes a way bigger bite. 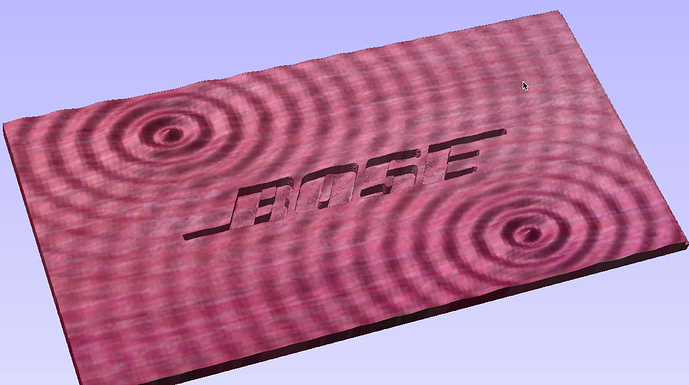 Weirdly our bananas from our local trader Joe’s are dense enough to warp space-time, so the distortion does change the original object’s size!

Very nice plaques. I like the walnut one best too, although the purple heart isn’t bad.

Love the wave pattern, but the contrast of the two woods is just so striking.

That’s very cool! Bose is one of my employer’s customers; it is fun to see all the new ideas they are working on but I can’t talk about.

I think that Purple Heart rocks that design.

I agree. Much better wave effect. Putting the maple Bose inlay in the purpleheart would be over the moon.

No question about that, It is just that I was very
annoyed that there was no size or shape of cutter that did not leave a mark of over or undercut, no right angles, and when you tried to use minimal diameters to catch details those increased cutting times like quadrupling LPI does in lasers.

Clean up of engraving I have found less of a problem than one would think if the settings are carefully discovered and followed. My black cable awaits a more stable health as it is very intimidating in getting it installed without ruining it, so I cannot test the implications but I have discovered a new car polish that supposedly lays out silica, but first tests shows it an active cleaner beyond what I have tried to now, and cleaning foggy headlight covers is a major claim, so not likely to damage acrylics.

Oooo that would be so cool. I wonder if you can find the drivers? They were all just small midrange drivers if I remember correctly.

Well for inside corners, for outside corners not a problem to cut right angles… But since I don’t have to worry about material safety (if I want to machine a giant block of chlorine ice I can do that!) But yeah, you can’t beat the kerf of a laser beam…

But right now where I am machining a huge (28"x28") grave-sign out of pink-rigid-foam for halloween to direct kids to the drain pipe where the candy will be dispensed (ugh) from. that’s a 2" thick piece of stock and the carving is over an inch deep (wouldn’t want to do that on the GF…) But there are other signs I am doing on the GF for halloween which are smaller and 2-color acrylic. 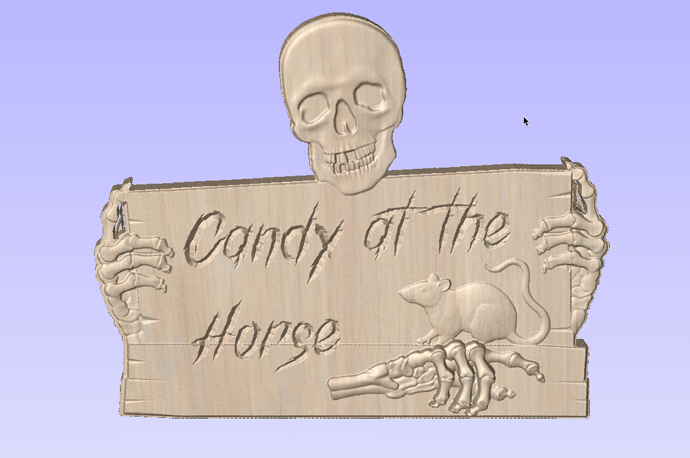 carving is over an inch deep

No question size is a winner for CNC. My first exposure was a table CNC a friend got that could do a 4’x8’ sheet of anything, and he rode that to the top. But he was looking for me to solve all the other speed and detail issues that his customers had no idea of the limitations so I was expected to solve, So I saw a lot of the pointy problems more than most.

Btw if the money is not an issue Artcam is amazing! It has a weird way of looking at things but does terrific!