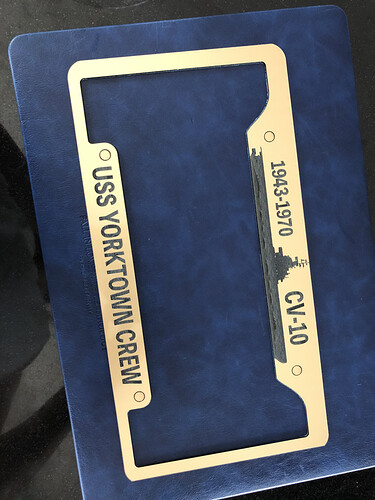 I have never cut on this material. However, you have a great piece of “waste” material from the interior, use it to make a test cut/engrave.

Actually, for this specific example, it lookes like only the small cuts for the holes didn’t take. make sure they are Cut not Engrave or Score. Leave the plastic on this one until you manually drill out the holes, then remove the mask.

On subsequent ones, set the holes (if they are separate from the rest of the design) to cut twice or 3 times. Use a piece of duct tape to lift the holes first on the next one(s), so if the holes aren’t complete, you can just run that part again w/out losing registration.

edit: the Focus (out of focus) I would use to smooth and enhance the engraving, but cutting should focus all your energy where you want the separation. [Unless you need a wide kerf, then cut multiple passes.]

Hey you experts out there, chip in if I’m wrong.

So 1/8" is not .0625 and I don’t know why you would engrave at .005 rather than use the set focus. It is important to remove the plastic as you discovered, and now that you have one unit that didn’t work out, you can do some tests to dial in the proper settings. You previously (on the bag tags) cut at 150/60 so I am wondering why you didn’t repeat your own settings.

Proud ship with a distinguished record. Fitting design for ship’s company, I’m inspired to do one for CVAN-65 Enterprise.
Your crew mates will be pleased. Well done, Carry on.

Use “set focus”. Works every time and takes the guess work out of the equation. Just watch to see that the red dot appears where you need it.

Here are my two color acrylic parameters (custom saved as 2 color engrave, 2 color score and 2 color cut, so they are always just a click away when acrylic is selected as a medium).
As with any other resource, these will be the start zone. If they work, excellent, if not then you have somewhere to tweak from.
You have a large chunk from the middle. Good test slab and can be the same design if you just grab the corner and shrink it to fit the inner waste piece to test the numbers
.

Inventables 2 Color Acrylic Settings Everything Else

Yes and no. The plastic masking comes off all the materials. I use paper masking on leather, wood and plastics. As a rule I try to engrave/score/cut vector designs without masking on the two color. Only once have I got discoloration//char from doing it this way. It was a marble looking two color and for some reason it wanted to flare and flame (suspect something in the materials to make it look like marble). If there is a raster element, they tend to sweep over the entire design and this can…

I was using 1/16?? And I haven’t used set focus. Was running out the door and wanted to do it quick. Lol And I was going to used the same settings I used before but the metallic layer was not going away. Thought it might be thicker? Or maybe because I had the plastic on. Will do another when I have a chance.

I am not a crew member but I manage their office on the ship. If anyone needs help designing one let me know. I found the license plate SVG in the community and changed it up a little to work with the ship. Will make a full front license plate as well.

Thanks so much for you help. Some days I just cannot make it work and it is the simple things I get wrong.

I had never seen the designation CVA(N) before they changed it to CVN. I read about CVA and even CVL but missed seeing CVA(N). Didn’t have anything to do with carrier suitability so easy not to notice, or remember. Only carrier I was ever on out at sea was CVN-68 (Nimitz for 2 weeks).

The Navy dropped the A in '75 I think when she went into dry dock for refit. I was aboard her last cruse before that, WESPAC '74-'75. The designation was C (carrier) V(fixed wing) A(attack) N(nuclear). I think they felt “attack” implied the wrong message.

I’m guessing you were aboard as a factory rep? How did you feel about that experience? Was that during her sea trials? I’m also guessing you didn’t have to experience the mess decks but took your meals in the wardrooms with the officers.
We had a couple of reps aboard, I know one of them was from Grumman. These guys were in their upper 60’s, and I thought that would be a great experience. No duty/watches and got to visit exotic ports of call.

These are the base settings I use on my Pro for unmasked JDS, IPI, and Rowmark 1/16th laserable 2-color engraver’s plastic:

In any case, using set focus is actually much faster than entering material thickness manually. Give it a whirl sometime when you have time.

I’m guessing you were aboard as a factory rep?

No. Was a long hair civil servant at the time. My social deficiencies are offset by abilities in pattern recognition, math, computers etc. I had written software in our computer lab to improve capabilities in the ship’s CIC. They Navy flew me out to the Nimitz while operating at sea (Mediterranean) to install and test the upgrade. (Decades ago for computers that no longer exist.)

Fun story. While I was there the ship intercom announced “Richard Pegg, Richard Pegg, report to the Commander’s ready room, immediately!” As a long hair civilian I assumed I was in trouble. A seaman escorted me through the maze of bulkheads to a door with an armed Marine stationed outside. I went inside and was immediately greeted by Admiral Kelso the Commander of the entire 6th Fleet. He asked me to sit down and whether I wanted a cup of coffee. Now, I hate coffee, can’t stand the taste or smell of it. I responded " yes sir", and we had a pleasant chat. It turns out that somehow the Admiral found out that I figured how to quadruple the memory capacity of a popular PC of the time and was selling the upgrade in an obscure PC publication. He owned one of those computers at home and wanted to buy an upgrade from me. It involved rewriting some code, a couple new chips and adding a few jumper wires. Pleasant guy. He became Chief of Naval Operation a couple years later. I eventually cut my hair.

Yeah, ate with the Admiral and officers and slept in the aircrew officer’s quarters though those were directly below the operating catapult.

the aircrew officer’s quarters though those were directly below the operating catapult.

Hehe, great story, thanks.
My compartment was at the stern, and there was a circular patch about 8 feet wide welded into the overhead, a reflection of ordinance hung on aircraft detonating in the Enterprise fire. Anyway, I’m well acquainted with the sounds and vibrations of operations. The arresting gear was particularly loud, but when the catapult piston hit the water break, it sent a shudder through the entire ship. Night ops offered you no sleep!

Since you are stargazing brethren I have a story for you.
Middle of the Indian Ocean, mid watch (midnight to 4AM), flight deck fire watch, darken ship conditions, no Moon.
After you eyes adjusted, you could just make out the deck edge. Now, I’ve seen dark skies many times across my life - but never like that night. You could see stars “blink” on as they cleared the Eastern horizon, and "off in the West. Every bit as clear horizon to horizon as straight overhead.
I walked in space that night.

There is “Dark Sky”, I would qualify that nigh as “Black Sky”. The way the ancients saw it, with nothing to compare to, you have no idea until you’ve seen it. I had a sore neck the next day.

If you’re looking for something to do this summer and interested in a trip to the northeast, Starfane is back on this year.

Starfane - I will have to explore that, thanks!

Google is not helping.

If course Google’s no help. It did the smart replace for Stellafane

comes from the Latin words stella meaning star , and fane meaning shrine which together means “Shrine to the Stars”

Sounds like a good time! The possibility of meeting you adds to the incentive. Thanks for the heads-up.

I feel like I’m eaves dropping - love hearing your stories. You all will have to come see the Yorktown sometime. She was a CV10 CVA10 and CVS10. Our crew come back every year for their reunion in October. Do you all have an association for the crew on your ships? One of our crew was a night fighter pilot WWII and talked about landing on those black nights. Another just turned 101 and will be attending the reunion. Amazing men. Thank you all so much for your service.

Saw the Starfane post and was about to ask if you meant Stellafane. Went three times but not since before 2007. Had a bunch of places across the country that I needed to go for work. Used to schedule work trips and delay my return for events like Stellafane, the Riverside Telescope Makers Conference, and Star Parties in FL, TX, PA and a few other states.

Kind of feel sorry for the very off topic posting. But not enough to stop.