Settings for Engraving on Slate 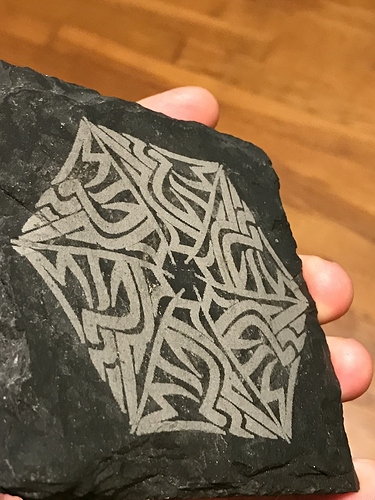 Agreed. I was able to get these done before having to send Glowfy/Flint back: 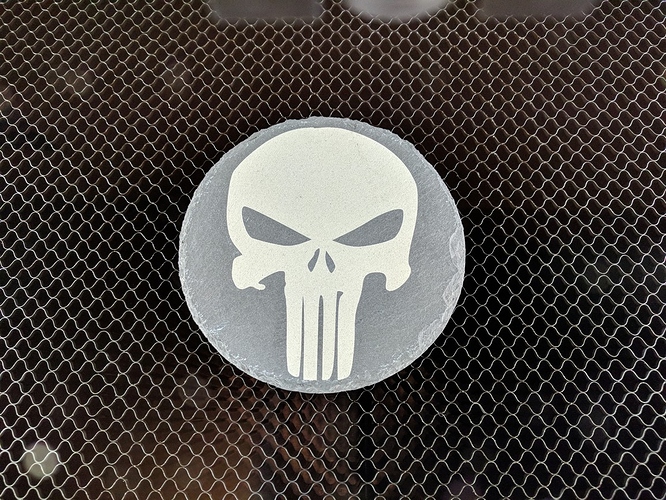 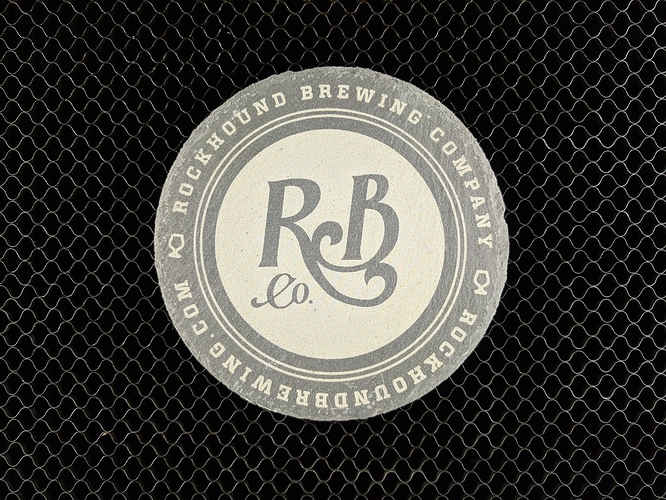 These are awesome! Does the GF cut the slate, or was the slate already cut to the circle?

Does the GF cut the slate, or was the slate already cut to the circle?

The coasters came already knapped to a circle. The laser discolors the slate nicely, but there’s no appreciable cutting happening.

Did any of you use masking while engraving? I’m getting ready to try an engrave on some slate coasters.

Totally not needed on slate. (But don’t look at it while it’s firing.)

On slate prep: Thanks to @kittski, I wiped the board down with mineral oil first – it doesn’t require much oil, go light, and use the most lint-free rag you can wrangle. If you’re desperate, paper towels will work, but paper bits get stuck all over the place. Then, expanding on her idea, I let the oil soak in for about 5 minutes, then washed the board thoroughly with dish soap and water. This takes most of the oily sheen off the surface – when it dries, it’s still dark but not slick or shiny. Since this is going to be an art piece more than a used object, I thought the oily surface would hold onto dust and grime, so this is my attempt to forestall that. This is all undiscovered country, so don’t blame me if this doesn’t work

On file prep: there is very little play in greyscale here. Slate engraves to white almost immediately, so subtle shading is almost impossible. Crank your contrast way up, you really want almost pure black and white if you have any fine details.

My first step was to sharpen the image, then desaturated to greyscale, then change the curve to make it almost pure black and white (my curve looked more like a cliff). Scale and engrave.

Aligning the board wasn’t difficult but also wasnt simple. It’s too big to completely enclose in a frame jg, so I had to improvise. First I gently applied masking tape to the board along the edge, then measured and marked the board centerline very carefully.

I aligned my engrave with a bounding box, and put a score line on the edge of that box. delete the top, right and bottom of the bounding box, and you’re left with a “t” of sorts denoting the edge and center of the finished piece. Scale the vertical side down without moving its center or relation to the engrave, and you’re left with a way to cut some scrap cardboard and score a centerline.

Now I’ll move quickly:
Measure your cardboard height (thickness).
Measure your slate height (don’t forget the height of the feet attached to the slate, use your calipers on the feet to top surface)
Upload to UI.
Align and/or scale the picture so the engraves and cuts fit in the usable area. After this point, you will not ever move the image – this is important.
Set material height for cardboard.
Set horizontal to score.
set vertical to cut.
Ignore engrave.
Cut/score.
Remove waste cardboard, but do not move the scored fresh edge piece. Liberal use of magnets to hold your cardboard is encouraged.
Align the slate carefully against the cardboard, matching the center line on the tape with the center line on the newly marked half-jig. Again, don’t bump the jig, if it moves, you’re out of luck on alignment.
Ignore the cut/score.
Turn on your engrave.
Set material height for slate.
Double check your alignment.
Double check all your UI settings.
Have a slight freakout since you have no other materials or time to correct if you screw this up and the girlfriend’s parents will not have an awesome cheese board art piece. (optional)
Start the engrave.

if you look carefully in the picture below (where it’s in progress in the glowforge), you can see the cardboard and its score line to the left of the piece. (With a bonus “you screwed this up” line on the jig that was from a previous attempt) 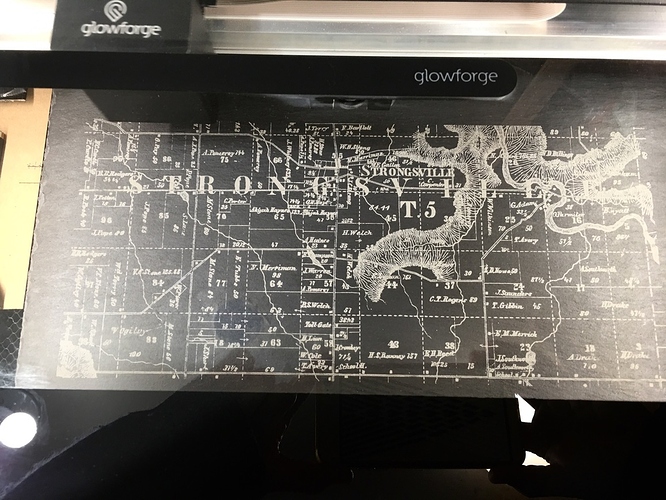 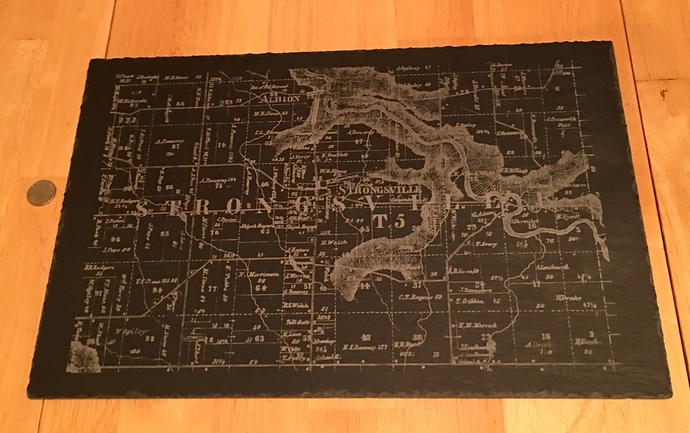 This is so awesome. Thanks for doing all the hard work for me!

I’ll “pile on” - this info was clear and worked perfectly. The set of coasters (https://www.amazon.com/gp/product/B01G6MHU9Y/ref=oh_aui_detailpage_o07_s00?ie=UTF8&psc=1) was a great deal, and engraved very nicely, just in time for the holidays.

I just found out that rescuing slate from a botched engrave is possible. I started something and realized I screwed up a setting, so thought maybe the coaster was ruined. 400 grit sandpaper and 3 minutes later, I was able to completely remove the screwed up portion, apply a tiny amount of mineral oil to darken the area and remove the stone dust, and start again. It looks perfect, actually.

25 Likes
Video Tutorial: How to Design and Make a Slate Coaster with Your Glowforge
Anyone know whats going on here?
niacobelli December 21, 2017, 4:47pm #18

To etch these circular slate coasters from Amazon. I think they came out beautifully. 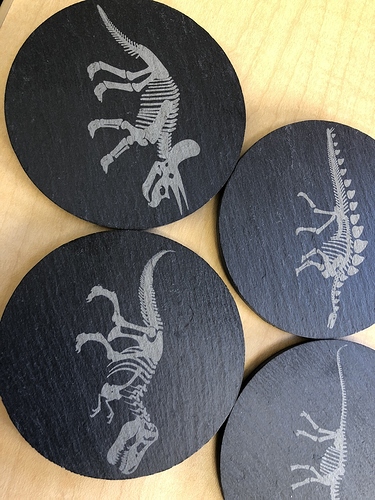 Nice contrast, did you treat them?

I actually did not treat them. They came pretty shiny out of the box.

do you mind sharing the amazon link for those? I like them and that turned out well.

Hmm pre shiny coasters… do you have a product link for them? Might be handy sometime.