Sketching out a DIY filter

Granted that I live in the great beyond and have no neighbors. But standing more than about a dozen feet from the exhaust I can’t even smell the acrylic. But your wind patterns and barometric pressure may vary.

The houses in my subdivision are sadly a bit close. I think the house to the south of me is about 20 feet away.

My wife (a baker) and I are astounded that our country is one of maybe two countries that are still not using the metric system. It’s just crazy. When we were in grade school, we were all told to be ready for the transition. Hmmmm.

Congress got involved and over ruled Jimmy Carter on the metric system. They do a lot of stupid things that have no basis in improving things but to get an extra dollar in campaign contributions from the special interests.

My dad owned an auto garage and refused to work on foreign cars or buy metric tools. Thought it was a passing fad and that Americans would come to their senses. Went out of business in 1978. Loved the man to death, but he didn’t like change much.

BTW: you do understand that I’m a supporter of Metric? Was saying Congress was stupid for voiding the change. Noticed it may not have been clear.

I understood. Metric is too important to not keep trying to get it done. I wonder of the Tool lobby is behind this.

My wife converts all measures to metric to scale her bread components. I find it annoying to have two sets of tools and having to do fractions to figure out what the next larger size is. 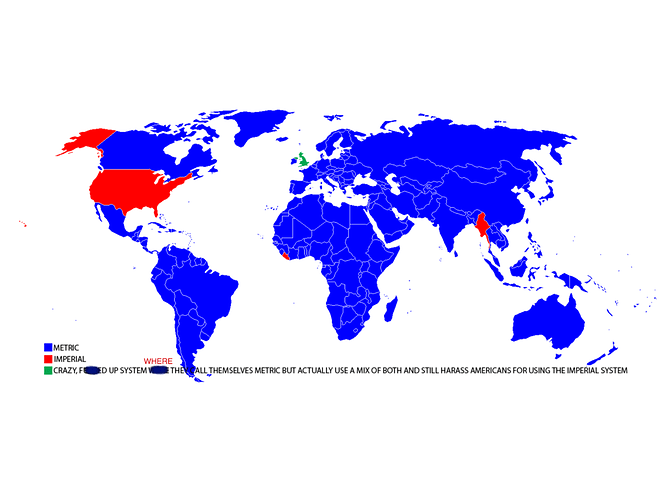 Funny how they label the UK.

Actually, I was going to say, funny how they label Canada as well. Everything governmental is labeled in metric, but almost everyone uses some imperial for person-to-person exchanges.

I blame cooking recipes for propagating cups / pounds / ounces, and wood / tools for propagating fractional inches. I don’t work on vehicles, but I strongly suspect I’d live without imperial there, lacking the experience.

My wife studied at The French Pastry School in Chicago and she found metric critical to what she does. Much to my shock, bread baking is a very complex thing to do correctly and in a repeatable way. She uses a digital scale to weigh it all out. That made me wonder why I’m still having to guess how many ounces in a pint, quart, gallon… LOL

I believe metric takes advantage that humans are naturally averse to decimal digits. Conversion and numeric manipulation leads to fear. Fear leads to doubt. It is the path to the Dark Side.

When I see decimal numbers on measurements, my mind triggers: “Woah, we’re getting into lower single-digit numbers, I really need to pay attention here.”

bread baking is a very complex thing to do correctly

, to all metric was making charts for bread baking after reading Raymond Calvel’s Le Goût du Pain. I had many, many bread books and all were pretty much Imperial. After getting the French book and thinking through it I made a spreadsheet of the different proportions as I scaled up and down the basic French bread recipe. It is so much easier to use grams in weighing everything out. Then I made the chart for the pizza dough from Peter Reinhart to scale by bakers percentages. So much easier.

I gave away all my bread books except Calvel’s to my nephew and just stuck with the charts I had made. Glad I got a one of Reinhart’s books back last year in the gift exchange.

Much to my shock, bread baking is a very complex thing

Yeah i do a bit of Molecular Gastronomy, to spice up Dinner Parties and the like.
For my ingredients i have to use a Jeweler’s Scale to get the weights absolutely perfect… the idea of attempting to do that in Imperial scale would do my head in.

I believe metric takes advantage that humans are naturally averse to decimal digits.

But this is what astounds me about Imperial… people are somehow comfortable with 1/16th of an inch but feel challenged by using the Base 10 system that is the basis of our counting systems (Babylonian Base 60 counters need not respond).

Ah…”The Taste of Bread”. Yes, my wife has that and Reinhart’s “The Bread Bakers Apprentice” among many other titles. I remember when she was learning how to scale bread recipes…UGH. She does pastry, cakes and bread. I’m not sure which she will land on full time. I lured her to the Midwest from Sonoma and the wine industry, so she’s changing specialties.

TBBA was my inspiration for building my own pizza oven. Which led me down a rabbit hole of design & materials science

But there’s no better way to make pizza or bread.

Given a starting size, such as an inch, it is trivial to create the power of 2 fractions simply by halving. Calculations and certain conversions are easier in metric, simply because we use base 10 for our numerical system, but that is likely because we generally have 10 fingers.

Recall that many of the Imperial measures predate a decimal positional mathematical system, or even one with a concept of zero.

It scales, it is based off of a logical mathematical progression.

Now, don’t get me wrong… i am NOT demanding that you burn your sliderules and convert to the glorious master-race of metric users. Whatever floats your boat!
In this house we use the Common Giant Frogfish (CGF) as our base measurement and were looking at a surfboard which we estimated was 9.5 CFG long.
Then we drove home 4.75km (= 4750m = 475 000cm) or in Imperial 2.95miles (= 5192 yards = 186 912 inches) - i have no idea how many CGF this is and would not want to even guess!

Use what is easiest for you but the logic of the metric system cannot be denied.

All of those are easy with no predivided measurement device.

Constructing 1/10th is not as quick or easy.

Base 10 is an accident of our physiology.

In binary, fractions like half, quarter, etc. are 0.1, 0.01, 0.001, etc. indeed, one tenth is not directly representable in any finite number of bits, it is a repeating pattern much like a third is in decimal.

Even the metric world uses the 24 hour day.

Trying to look at the decimal expansions of simple fractions and saying they are not easy to work with is missing the point. When asking why something is comfortable, it helps to look at how things were formed, why they were formed.

I am not suggesting Imperial is better. But for some classes of operations, measuring in powers of 2 can be easier.

See that i find interesting.
I think BECAUSE of the reliance on the Imperial system in the US you guys are much more comfortable with fractions. Where-as for us fractions are something kids are taught in school until they are old enough to learn decimals

I do not know anyone here in Oz who would give a measurement as “a fifth of a centimetre” or a “sixteenth of a centimetre” - even a half is something we would only use in light conversation eg: “yeah the guy from the council said it was less than a metre and a half… but when i measured it up it was 1550mm” was a conversation a concrete layer and I recently had.

Builders in the US seem to base their measurements off of Inches and divide down
Builders in Australia (and the parts of Europe i lived) work off of the millimeter as a base and extrapolate up where necessary.
You might say ‘take half a centimeter off’ but only when you don’t care about the accuracy of your work. in most cases it will be ‘take off 3mm’

This is why i think you guys feel comfortable using fractions, which we see as inherently inaccurate

And that might be fine for an agrarian society (which was the basis of the Imperial system)
But these days we have calipers, rulers, tape measures of incredible accuracy - when was the last time you folded up a piece of paper an inch long to get a 16th? If you did how did you adjust for the inherent error in the width of the paper?

If i was to require 250ml of Milk why would i take a litre and divide down twice to get a Quarter when i can just measure it out?

Of course you can do that too with inches, quarts etc… you have accurate enough measures; you no longer need to line up 3x barleycorn to get an inch. Since you have access to accuracy why not use it in a scaling system?

The literacy most US-citizens (and indeed Burmese, though i have not met any Liberians) have with the decimal system far surpasses almost all Australians in 1966 (which is when we converted). As you point out though… it is a system you are comfortable with, and all power to you.
When Decimal was introduced in Australia tradies said it was going to lead to buildings falling down, chaos in the streets (dogs and cats living in sin)… the kids of those tradies no longer even know what an inch or a foot is!

I can still use inches, feet and quarts (and Japanese 寸 sun and 尺 shaku) if i have to, but as others have said, i just transpose them across to decimal so i have a more accurate system to work with.