So... How closely do you pay attention during cuts?

Cardboard or other highly inflammable items, like a Hawk, other cuts, same room, long engraving, check on from time to time.
But as others have said, everyone has their own risk tolerance.

I have been doing a lot of acrylic and once I see it started I don’t pay a bunch of attention. It consistently doesn’t make a flame. Wood and paper gets a lot more attention.

It depends on my experience. Proofgrade materials and acrylic don’t get babysat much, though I stay in the same room most of the time and check every 5-10 minutes. Anything I haven’t used before gets watched like a hawk. After I have used a material 4-5 times I relax a little, but the amount is proportional to my perceived fire risk. If I suspect a material has a higher fire risk, I will stay with it. If the risk is low, I will not pay as close attention.

One area of risk on materials other than cardboard or paper, is if your masking is loose. I have had it on Baltic Birch (not any Proofgrade material, that masking sticks good) where it wasn’t burnished down tight, and the masking loosened up and flopped up near the head. It didn’t catch fire but was definitely a risk.

I keep pretty near - especially for paper. I had my first fire yesterday (cardstock) and if I had been across the room when it started, my machine could have suffered.

I sometimes leave the room to change laundry but bring the laundry into the room to fold. I do not leave for more than a couple of minutes. I have not done anything but PG material and no paper or cardboard yet.

A combination of material, design and task time.

Paper and cardboard I’m not going to leave. My masking is lower tack than the proofgrade masking and even though I use a squeegee to apply it, on rare occasion I’ve seen it try to come up from the air assist. I’m not worried about starting a fire using wood or plywood, but once the cross-arm jumped the rails and the laser head was stuck lasering in the same place. That could start a fire maybe. That said, it’s possible I didn’t completely watch a certain three hour task.

Oddly, the only thing I’ve had catch on fire was clear acrylic during a cut. I’m always present during cut operations now.

if I leave the room for any length of time, I’ll point the baby monitor at it and take along the little viewer.

That is a great idea, I don’t have or need the baby monitor but I do have some cameras with wifi. better yet ( @dan might you include such monitoring with emergency cutoff as a part of the GFUI so others could pay it attention as well? Or can you already do that?)

On edit: I have now spent the afternoon trying to get the cameras to feed to any tablet or phone, or even the main computer without success. Any good ideas are welcome

Yeah, the only real flames I’ve seen were on 1/4" acrylic, and the air assist kept them horizontal. I was ready with a wet rag just in case. 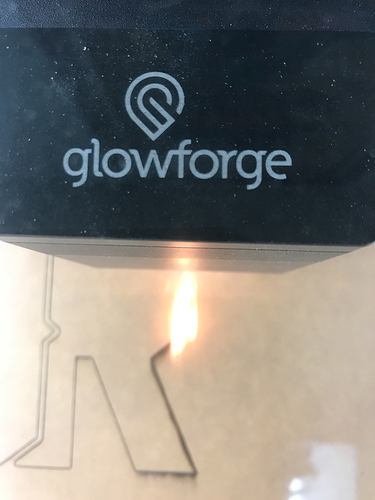 I’ve mostly been doing engraving on material and marble. Marble won’t burn, so I’ve never watched that like a hawk. Although I still get a thrill out of seeing the pattern emerge from the masking. I watched the first couple of material engraving tests. But after that, I’m fairly confident there won’t be a problem. Cutting is a different story. I’ve only cut acrylic, cardstock, and the founders ruler. Those got a constant eye.

I keep a web camera on it so I can check without having to get up and look. Watch cardboard carefully. You have to take care. Sometimes your settings might be incorrectly entered and you might burn what you don’t intend to. You’ll get familiar with how certain designs, materials and settings go together and what provokes a burn. Be careful of odd bits and pieces that might fly out and get in the beam path and catch fire.

Can someone push my glowforge button? There's a robot for that Beyond the Manual

I’ve had this saved in my amazon wishlist for years. Just found it again and thought it would make a nice addition to the Glowforge. I see a lot of comments about pushing the button and thought this might be useful for some people. I suppose you can get it to turn on the glowforge too. It works with an app. So you can set a specific time to activate. or use IFTTT commands and Alexa to do things such as activate the button when I pull up into my driveway. I personally don’t have this item but I m…

I made a thread and got a lot of heat for not watching my machine the entire time. It sits 15 ft away from me and I check on it periodically when I’m cutting Proofgrade wood. When its engraving I might check on it less.

I think the fear there was more that (not necessarily yourself) but anyone coming along reading it someday might try to start it remotely without being there to supervise it. (Not a good idea for anyone…it’s a power tool.)

how closely people babysit their glowforge while it’s working

Okay… I’ll play. And what the heck… I’ll be completely honest.

With a material/settings combination I’ve used before*, I push the button, go to the other room, and say “Alexa, set a laser timer for {hh:mm}.”
* Excluding cardboard, paper, or other materials I deem a higher flame probability.

If I’m working with some unknown material/settings combination, like a hawk.

My GF is in the garage, and I don’t leave the garage while it’s going, beyond maybe grabbing a drink or something. That was part of the compromise I had to make with the wife to get it. I usually have a ton of other projects to work on while I’m waiting, though, so I don’t mind staying near it.

I’m so glad someone brought this up. Like most, I watch paper products and cuts standing at the Forge, but I’ve run long, light, unmasked engraves with just occasional check ins. I always feel guilty about not standing right on top of it, but there just doesn’t seem to be any danger with the ones I leave.

So is your furnace. And refrigerator. Both of which have caused many fires and deaths (well, not yours specifically

(well, not yours specifically

Well not yet anyway.

I dunno that I would consider a refrigerator to be a power tool. That might be a bit of a stretch.

Remind me to tell you about the time my ice maker caught on fire.