The Cause for Pause

We have read that running a laser at higher temperatures or over driving the tube shortens its life, and that as temperature increases tube power diminishes.

I attempted this engrave before I had figured out the exhaust grill behind the fan was face loaded and preventing the machine from venting properly, and so I was getting pauses in the middle of a job. Cutting is not so much a problem except the wait, however for engraving - particularly for a photo engrave, a pause will ruin the job.
Here is a visual example of tube power ramping down, and recovering after cooling down. 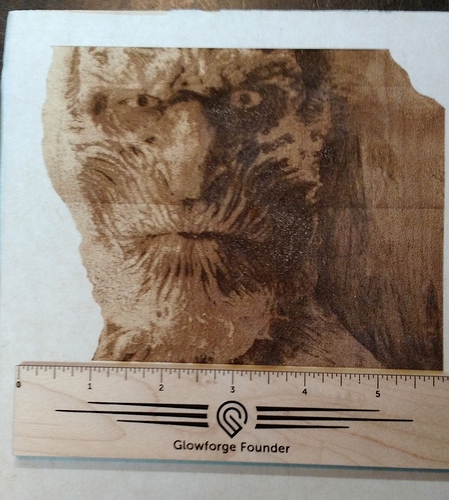 The engrave running from his chin upwards, the pause produced the banding. Notice the shade before the stop is lighter, and darker after it resumed. The power had been diminishing as the temp went up, and after cooling the beam power returned.

I had fun experimenting with additional passes. More material is removed with each pass, more from dark areas and less from lighter ones so you get a sculpting effect. This is 4 passes. 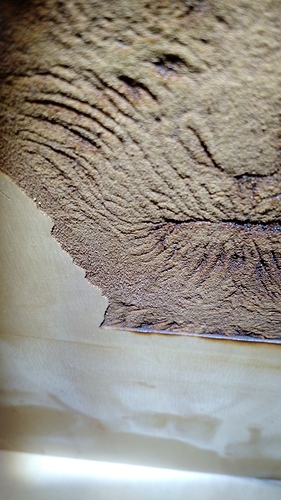 Thing is, the work gets a little darker. The white specs you see in the first picture is a result of me scrubbing with a toothbrush and alcohol (another

).
So the coloration is like a patina, and is somewhat fragile. I have been meaning to try another pass at low power on engraves to clean them instead.
Did I mention how much fun this is for an old dog like me?

This is interesting info! I had wondered what would happen to a job if the tube had to power down. Now I know.

And you are my kind of geek if you’re engraving one of the walkers. I know I should have some lovely name for my soon-to-arrive 'Forge, like Eos (Goddess of the Dawn, precursor to most Western European goddesses, especially Brigid, goddess of the arts), but really, I want to name it Longclaw.

Seeing how each pass pronounces the difference between light and dark in the engrave is cool! If I were skilled with paint, this kind of topography could really produce some great results. Easy to highlight that!

It appears it is only immediately after it starts where it is way darker, then in a few passes warms back up to the standard output. They should have it run somehow to warm back up before it starts cutting again to reduce that initial overpowered section

I was wondering if perhaps that might have been a contributor to the burn on the edges of the black acrylic that had been posted.
The first test I did on black acrylic matched the problem, but subsequent tests were cleaner.