Why not use a POWER STRIP?

Thanks a lot! this is the one I have right now, maybe you will know better than me if It will do the job or if I need to buy another one. (Glowforge basic) 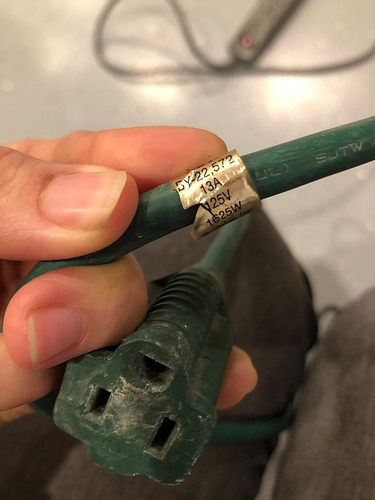 Legal CYA. They can’t tell you that you can use one because then the user can go back to GF when the chose the wrong one and it burns up. I have been running mine on a 20 amp power strip with built in surge protector and in spite of dire predictions from everyone my GF has yet to catch fire.

The problem with a lot of power strips is they have cheap surge protectors built in. These surge protectors don’t work well, especially not in series with the built-in surge protector in the GF. A vanilla power strip without a surge protector and with a high enough rating to handle the power draw is the same as an extension cord with the same specs, just with the added danger (excitement?) of possibly being overloaded and blowing itself and everything else up if the user doesn’t pay attention to the power ratings.

My opinion, does not reflect the official word from Glowforge. Follow at your own risk.

Provided it is in good condition, has not been driven over, crushed, burned, melted, etc, that rating is well over the 800 watt rating of the GF and should be fine. If it has been damaged, DO NOT USE IT. It is not worth the risk to use a damaged unit.

Hahaha no problem! I read a lot about the subject but mostly about the surge protectors so I still have my doubts about the power strip

To go against the manual or to be conscious thats the question!

I’m feeling compelled to move this to Beyond the Manual…

Thanks @ben1 hearing that you have tried it with no problem gives me a bit of a relief. I will go for it at my own risk… cable is in perfect condition and it will be plugged to the wall

There is no issue with “cheap” surge protectors, they will not affect the way the machine operates. The concern over multiple protection devices in parallel is unfounded.

GF and CF on power strip Beyond the Manual

MOVs are installed in parallel inside many surge suppressors to increase energy handling capacity. There is no harm in running multiple strips in series, you’re just adding more varistors in parallel.

I agree wholeheartedly with you on this, for the most part. I have seen some of those cheap power strips fail even without being overloaded, hence my above statement. Not worth the risk, even if it is small. The risk comes when they are daisy chained and the load exceeds the reduced load capability of the weakest link.

This is my second unit because the last one suddenly stopped working… will play safe! Thank you all anyways

You’ll want to use as short of a cord as possible as well. Don’t just throw a 100 ft cord on it because it’s what you have.

I confess that I even had my pre-release on a power strip/surge protector from day one. It’s a beefy cord and heavy duty strip that I got from a school that closed. Built into the cart/table I have.

Me too since PRU days. And that plugs into a beefy UPS. And everything is awesome…

Mine has run on a non-protected strip since day one. My home also has a whole house surge protector in the breaker panel.

I have an appliance and its manual first states that they supplied a short (3 ft) power cord for safety. They then go on to say you should use it 6 feet from any wall.

I will just add my two cents that as long as that cord is in good condition and you are not using it to power anything else, it will work fine for your glowforge.

Part of the issue is that power strips are notoriously poor quality, as is many extension cords. House wiring generally passes an inspection and meets code. Generally (I’ve seen some shoddy hacks in my day).

But power strips? They should pass inspection… but, yeah, ain’t nobody got time for that when the factory is cranking out 18zillion $3 power strips.

This is an example (not mine, thankfully) of a cheap power strip with a space heater plugged in. 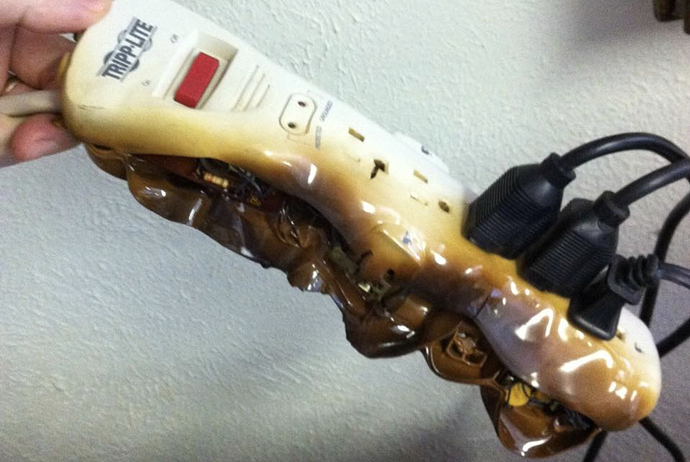 That’s the other issue; might well be counterfeit. Counterfeit product sold via Amazon is unfortunately common.

Many appliances have this disclaimer. Most people ignore it. Heck, a lot of computers say the same thing and you’d be hard pressed to find a desktop computer anywhere that isn’t plugged into a power strip.
The problem is that most power strips are made with the absolute bare minimum materials to function. They use super thin and super cheap internal wires. No matter how safe the strip is, most electrical appliances work better when they are supplied by thicker wiring. It is a barely noticeable issue for the short distances involved inside a power strip, but it’s still there. If your strip has a long cord with thin internal wiring it may be more noticeable. If you are in the US and your house was built or re-wired after the 1940’s, the outlet on your wall has 14 gauge wire at a minimum (most likely 12 gauge solid copper wire) firmly attached to a receptacle that is rated for 20 amps.
A power strip with the same specs will probably cost you quite a bit more than most people want to spend, and they are not as readily available as the cheaper strips. Most people will buy the 3 dollar power strip and assume it’s good because, “they can’t sell an unsafe one, right?”. Power strips are also often associated with sloppy installs where damage to the wiring from foot traffic in the area can be a concern. People also often plug multiple high-draw appliances into one strip, which can cause multiple problems, not the least of which is fire. Another issue can be electrical interference from other appliances, which can occur with regular house wiring, but would be increased if the culprit of the interference is plugged into the same power strip as an appliance that is sensitive to interference.
That said, I personally wouldn’t worry much about putting my GF on a high-quality strip that’s rated for at least 15 amps. You can buy those for under 20 bucks. I’d just limit what else I put on there and make sure I protect the set-up from physical damage.