I started out making it of the PG medium draftboard. After making a couple minor adjustments to the design, to adjust different depths, I made it on PG medium maple. I did one pass using the 3D engrave proofgrade preset. To finish it off I did one pass at manual 700 speed and 30 power. The variable setting was still checked, though I don’t know if it actually does anything in manual mode. I cleaned it with a toothbrush, dish soap and water. It warped pretty quickly after cleaning, anyone know how to avoid that? 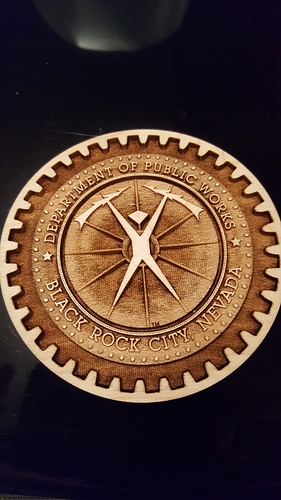 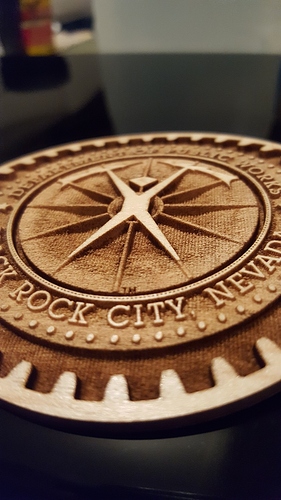 Okay I will try, thanks.

Neither of those will warp the wood or raise the grain, and no additional rinsing with anything else as they don’t leave their own residue behind.

So does it just dissolve the residue? Do you use a brush and just wipe it off? Sorry, just curious how it works.

Look great! I can’t wait to try a light pass with a sand-blaster and see what it does for a effect and clean residue and not warping wood. Still waiting till end of January, but starting to ramp-up on software.

I’ve had luck using soap/water and then immediately following up using a good, hot hairdryer.

Denatured alcohol (from Home Depot) in conjunction with a 2” paintbrush does a fine job removing most of the char and since it is a mixture of ethanol and methanol (with essentially no water) the wood doesn’t swell and warp. It dries quickly too. After trying isopropyl alcohol and the orange cleaners, I have settled on denatured as my go-to cleanup agent.

That’s awesome, you should! I was wondering if anyone here would know what that was. I’ve worked for DPW for a long time. I bet we have some friends in common, though i did take a three year break so I don’t know a lot of the new people on crew.

I hadn’t thought of using a hair dryer, great idea. I just put a paper towel on top of it and left is sitting under a gallon jug of water overnight. The paper towel absorbed the excess moisture and it flattened out pretty well. This method is obviously not ideal and would not work for larger objects.

After scrubbing with a solvent like alcohol or acetone, @mpipes had a great idea of rinsing with a blast from a spray bottle of the solvent. Putting a little velocity into the rinse.

What a great idea!

It really is. I can’t believe I didn’t think of that!

Nice, I started two years ago working at the staff bar with jake and been friends with Erika who runs the water and snacks truck for a long while now. That engrave is pretty bad ass thought… cant wait to start my own pew pews. Should be here in like two weeks. Whoohooo

While I am unaware of who DPW is, I do know where Black Rock Nevada is…well when it’s inhabited.

I hazard a guess that that is the case. Never been to the big Burning Man event, even when I lived in Vegas. I am doing the little regional burn events here in Texas though. Lots of fun and great people.

I love Nipps! I worked for Heavy Equipment this year, used to work for Power before my hiatus. Happy to have met another DPW member here! ONE OF US!!! LOL.

I’m working on a color inverted 3D engraving in acrylic right now of the same image. I reflected the image vertically and inverted the color so that it will be viewed from the untouched side. I’ll post my results here when done.

My name is Summer BTW