Can I cut through 3/8” basswood if I use full power and multiple passes? Will the laser refocus to make a deeper cut?

Can I cut through 3/8” basswood if I use full power and multiple passes?

I suspect so. Hopefully somebody who has tried it will pipe in.

Will the laser refocus to make a deeper cut?

I think that if you type in a particular focus height that overrides auto and it will hold that focus height for all passes. For “auto” focus (ie you don’t type a new number into focus height and just let it stay the material height), it’ll measure for the the first pass.

I think I read somewhere on the forums that they intended to make multi-pass work and lower the focus for each pass, but I’m not sure it does that yet. Perhaps one of our resident puls file analysts will be able to note whether that is the case.

The above is for a Pro.

Don’t you mean slow the speed down a little?

I cut 1/2" poplar, which is much harder than basswood. I bet you will need 2 passes, but it should work fine.

Yes; either slow it down or bump the passes to 3.

Cool, thanks all. Was here at the store thinking about picking up a piece or two. Looks like I’ll be the guinea pig and report back!

With the Standard or the Pro? How do you do the cut?

If I was trying to cut 3/8" basswood on a Basic, I would try full power, speed 200, 2 passes. That is just a guess though, I don’t have a good feel for the difference between full power modes. I would be surprised if you couldn’t get a nice cut one way or another, though.

If you cut through but see a lot of flashback marks on the bottom of the wood, it means you are blasting through too strong on the last pass… increase speed until the flashback char is minimized.

I’m having a heck of a time cutting 1/4" plywood. So far I’ve even done as slow as 150, 2 passes @ 100% and still doesn’t go through the material. Any hints on what I have to do vis-a-vis settings to get all the way through?

For ply wood, the settings can vary wildly depending on what the center plies and the glue is made out of. Similarly some MDFs just can’t be cut.

I’d try 3 passes. If that doesn’t make it, you can try all the way slow. Or run the cut twice. You may want to manually lower the focus for the second run.

Thanks. Do you know what effect changing the focus for the piece make? For example, the plywood with blue painter’s tape mask is 0.236". Would changing that to 0.25" make a difference? If so, what would that diff be? I’m hoping that’d make the laser cut deeper.

I finally did a FP cut at speed 100, and though it charred the heck out of the sides, it did go all the way through

If you don’t set the focus distance it’ll measure the material and set the focus automatically which is usually a good place to do the first cut. For the second attempt, I’d try to have the focus just below the depth you reached with the first run.

Ohhhh… so that means less than the actual thickness, right? Making the measure smaller means the laser focus will move down, yes? 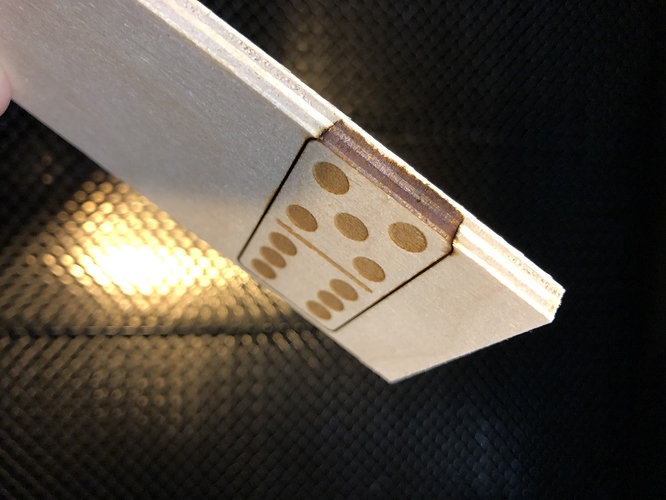 Three passes at full power and speed 200 was the winning combination. The wood is Midwest Products 1/4” craft plywood. Scorching wasn’t bad along the sides. 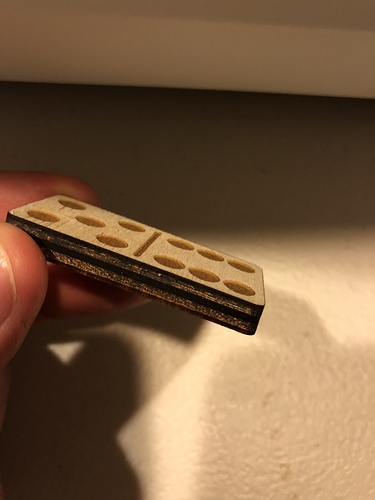