With the actual release of 3d printing I figured I would compare the new settings to my old fake settings. Major differences in depth detail. I’ll need to come up with some method for removing char now. 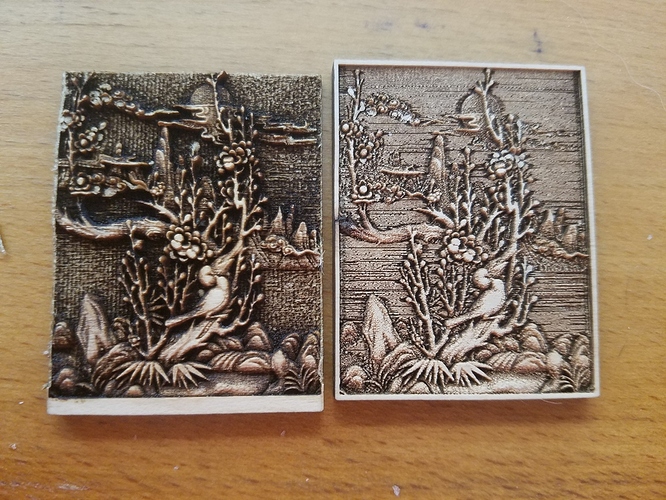 Super bonus content, comparing the GF engrave to a trotec engrave of the same file. Now they clearly dialed in their settings and did 4 passes plus hefty cleanup, so not the best apples to apples comparison, but interesting to see how different details are treated.

Oh and excuse the off center cut, I forgot to add a cut layer and had to do it after the fact and the ol’ 1/4 inch of doom got me. 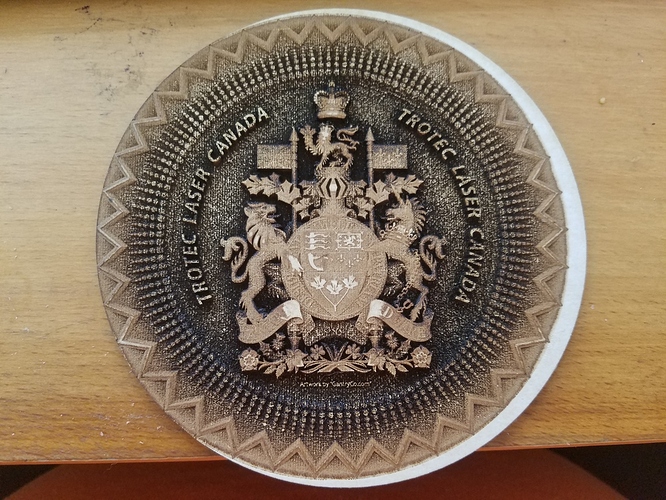 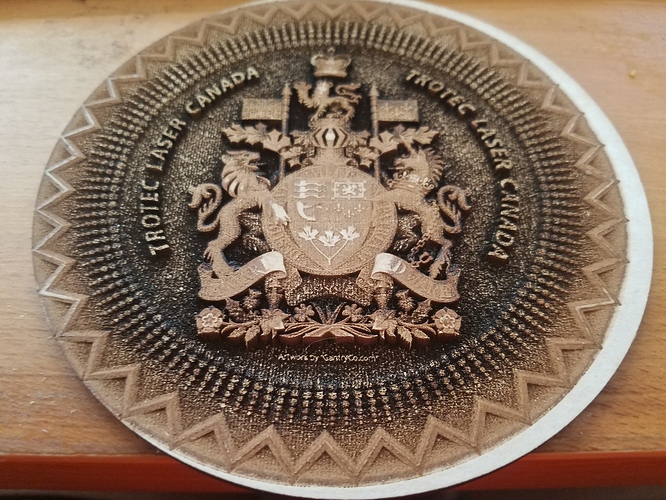 Just so we’re clear, which engraving is the new one in the first photo?

Ok, that’s what I thought but just wanted to make sure.

Loving playing with the 3D engraving, though still plenty of stuff to mess with. Pictures to come.

Vinegar works wonders on any charing.

Vinegar + scrubbing or just vinegar? I am pretty against scrubbing

I use vinegar and a toothbrush on my other laser’s edges or faces when there is char left. Then just dab with a paper towel.

Wow - what a big difference! Thanks for sharing! On my to-do list that is forever long but itching to try this!

Still along ways to go though. I hope they can still improve this, as it’s not precisely what I’d say is professional quality yet.

I don’t have my GF Pro yet, but can we do two passes on 3D engrave and then two light ones with a GF? If so, how close can we get to Trotec? Does 3D Engrave already do two passes?

For a single pass and basically no cleanup its pretty good. If I had to guess I would say the dominant change is the maximum depth they get automatically now. This is cutting about 1/2 way through the material for the darkest areas, Like I can pretty clearly read the “artwork by gantryco” at the bottom of the disc, which is probably 5pt or something crazy tiny.

The more subtle shades of white detail seems to need more work, or perhaps this is where multipass shines. Slight changes in shade like in the shield seem to lumped together.

Haven’t tried yet, but others have soaked items in alcohol for the no-scrub / no-warp cleansing.

Yeah, that was @PrintToLaser. I was looking for that just the other day.

Nice to see people working with the new 3D settings. Looking forward to trying 3D out!