I’ve seen many people asking about the passthrough slot on the Pro. Thought I’d share some stencils that I made for a bar in Chicago called Slightly Toasted (a gourmet toast and whiskey bar that you should check out if you’re in the Chicago area or their other bar, Little Toasted). I made five different stencils in all for them. 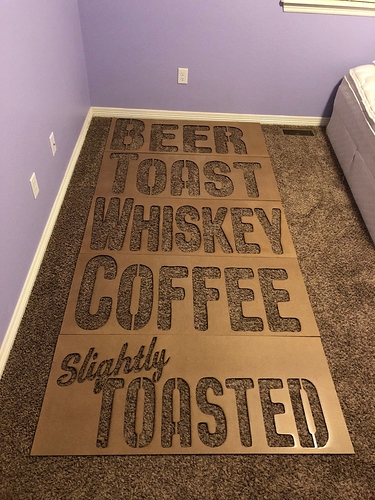 I used Inkscape to create stencils from the logo and the words he wanted to have stencils for and made each a separate color so that they could be cut at as different operations.

When cutting, I pushed a 4’ piece of hardboard (that I had cut down to the 20" width of the Glowforge from an 8’x4’ sheet) into the slot. I quickly found that I needed something to support the other end since the material was so thin and long, it bent and lifted off the crumb tray. I used some old shoe boxes and a bed to support it before going into the Glowforge, and more shoe boxes out the other end (good thing I had just bought new shoes). This will be something I take into account when I design a better setup.

I cut the first letter and left the rest of the letters hanging out of the design window of the Glowforge so they were ignored.
When that cut finished, I slide the hardboard (keeping the ‘top’ of the board against the right side of the crumb tray) thru to about where the next letter would start and then on the Glowforge app I selected the entire design and used the up arrow key to move it, keeping it in the same horizontal position. I’d try to line up the edge of the previous cut that I could still see with that part of the design on the screen (and attempt to compensate for the slight offset that it has).

I’d then start the next cut and repeat. A couple times the removed part of the stencil caused the piece to jam up in the slot, but I was able to move it eventually because I knew that the hardboard was kept flush to the right of the crumb tray as my reference point to put it back when needed.
I wish the passthrough slot could take thicker material, but I’m definitely enjoying it so far!

Really well done!! I can’t wait to use the passthrough slot

Amazing job! This is the most successful passthrough project I’ve seen so far.

Great job figuring it out!

Now I got to make some toast next time I pour a few fingers.
Sounds like a good combo.

Signage pleases. I am sure they will love the stencils.

Thanks! This means a lot!