My 7th Anniversary is coming up in June, which is the “copper” anniversary. I also know my wife LOVES the Ferdinand the Bull story, and especially the iconic Robert Lawson illustrations. So the juxtaposition of these ideas caused me to come up with the idea of etching one of the Ferdinand illustrations on a copper plate with marking powder.

During the process of researching and testing the idea, I learned that thinner is better. Apparently, the thicker the metal (and I bet this applies to all metals), the better a heat sink it is, and therefore the longer a laser must dwell on a spot, dispensing energy until the marking powder changes states.

In my case, I used a 12 x18" Copper Clad Laminate PCB Circuit Board. The whole thing is .062" thick, but the copper laminate is only .0014" thick, so there’s little to dissipate the heat, which translates to better speed. To mark with Cermark, you’re always going to be at full power, so the only question is how fast you can go.

I first tested marking ability by using a quickly ginned up graphic. At this point I should mention I have a Pro model and I used Cermark LMM-14. There is also LMM-6000, but some digging revealed that formulation is better used for stainless, and the -14 is better for other, softer metals. I got distracted during the speed test, and would have stopped it at 25 (250) had I seen the damage to the laminate begin. In the end, the final test actually burned through the first layer and the PCB material beneath and distorted the second laminate. The test showed the best results at full power and 75 (750) zooms.

To do the final product, I cleaned the copper with Windex, applied two light coats of LMM-14, which dried completely in about 2 minutes. BTW, when they say to shake the can thoroughly, a full minute proved to be grossly insufficient. Shake the can till you sweat! The powder rubs off at the slightest touch, so I very gingerly placed the sheet in the Forge and pinned it with those medium ply hold downs we’re all so crazy about. The engrave was a vector because I wanted full power all the time for uniform marking as opposed to a raster using varying power. The full burn took a little over 90 minutes to complete, at which point I washed it with a sponge and dish soap and the whole thing came clean with virtually no effort.

Another thing to note about marking with LMM-14 is that it does wash out a little bit of detail. If you look at the detail of the bride, she has flowers in her hair and is holding a bouquet in the original vector file, but those details were lost during the print. The edges are sharp though, and I did confirm I had the right focus height beforehand.

I would be discovered by SWMBO if I tried to take the time to frame it myself, so I plan to sneak the print out of the house and have someone else frame it to save the surprise. Before I do that however, I feel like I should seal it to prevent the copper from oxidizing, and I would welcome any recommendations as to exactly what to apply to the print. 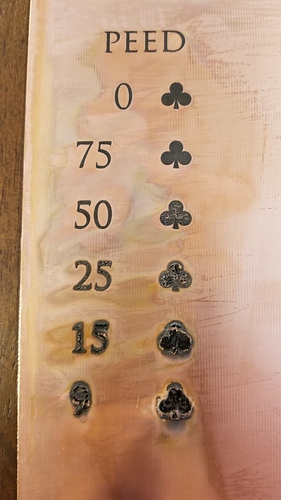 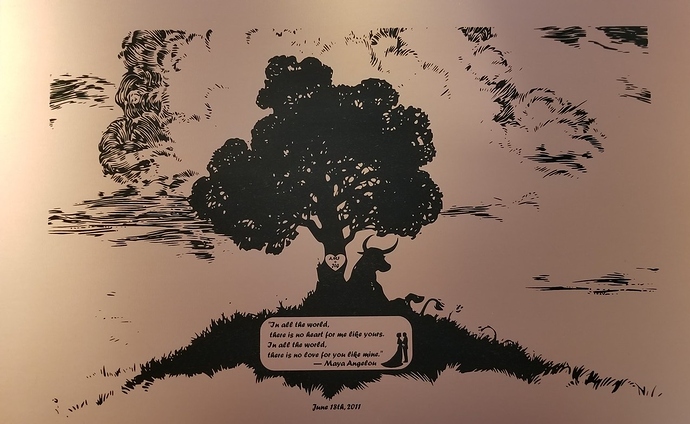 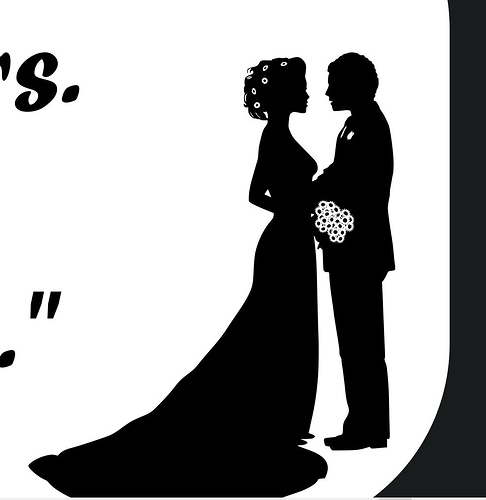 Oh yeah. I’m expecting to score big with this one!

Can I say bullseye

I was thinking urethane myself, but I don’t know if there’s something that’s better formulated for this material. If I don’t hear from someone who has a different idea I will start sealing it this weekend, sanding between coats with steel wool. Thanks for the input!

Lacquer. Spray it on in case it ever needs a recoating it does not need to bel sanded just a good wipe and respray.

Stunning results! Thanks for the write-up of what all you did. That was helpful! Oh, and happy early anniversary!

Great suggestion. I like the idea of not having to sand it. Thanks for the input!

Congratulations on your anniversary… Nice work!

Oh yeah. I’m expecting to score big with this one!

That hit the mark! Here it is all finished. 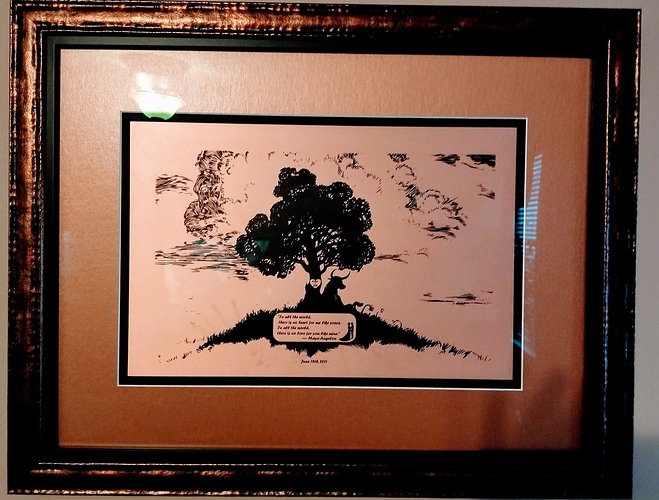 That looks fantastic ! Nice job including framing and mat !! (Am I the only one wondering what if PEED was used in the testing process?

Am I the only one wondering what if PEED was used in the testing process?

For whatever reason, when I went to position the test file in the GFUI, it left the “S” behind, and I decided I didn’t need it. I failed to consider that it might look a little funny if I posted it