This is my first shot at designing an “edge lit sign” type of thing for Acrylic.

Wanted to keep it simple, so it’s 3 layers of (probably 1/4") acrylic. The outlines will likely be cut out of some kind of translucent colored acrylic, with a similar lighting color. The center layer will have the design engraved on it and will be made out of clear acrylic - (cause that supposedly reflects the colored light better).

(And please forgive the render…it was taking longer than it took to create the file, so I cut myself off. Obviously you can make it with whatever colors suit.)

Notice the clever phrase that pops up in the image…that is because I had the brilliant idea of using the word “idea” in the engraving, until I took a quick look online.
(Not quite so bright an idea to use “idea”.

Me and everybody else in the known universe!) 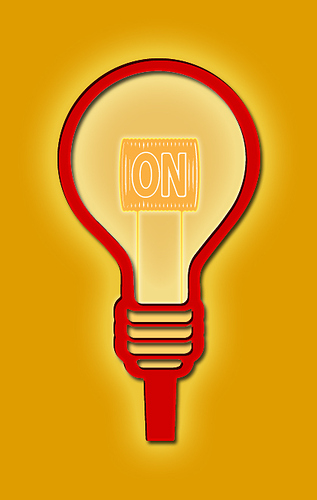 And I seriously hope it looks better than my render.

As I was staring at the shape of the bulb, this also popped into mind: 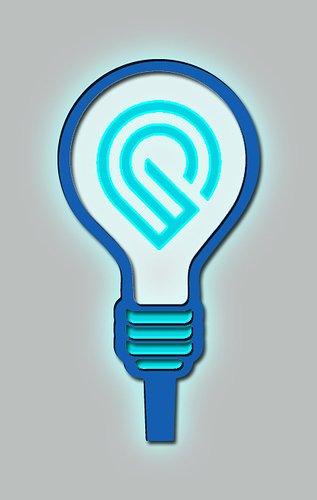 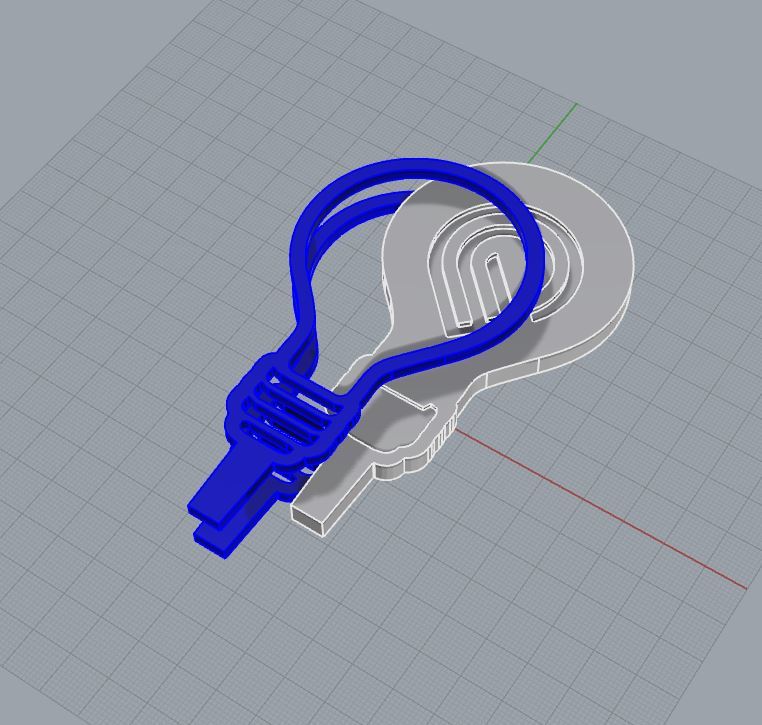 (I’ll take that file down @dan if it’s not allowed to use the GF logo that way.)

Down the road, the idea is to create some sort of light base for it, with a slot to hold the standardized prong at the bottom, so cool nightlight type things can be swapped out at a whim.

Anybody got any idea what kind of glues you’d use with clear acrylics?

Anybody got any idea what kind of glues you’d use with clear acrylics?

It’s actually a solvent. It causes the two layers to fuse together vs. gluing them. It’s clear. I use Weldon. It’s serious nasty stuff (methylene chloride) so definitely use eye protection and don’t let the kids do it.

The problem when you edgelight acrylic is that the translucent colors don’t edgelight… The clear would, but it’s not touching the light source and the light won’t travel though the other color very well.

Used some scraps to demonstrate. 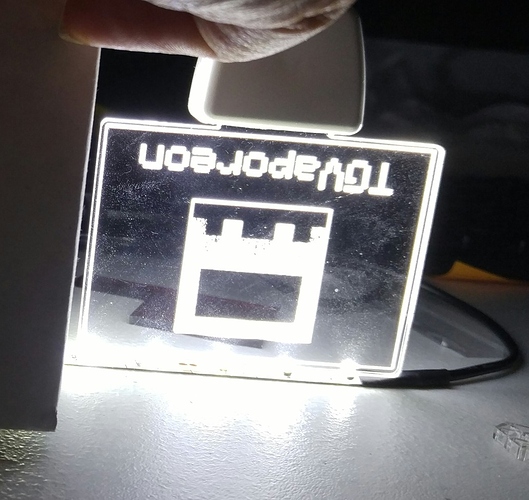 This is only 1" worth of translucent red. See how much less it lights up the clear? and with several disconnected parts within the color, I doubt the clear bulb will light up at all in your design.

Plus, as you see, the clear will take on what ever color is closest to the light source… so It won’t be white… 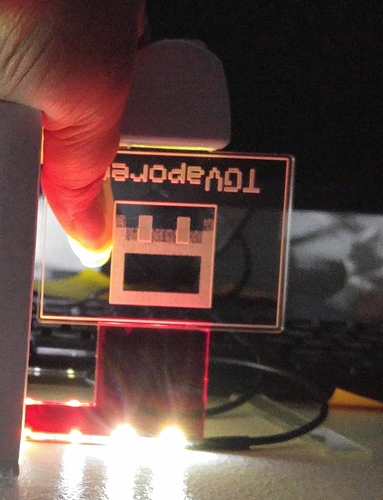 With such a small base, does light get up to the top area well that is so much larger?
Never thought of that till now.

You can’t tell from the jpeg I put together, but the centered clear sheet does go all the way down to contact the light source directly.

The idea was to shadow some of it with the colored outline.

(and…of course I have no idea if it will work or not.)

Ugh!, that’s in the paint stripper we use to clear a clogged nozzle. (great!)

No earthly idea. (Chuckle!) I guess we’ll see. (Easy enough to widen the base if needed.)

I actually considered that if you had two layers of color and 1 layer of clear - say red/clear/red - that you’d put the lights inside the frame around the clear bulb shape layer so you’d get a continuous edge light all around.

Probably want a narrow cut of the outline in the color too - that way the middle layer is actually (coming in from the side) color piece, light strip, clear piece. From the edge it would look like a solid colored shell. The light strip lays in a well between the middle narrow color piece and the inner clear piece.

Then you just run the wires down to a power supply that’s either part of the base or comes off the base to the floor.

Make more sense if I drew it out in Corel I guess.

This would be what the bottom flat edge would look like - it’s a sandwich. 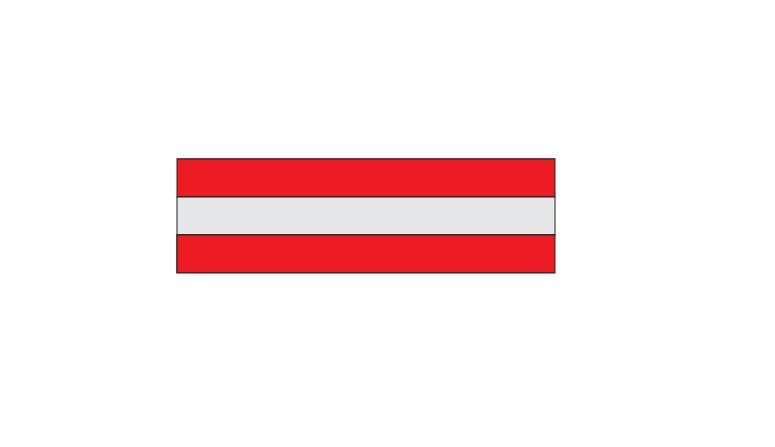 The idea was to run the lights right down the center of the sandwich so they contacted the clear layer.

The colored outlines are just to give the whole thing depth and add stability to that rather skinny base. 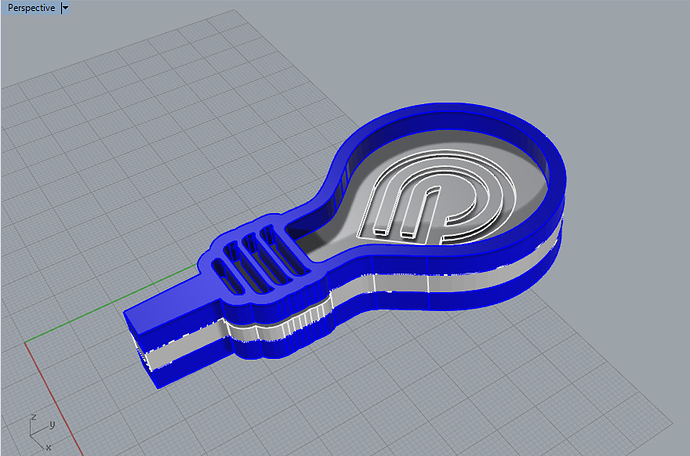 Annnnnnd…I see a place that i want to modify on the engraving to give a uniform edge around the outside, so it’s a good thing I did this.

Taking the files down for temporary maintenance.

Lucky getting to work with Rhino. Wish they adopted some cheap pricing for hobbyists.

Oh in that case, yes it would work and look supercool… I can make one if you want to see.

What I was thinking of was having the center clear layer recessed so a strip of surface mount LEDs would tuck in. The extra rim of colored acrylic would be just to finish the edge so you weren’t seeing the back of the light strip. That way you’d get 360 degree lighting of the clear layer

Doesn’t matter how thick the acrylic is on the prototype - I just want to see if it works!

(Oh and scale it down so you don’t waste too much acrylic, in case it doesn’t work.

Oh - yes that is a great idea! I was planning to build a groove into the base, as soon as i figured out what I was going to use to light it.

(Matter of fact, that might be version 2, if the first one works out.)

Do the little strings of lights work better than a single battery operated one?

Do the little strings of lights work better than a single battery operated one?

Definitely - especially for larger things. It’ll give you a more even spread of light. The SMD LEDs (also battery powered) are flat not like the little tiny bulb type of LEDs you see in a lot of flashlights. Check these or these.

The strips can be cut between lights so you can customize the length to the project. I used the latter linked ones for a color changing acrylic pyramid table in Joseph & the Amazing Technicolor Dreamcoat this spring. The remote allows you to pick colors, strobing effects, flashing, etc. Fun stuff.

AWESOME!
(I know who’ll be getting hit with tons of questions in a few months!)

I use a variety of the flat LED strips…I have ones that are battery powered, plug in ones with a wall adapter and usb powered ones.