A different kind of box edge

I’ve had this idea percolating around in my head for awhile, and finally did it. The idea is to make stitching holes along the edge of a box (like leather box edge stitching) and bevel the edges so they would meet in a mitered corner, then stitch everything together with thread, cord or wire. Here’s the final result, one with beads and thread and the other with wire. I like the wired one best. 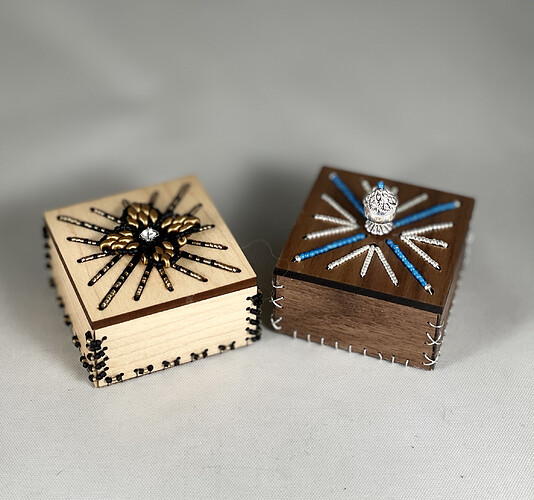 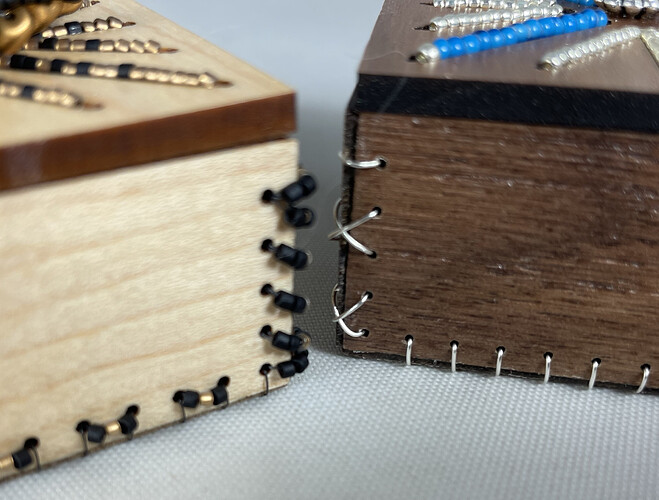 Here’s what the insides of the box looked like before doing any stitching: 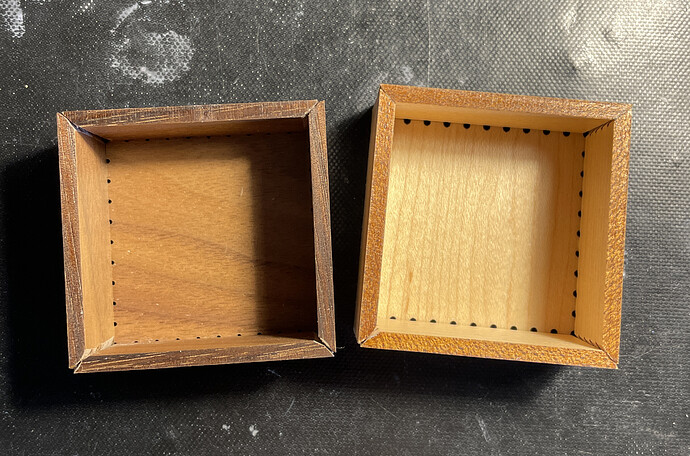 For the lids, I engraved grooves for the beads, with holes at the beginning and end of each groove so the thread or wire could be hidden inside.

To be honest, the corners didn’t work out as nicely as I’d hoped. The 3D engraved bezels were nowhere near 45 degree angles and I had to sand them even with a belt sander. And it was really hard to do the wiring when the width of one wire would block access to the holes for the next wire to go through a close hole. Still, I’m fairly satisfied. I don’t think I’ll make any more of them though.

Nice, this is exactly how you join stitch and glue kayaks. I like your end result.

As for mitered corners, a 45 degree jig (and a little tomfoolery with interlocks if your parts are too large) would do the trick, I bet.

You could add another mirror.

Now, there’s an opportunity for glory.

You could another mirror.

That looks like a really cool idea, but I’m too chicken to try it. Maybe one of the interchangeable heads we can look forward to in future will do that…

I kind of thought it was but, was hesitating with the general direction of the thread.

A cool idea, sorry it was a struggle … but so glad you were able to work through to completion and share with us.

Love the beads … especially on the lid.

exactly how you join stitch and glue kayaks.

And Polynesian “canoes” (after 100’ one should not call them canoes, especially as they could point 30 degrees higher at several times the speed of the ships of the folk calling them that).

It might be interesting to have a square piece with grain running 90 degrees to the sides and sew that in. I have been playing with that idea (glued though, with tongue in groove)

A butt joint would be super easy with this technique. It was the 90 degree angles that caused some angst.

Well, no matter how you accomplished it, it looks great!

A butt joint would be super easy with this technique

I was thinking a bit different than a but joint. more something like this with the dark grain end view from this view,

What a novel thought brought into reality - well done! Makes one think…

NIce work! I like the stitch idea! Can you get them really tight? I was wondering if a saddle type stitch would be good?

It turns out the stitching is mostly decorative, so you could stitch it anyway you like, including saddle stitches. I did glue the sides together before stitching as it would have been a nightmare to try getting all those pieces to behave otherwise.