Had a fun idea in my head for some magnets/earrings, but didn’t want to meticulously draw it all out. Ive known about the various effects in Illustrator for some time, but never explored it very much. I figured for what I wanted to do, the zigzag effect would work, but I couldn’t get exactly what I was intending, and it was giving me really strange effects.

Decided to see what the other effects were all about, and found the Roughen tool. Wow, this one was exactly what I needed! SO I drew out the basics of a pineapple, which is simple enough, then hit the lines with the Roughen tool, and instead of meticulously drawing it all out, I meticulously moved the nodes around until it was where I liked it 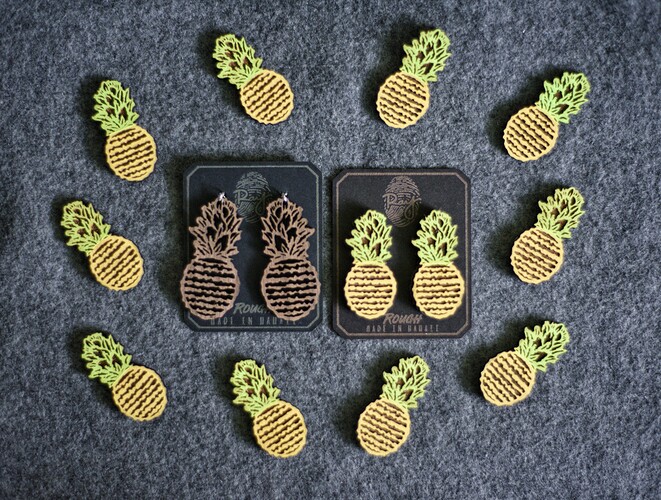 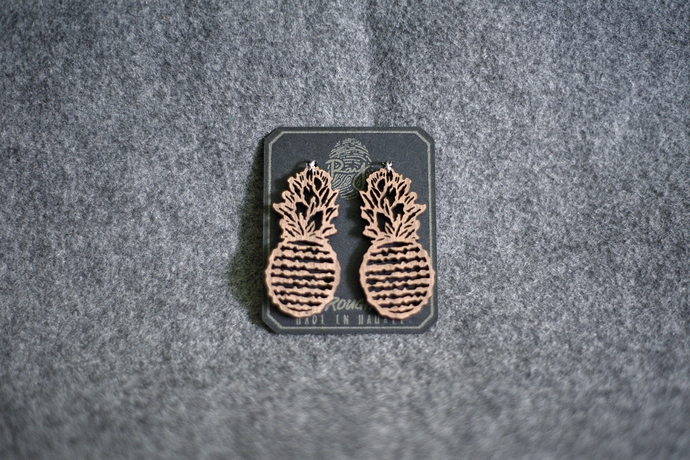 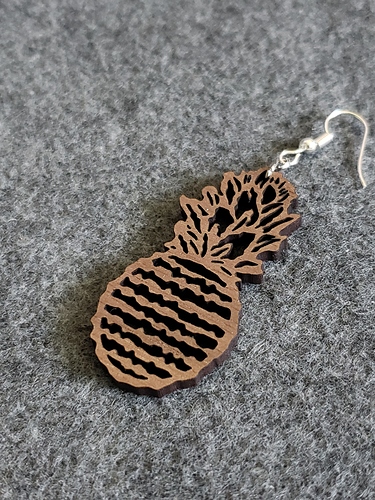 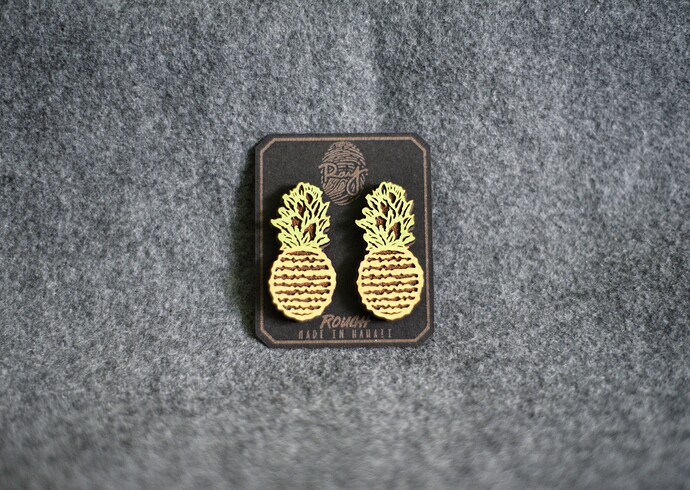 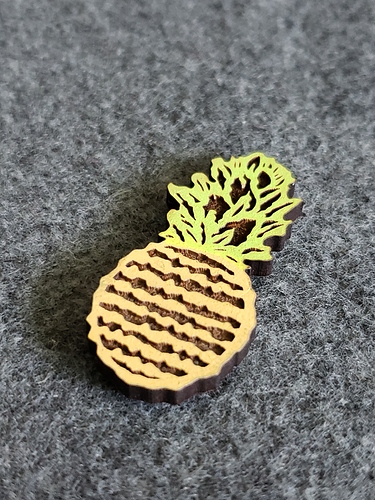 The magnets (the colored ones) were easy to engrave, but took me a while to figure out the best method on painting them. I used Draftboard, and as many of us know, it’s almost as absorbent as my baby’s diapers. The original paint pens I used were great, but the tips are so fine that it was far too tedious to be worth doing a lot of. I went down to an art store, found thicker paint markers, and the green turned out to be great, the yellow also just was absorbed into the wood. If I did multiple coats, then the yellow was okay, but again, more work than I was wanting to put into them. I remembered I had some yellow squash colored 2 in 1 paint, and that did the trick! Just did little score lines where the yellow needed to stop, then peeled the masking back to that. Blasted them with the paint, let it dry, then went back in with the green paint marker to fill in the tops. I left them unmasked, lasered them, then used baby wipes to clean the residue.

As you can see, they coated the Draftboard quite nicely, and I’m happy about the results. I used the following supplies for the magnets:

Some of my process can certainly be tweaked to yield easier results, but again, I’m quite happy with what I got

PS
If you’re noticing the different engraved colors on the cardstock, then:
A) Top marks for being observant
B) It’s because I used two different types of paper

Can you clarify the process? You scored just the shapes for painting? And then cut and engraved? Snapmarks?

Snapmarks? I wish! So I went into the cut lines and found about 3 nodes creating a chunk of the original cut, copied them, changed the color, then scored. I pin everything down so nothing moves, engrave one side for the magnet to sit in, cut a square, flip to score, then paint. Place back into the holes when the paint has dried and finish the engraving and cutting.

Alternatively, I could have flipped them over and did a draft score where the cut was going to be, but that would mean I’d have to get everything back exactly where it was, and that never happens, so I opted to do tiny scores that would be either hidden under the paint, or cut over.

Hah. I wish, too. But selfishly, it’s good to see a workflow without for those of us still waiting.

That’s a lot of steps, but the result is impressive. Looks really clean.

As usual, stunning work! Along with a great explanation of the process…

What paper are you using for those engravings? They look really nice!

Here ya go, I detailed my settings for it, and others shared their own settings as well:

Cardstock Settings Beyond the Manual

I’ve also tried really intricate designs and had the paper be eaten by the tiny flames. I haven’t tried anything like that in a while, but when I do, I’ll be sure to post some more settings if I find a golden ratio 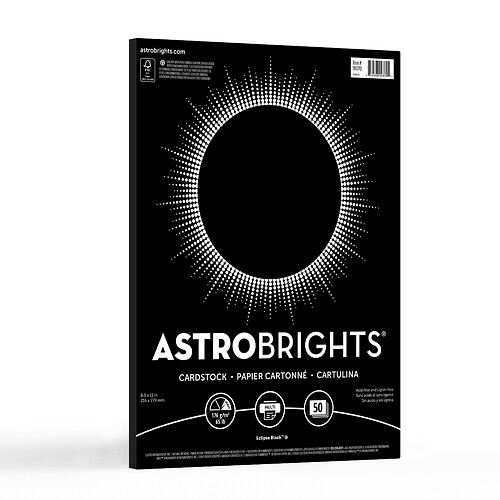 With that paper, I’d glue two sheets together in order to get a thickness that I liked. Much cheaper than the other one, but I got tired of gluing them together so I switched

You inspired me to check out the AI filters – loving them! Awesome shortcuts to more interesting lines.

A little less love for not being able to get outline strokes on some of the effects, but that’s what screenshot and trace are for!

Thanks for the write up, and specifically the links. Great results on the pineapple. 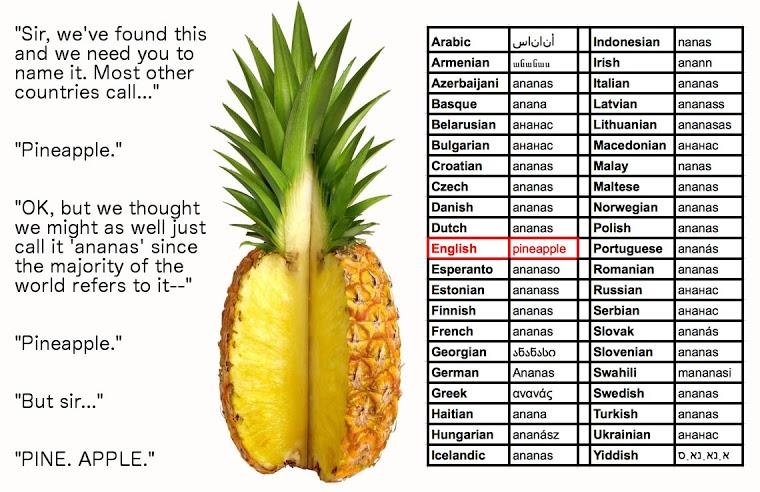 You scored just the shapes for painting?

I wasn’t on my computer when I answered this, so I also thought I would share a snippet of what the file looks like for anybody that doesn’t quite understand what I did: 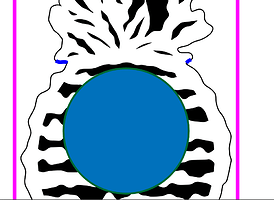 So those tiny blue lines were what was scored (emphasized to be able to see them) and those were copied and placed right back on the cut line. I considered doing more lines like that for the top so I didn’t waste my paint marker, but I know the general shape and I’d be saving minuscule amounts.

You inspired me to check out the AI filters – loving them! Awesome shortcuts to more interesting lines.

Exactly! There’s a “lot” that I knew before becoming a member of this forum, but that turned into a smaller amount of knowledge compared to the methods people share here. I figure it’s a pay it forward type of deal, because I certainly be as comfortable with this as I am if it wasn’t for others being so open about their process. That’s the story of my whole life, though, so I’m used to it

Great recommendation on the magnet supply

Someone here had mentioned them a while back and I’ve been using them ever since! Their shipping is phenomenal, but make sure you switch to the USPS option, because the UPS option is defaulted, they’re just as fast and cheaper.

@pubultrastar I had no idea! Why must english be this waaaaaayyy

Also, wanted to thank the queen of painting tiny things like this, @Xabbess, because I was mostly inspired by her to even attempt it. She’s one of the greats

That is so funny. We got a fruit basket at the office and I went off on a tangent at lunch today wondering why English is such an exception. I get it, that it looks like a pine cone, but seriously.

And then went on to discussing Fibonacci.

Goodness, these are just adorable! Very nice for you to do such a thorough write-up!

Like I said, I do it to encourage others to follow in my process. There are plenty of protects that others have shared that I’m going to get around to trying, and many of those have had great people willing to share their process