A nice chart of Adobe alternatives 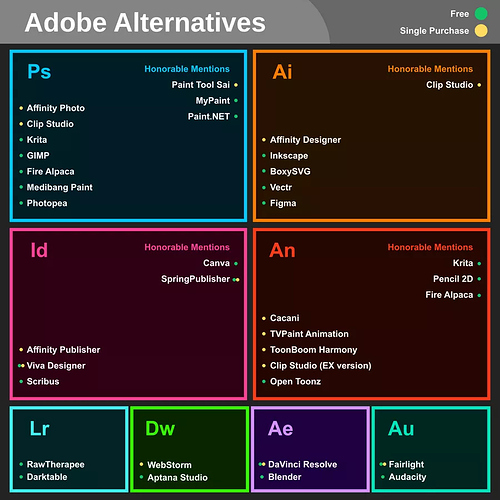 Adobe’s trailing price hikes for its now subscription-only Creative Suite applications. Comic artist Michael Sexton (Patreon) made this handy at-a-glance chart so you know what pay-once apps can replace each one.

Would be nice to see alternatives for their other projects.
Affinity Publisher is in beta right now and is shaping up to be a good alternative to InDesign

I use Corel PaintShopPro. Got a sweet deal for $20 so we got 3 copies. Its just as good as PhotoShop, at least for my needs.

I started as a fan of their products back when there wasn’t much competition and when their software were purchases, not subscriptions. When the budget allowed, I’d upgrade every few years (Adobe CS4 Production Suite ~ $1295). A good chunk of those tools got worked constantly: Premiere, AfterEffects, Photoshop, Illustrator.

By the time I was ready to pony up for a rejuvenated Suite, Adobe decided a perpetual I.V. into the bank account was the appropriate reward for license-abiding customers. That’s when this lifelong PC guy went to explore greener pastures with his first MacBook Pro purchase. The machine’s bootcamp feature let me still use the CS4 Suite in Windows during the interim that I was getting to know Final Cut Pro on the OSX side. Didn’t take long to see why folks adored FCP. Media management alone was eons ahead of the scattershot way Premiere handled things. AirDrop footage/images shot on the iPhone over to the MacBook? I would’ve switched years ago had someone pulled my head out of Windows to demo this workflow.

One-time purchases of:
Final Cut Pro ($299) - saw many routine free updates in the 7 years I’ve been enjoying it
Apple Motion ($50) - fantastic, underrated, and robust motion graphics replacement for AfterEffects
Affinity Photo ($39 *sale) - Removed ANY desire to go back to Photoshop. Affinity’s smart nondestructive tools let me go deeper with edits. Opens PSD files.
Affinity Designer ($39 *sale) - Even before factoring the price/performance ratio, Designer provides the functionality I was previously depending on Illustrator for.

To keep drinking Adobe’s Krewl-Aid, I’d otherwise fork out around $600/year, every year… and extrapolating from the previous way I’d upgrade, that’s $1800 that I can now count on pocketing or make available toward a shiny new MacBook Pro (still happily & smoothly using that 2012 retina MBP)

Come to think about it, not having to continuously throw money down that pit is why there were funds available to pick up a Surface Pro4 in 2016 and outfit it with the Affinity trimmings.

For guys & gals wanting to stay on the PC side and seek refuge from an Adobe Premier subscription, look into the free version of DaVinci Resolve… their Pro version’s a one-time purchase of $300.

THANK YOU Adobe for changing over to your subscription model, you’ve

I still use the last free version of PaintShop from before Corel got their meat hooks into it (ver. 7.04 I think) and you can still find downloads for it and it does work with Windows 7.

I use Corel Video Studio in lieu of Premiere. It’s maybe not quite as high end, but for most people should do the trick.

I completely understand that for hobbyists Adobe’s pricing seems excessive and onerous. But I also see the other side and feel the need to offer some tempering thoughts to all the Adobe bashing.

For many professional designers the new subscription system is COMPLETELY worth it.
Creative Cloud is not for the hobbyist. Neither was the former equivalent single purchase product offering Creative Suite Master Collection.

CS1 thru CS6 were released in 2003, 2005, 2007, 2008, 2010, 2011. A new major release every two years and then every year. There were assorted packages aimed at different industries - print, animation, web, video, and then the Master Collection which included every single product. For the last version, CS6, Design Standard was priced at $1299 and the Master Collection was priced at freaking $2599.

As digital design disciplines converged, having access to many products across “industry lines” became more necessary for designers. (you might be developing web sites and brochures but need to also edit a video with motion graphics or create an interactive animation.)

Creative Cloud includes every single product, constant updates, 100GB cloud storage (eh, who doesn’t these days), a dedicated artist’s portfolio website as well as unlimited commercial licensing for Adobe TypeKit (now known as Adobe Fonts) . This costs $599 per year vs. the previous $1299 or $2599 per year we were paying that included none of those extras. (if you have any connection to education it’s less than $400/yr). Full access to Typekit by itself is $99.99 per year.

Those bonkers prices drove many professional creatives and businesses to only upgrade every two cycles or more which caused endless headaches dealing with compatibility between you and anyone else (vendors, clients, coworkers, etc.) Once you get into the corporate level the legalities of font licensing can drive someone off a bridge.

None of that may matter to the hobbyist who just wants to touch up a few photos or put a few words together in an interesting way. To someone who makes their living today turning out high end design on insane schedules they’re huge. Adobe is now constantly releasing new features that save us HOURS of work and tedium. Puppet Warp, Content Aware everything, Live Corners among just a few recent additions. There’s massive processing power behind what their software does, these days they are delving into AI machine learning (Adobe Sensei). 3D is creeping in to most products (AfterEffects even includes a FREE lite version of the very excellent Cinema4D) All of this isn’t just for crazy kicks - their obsession with streamlining the designer’s workflow shows. Proficient Adobe users can now design as fast as we can think/create without the software interface getting in our way. No more agonizing over which package of products to buy to get my project done - we get all of it including some really interesting beta products. We can create in ways that simply weren’t possible before without a lot of hefty engineering/workstations/numerous other expensive software packages or at all.

Therefore I’m beyond happy to support Adobe development with my $400 a year instead of $2600 a year while getting more stuff. (adjusted for inflation that would be $2,980 today!!?!?!)

TLDR: Feels like it sucks to pay forever but we’re actually spending far less $$$ and getting a helluva lot more.
Thanks for reading

Therefore I’m beyond happy to support Adobe development with my $400 a year instead of $2600 a year while getting more stuff. (adjusted for inflation that would be $2,980 today!!?!?!)

Regardless, for all the folks who are not using all of the new convergence tools but had the option before to bypass upgrades they didn’t see value in, they’re stuck on the subscription checkbook dip.

My sons are professional graphic artists, use the suite 10+ hours a day (I tell them they should balance work better but I’m just the dad

) and they’re cranky about the subscription model. It’s a matter of choices being taken away that they value.

But some embrace the model and it’s good for them. Everyone has to decide what makes sense for themselves. In the context of the Glowforge, the consensus (except for a lone voice in the wilds of Texas

) so far seems to be that a subscription model isn’t something the customers find value in.

On occasion I teach so I’m getting the educational pricing.

I agree the CC model isn’t for everybody, even at the single product subscription. However, the outright negativity and snark toward it seem unfair if one looks at the actual cost/value vs previous system. People now have the option to purchase software that will never be updated again at great cost savings. (You can find CS6 under $100 if you dig around) That works for some and isn’t for everyone either.

The software landscape is filled with choices.

For a profession with minimal overhead, primarily labor (yes, I know, computer, monitor, maybe some color calibration gear), 60 bucks is what, about the median hourly rate for a designer? I don’t even take FULL advantage of the suite, and I know that I get 2 bucks a day value out of it.

If it works for you, that’s great, but I know very few freelance designers who would upgrade annually, even if the option was available (hint: updates weren’t even available annually). Compatibility between consecutive updates was typically a non-issue. I think it’s all well and good to make this argument (which sounds like their sales pitch) from a corporate perspective, but there are plenty of hard-working solo designers and small firms for whom the cost is a burden.

Lastly, there is nothing “unfair” about complaining about a business model you don’t like. The freedom to make business decisions in a free market comes with the caveat that not everyone will appreciate those decisions. Adobe hardly cares if we grumble. If they did, they’d offer stand-alone pricing (or some other reasonable alternative) for those of us who want/need it.