Having so much fun!

I generated the cut file using Matlab. It’s a revolved parabola, for those curious.

The fun really kicked off after adding the lighting. It runs on a 12V wall wart, and is really pleasant to gaze at from various directions. 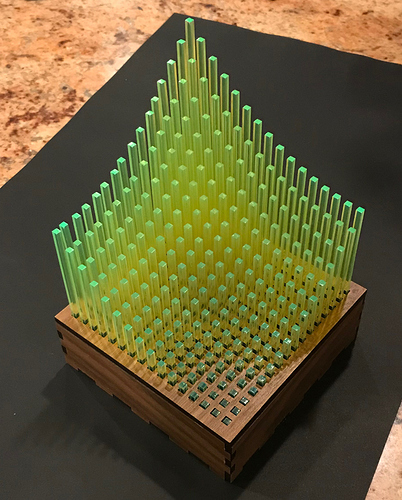 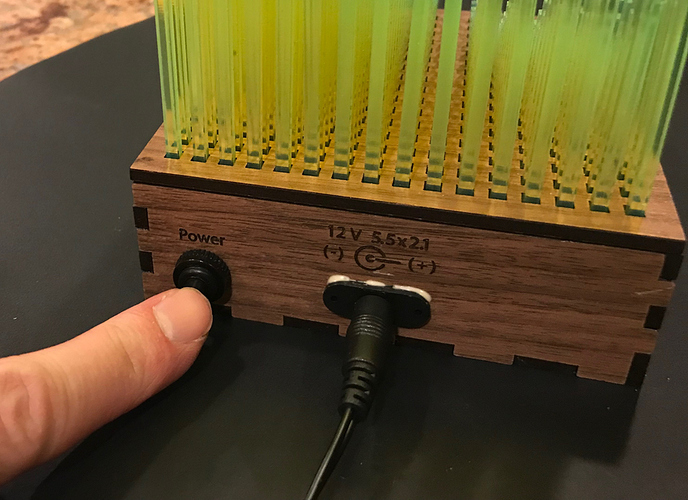 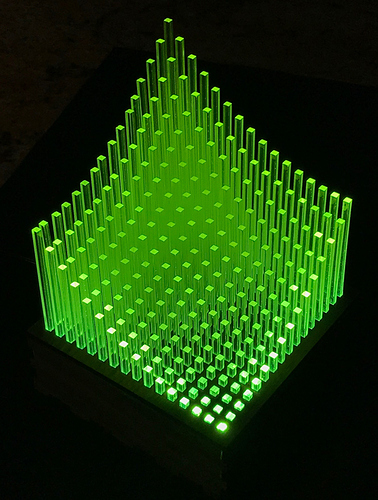 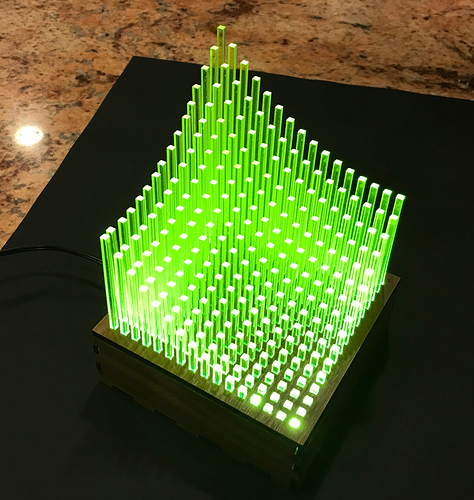 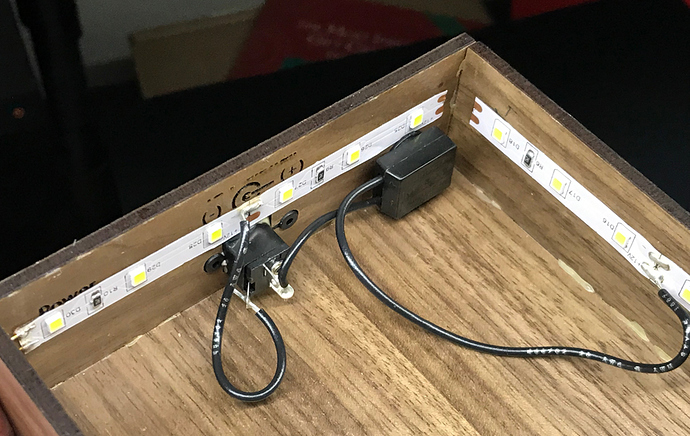 I would never turn it off!

I’m too lazy to count, how many pieces and did you glue or go with a press fit?

If you keep this where people can see it you should put the equation on a little plaque, it might make math less scary for some folks

As @Jules said, that’s a cool thing. I’m a sucker for designs like that. Mathematical shapes and natural shapes intrigue me.

Very cool indeed! And I like how you wired the LEDs—spreading them out around the perimeter of the box gave great coverage compared to a point source in the middle.

VERY cool looking. Kind of thing I look at and just think “I WANT TO TOUCH IT!!”

Very cool looking indeed, would love to see a short video clip of it.

Wow!! Just beautiful. This seriously one of the coolest things ever. I want one sooo… bad. I love the simplicity of the parabola. If I did one I would be tempted to do something with sinewaves etc. but I love the elegance of the parabola.

That’s outstanding! Does it change colors? How was the assembly?

According to the FB group, each row is basically a comb with the teeth pushed up through.

After I hit send I thought of that too, much easier to build and better lighting options.

Really Beautiful.
I am curious about the upright green bits. Are they something you found as square rod or did you cut them from sheet? I picked up one of these pretty cheaply in Walgreens And am thinking of what I might do with it. That design opens interesting possibilities.

This version is made with the PG fluorescent green acrylic, so just a single color with white LEDs illuminating from below. It’s composed of 16 comb-shaped cuts with 16 rods each, for 256 total.

Assembly was a challenge, given my comb design. When I first pushed them all through, the combs wanted to lean back and forth. This warranted a second set of pieces to run across the combs below the wood, to keep them all upright and parallel. I’ve got a design change in mind for the next run, which should hugely simplify assembly. Attaching and bonding the underlying structure became quite an ordeal, with a custom cardboard support stackup to hold all of the combs in parallel while the acrylic cement bonded them together.

Then, when I assembled it, the plastic wanted to slide down into the base, so that required some additional support beams below.

I like the poster lights! They’re all on a string and require no soldering. I’ll bet a custom hole shape could be created to accept the lights individually, making it literally plug-and-play!

I was initially thinking about doing some kind of wave pattern, but went with the smooth parabolic curve in the end. Some kind of wave interference pattern would be cool too!

I was pondering the dynamic aspects. That would be crazy-cool, especially on a larger scale. I’m coming up short on how to make both with movement, and relatively inexpensive.

I mean, imagine the classic “bed of nails”, but with the nail points conforming to the shape of whatever’s lying on it. That would be really cool!

, imagine the classic “bed of nails”,

Very cool would be to tie them to solenoids so as you pumped sound through the pieces would go up and down measuring frequency in one direction and loudness in the other and colored lights playing to the music as well. Far beyond my own abilities, but if one had a band that could put something like that across the front of the stage.

The rest is all glowforge imagination!

The challenge is to find a mechanical movement whose price after a 256x multiplier (and control wiring) doesn’t break the bank (and mind!)

Of course, it DOES beg for some kind of dynamic movement. --v2 needs das blinkenlichten.