My limited experience with acrylic is that it does not have burn marks. It tends to melt rather than scorch.

Polycarbonate (Lexan) is pretty similar to acrylic, and it can burn. But it bubbles up a lot around the burn location.

So… possibly there is some setting you could find which burns acrylic, but most likely even if you did find such a setting, it would blister more than discolor.

If you want black in the etching in Acrylic, you can use something like this.
Laserbits Pro color-fill

Thanks! That is very helpful. I will give this a try.

and alternatively, you can engrave into the acrylic and then glue some other thinner acrylic cut pieces inside… I can’t find an example of this on the forums, even though we have a bunch around the office. It makes a cool kinda inset feel - which incidentally would make the pieces easier to pick up, since you’d have a little purchase around the bottom edge

Thank you for the additional info. How durable would you say that the paints are?
I’m encouraged to see them used in a key chain scenario as opposed to plaques that sit on the shelf.
I will pop over to the keychain thread and ask Nick as well.
Thanks!

Nick would know much better than I, I haven’t had a chance to play with that yet.

Hhmmm, you sure? I am almost positive that someone (Dan?) explained the white / red airplane invitations were 2-layer acrylic, and someone posted a link to a place to buy sheets like that…

yes, two-color acrylic. Made and sold by many companies, such as inventables.
The frog is also acrylic.[quote=“Kusmeroglu, post:1, topic:1406”]
the acrylic we used
[/quote]

Yesss, that’s exactly the site they posted, thanks!

check out this thread if you haven’t yet. So much good stuff:

Materials and suppliers Beyond the Manual

I thought I would start a thread specifically on materials and supplies. I (we) have been collecting while waiting for the Glowforge. Some of these are already out there on the form under various topics but it might be nice to have a more consolidated list. I welcome anyone to post in this thread. I was thinking I would post what it is, where it was obtained and how much it cost. I plan to also include a photo or two.

Aaahh, so the ones on that inventables page are not 2 layers of acrylic?

Ok my bad…I watched it again and yes…the material used was colorcast acrylic, however the more common material is a bit thinner and is used for name tags signage and comes in lots of colors…and is not a pricy
http://www.bur-lane.com/rowmark-lasermark

colorcast acrylic but if you are talking shop…most people know it as engravable plastic…like what name badge are made of. As opposed to rotary plastic which is not

More options & less expensive is always good! Thanks for that link

This was what came in my sample kit from Bur-Lane at ISAExpo2015. You can order specific color samples from them as well. 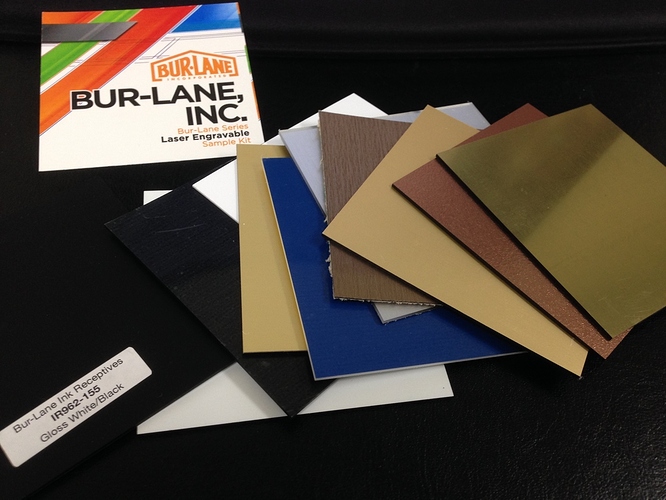 Thats where I get that type of material from…its really nice that I have a store in town!!