I saw an awesome “toy” online that I though about getting, and also thought would be great for our nephews for Christmas. It’s called Kaleidograph ( http://kaleidographtoy.com/ ) which is a modern take on ages old kaleidoscopic art devices. They are multiple sheets of colored or patterned paper with symmetric shapes cut out, allowing you to stack them in a paper holder to create billions of kaleidoscopic designs. I particularly love their OpArt version ( http://kaleidographtoy.com/opart )

Anyway, I showed my wife and she said “Paper? No. You know George and James will destroy those.” She’s absolutely correct, so it looks like I’ll only be buying myself a set

But I said to myself “I bet I could make a version for them out of acrylic, and use all sorts of fancy acrylics at that!” 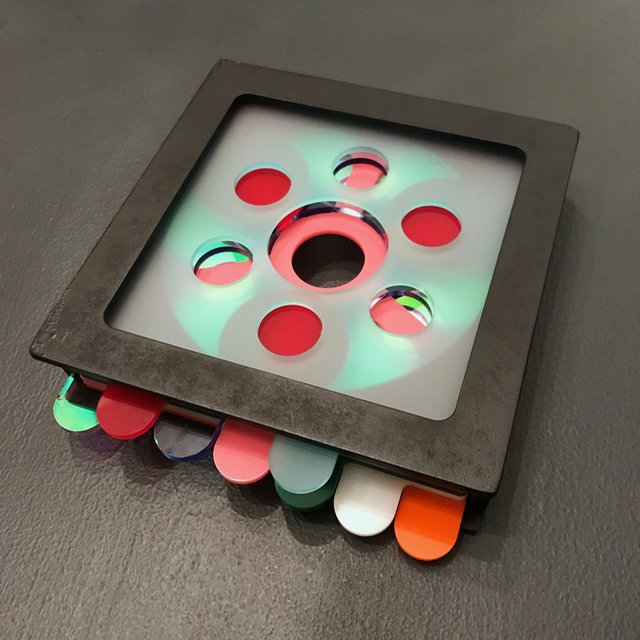 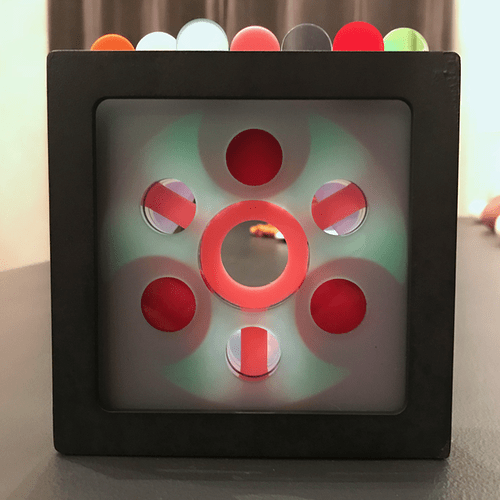 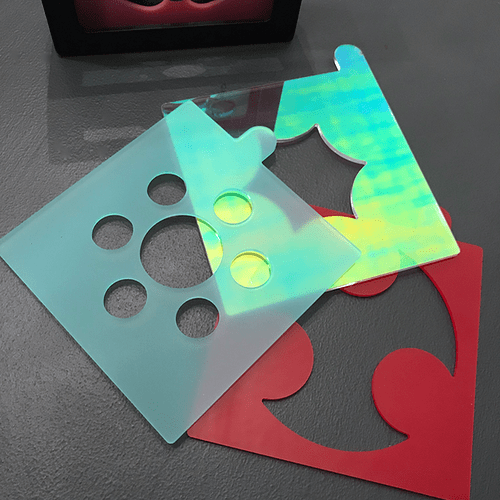 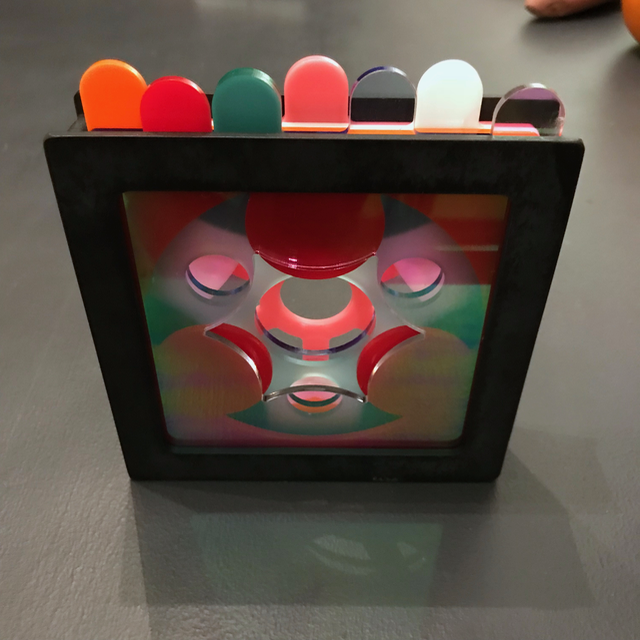 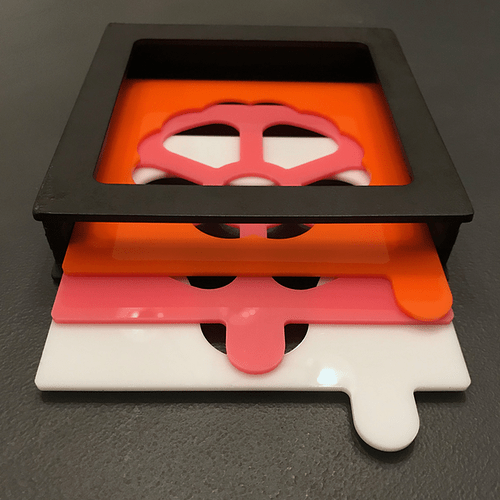 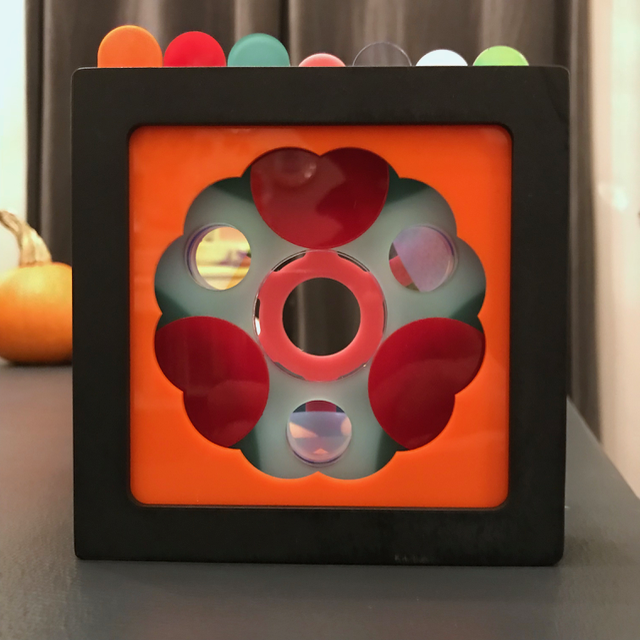 These are way sturdier than paper sheets in the hands of 3-4 year olds, and have the added bonus of being able to use them as tracing toys (thanks to a friend pointing out her son would do that with them).

I designed the holder and the plates in Fusion 360, with the sides of the holder being made up of layers of thin edge slices. The plates are 5 inches across with a 5.5 inch wide holder. I made all corners rounded at least 2mm to have no sharp edges, and hand-sanded the wood edges to be smooth as well. I made the holder out of

draftboard painted black as a test instead of black acrylic; I prefer the mix of textures between the wood and acrylic.

While this one is just a prototype, I’ll be making the final plates (with some different designs) out of a rainbow assortment of frosted, iridescent, and mirror acrylics from Inventables, along with

clear frosted. I’ll probably keep the holder draftboard, but might go with an unfinished hardwood for the front and back layers.

I’m also working on a version with JUST clear acrylic plates, with each one having different engraved or scored patterns, and perhaps LEDs in the holder to edge light them… I’ll keep you posted

What a fantastic idea! Given the complexity that you could achieve with a laser cutter, I could see doing a set of these for big kids too. (Bottom lit, it could be adjusted for your mood and seasonal decor.)

Spectacular project! Really, really cool and yep, you have to make an adult version

I’m also working on a version with JUST clear acrylic plates, with each one having different engraved or scored patterns, and perhaps LEDs in the holder to edge light them… I’ll keep you posted

This is one of my favorite LED acrylic pieces and it came to mind when you mentioned making your edge lit. (It’s not my piece btw, wish it was though

This beautiful creation was made by artist Utkarsh Kumar Gupta. Incredible and inspirational!

Ooooooo - that’s lovely! I hope I can get something that cool working!

I redid most of the plates and decided on a soft rainbow assortment of frosted acrylics from Inventables (e.g.: https://www.inventables.com/technologies/poppy-acrylic-sheet )*

I still have to remake the holders and paint them, but I figured I’d update here with pics in case anyone wondered what the Inventables acrylics looked like in use (they’re awesome!

Reflecting some light on a piece of mirrored acrylic: 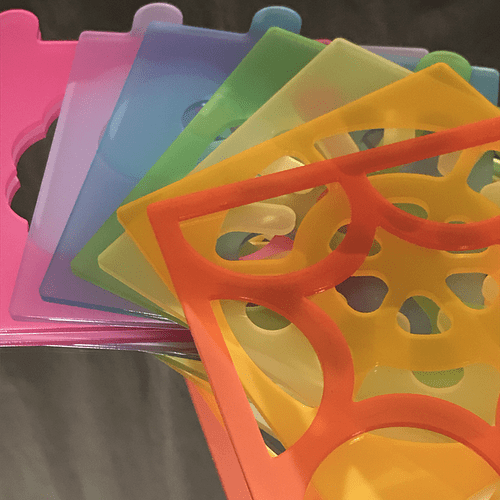 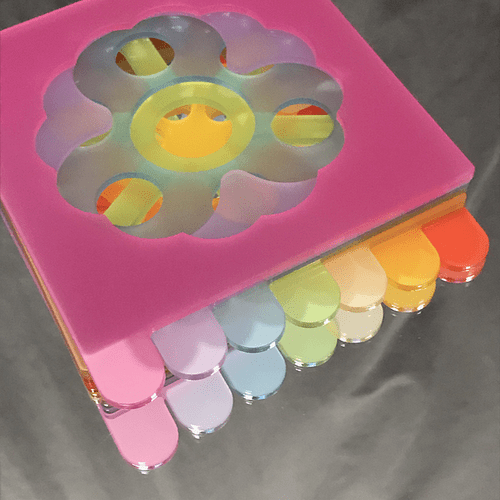 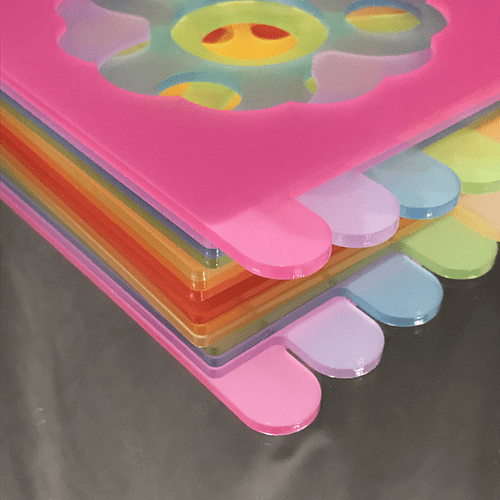 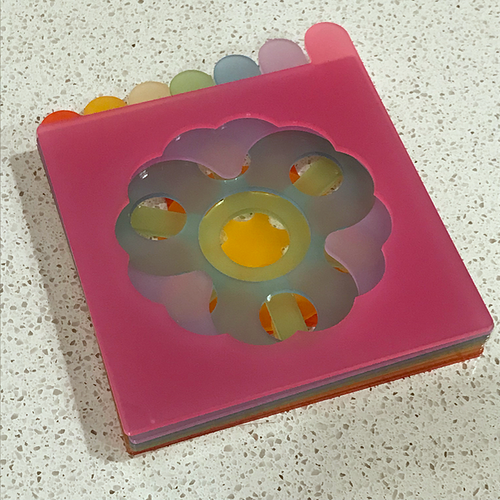 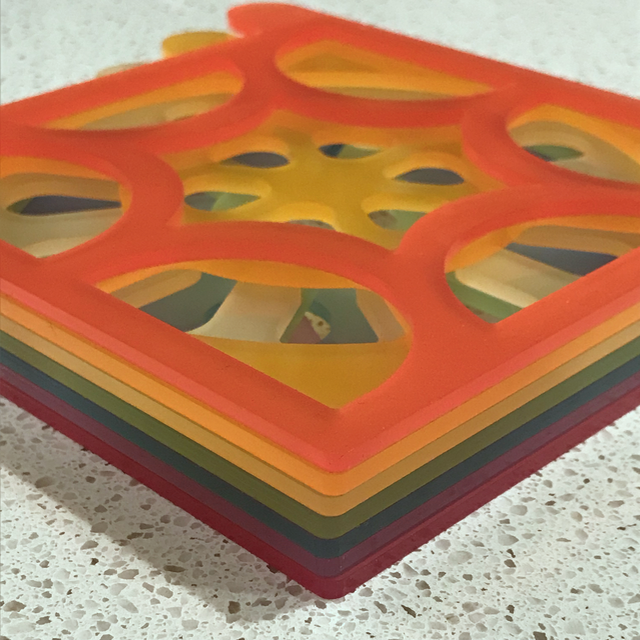 And a couple artsy shots: 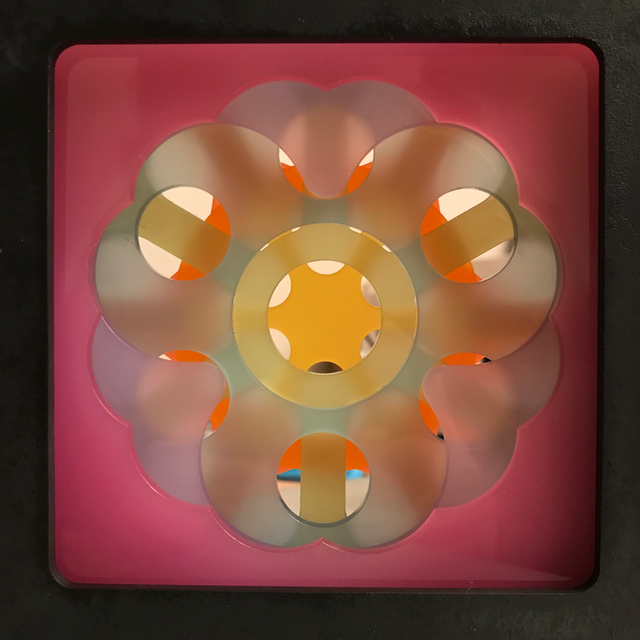 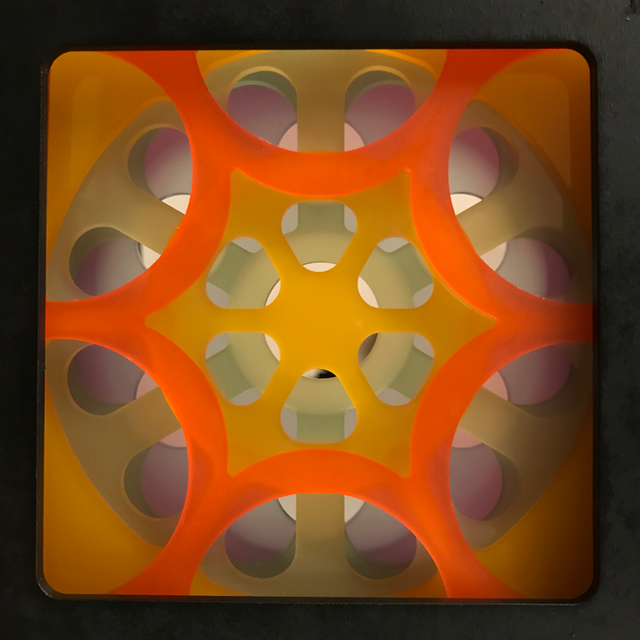 * there is a vendor in Utah who only has a shop on eBay where you can buy large 2’x4’ sheets of the same color frosted acrylics for a lot less, but then you have giant sheets of acrylic that need to be cut down… The same Poppy: https://www.ebay.com/itm/1-8-Frosted-Poppy-Cell-Cast-Acrylic-Sheet-24-x-48/371692559145?hash=item568a9a5b29:g:ftcAAOSwd4tUEONd

Hopefully nobody minds a bit of thread necromancy…

My kids found this when going through the #glowforge-project-examples gallery, and since they’ve been loving their paper Kaleidograph toy to death were excited to try making our own version. (Working on a couple slices of it each day has also been a good way to break up the quarantine boredom.) 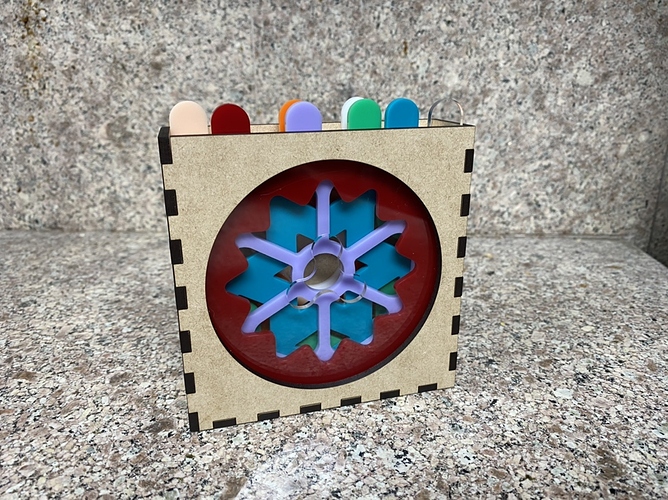 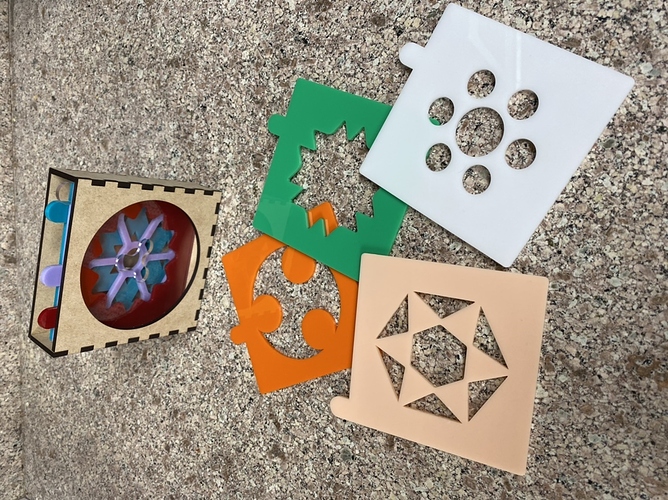 With opaque acrylics it’s a bit less exciting than @gwygonik’s, but scraps from the TAP Plastics dollar bin and a few kinds of Proofgrade were what we had on hand.

Layer designs are a mix of inspirations from this thread and from the paper version we already own, made with a mix of Affinity Designer and Vectornator. (Neither is super great for automating rotational symmetry, but they’re the best I’ve found on iPad, where I prefer to do most of my designing.)

The sleeve/box for arranging them in is a quick/easy

draftboard cut using Box-o-matic. My kids are just fine with it not sanded or painted or anything, but if we make more to gift to little cousins we might try black acrylic for the box.

BTW, my boxes were also draftboard, just painted black. I wanted to be able to sand the edges so they weren’t sharp, like an acrylic box could be.

And this thread made me realize I never posted the files for that project. I’ll have to gather those and put them up.