Is it safe to cut/engrave/forge on though paint that’s vehicular is Acrylic polymer emulsion? With a pigment of Titanium Dioxide (PW6)?

Asking for me? I mean a friend? 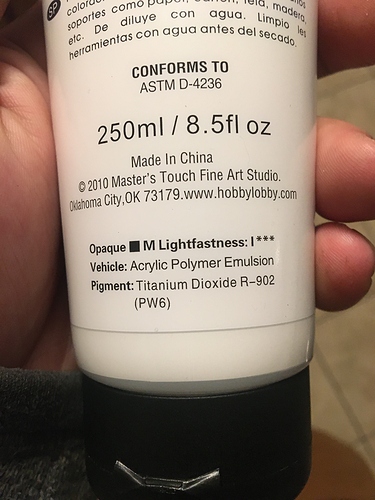 I don’t have the answer, but here are two things to consider:

Not a chemist, so don’t take this as more than a gut feeling.

The pigment is titanium dust. Titanium doesn’t reflect the laser, so I’m going with “safe”.

Disclaimer: If I’m wrong and your GF catches fire, burns down your house, and forces your ex-wife to call you every 10 minutes, don’t blame me.

Titaniuim dioxide is the chemical that makes EVERYTHING white. When I say everything I mean everything. If you have cut white paper, white acrylic or anything else that’s human-made and white then it has TiO2 in it.

I suspect that you would have nearly the success of separating the oxygen from Titanium as from Aluminium. If it was easy folks would have been making Titanium steel swords back when doing so would be more useful than now.

Titaniuim dioxide is the chemical that makes EVERYTHING white.

It’s in almost every paint out there - even ones that aren’t white because it’s used for a consistent base that can be tinted & colored more consistently than attempting to create many of the colors out there.

Look at almost any paint can and you should see it referenced. It’s safe to laser.