Hi all,
In designing an HO Scale version of my house, I decided it was an opportunity to learn Affinity designer. I have used Adobe Illustrator almost daily for years, but as I retire later this year, I figure it was time to switch. So half way through the project, I switched to Affinity. Mostly I am making the switch smoothly, but there are some questions I have that the Affinity tutorials and help forums don’t seem to address. I figure these are simple issues I am having with obvious answers. Maybe someone here has an idea.

Question 1. Is there the equivalent of the AI rotate tool? I have an object with a couple of angles that I want to rotate to align to another object that have odd angles. In Illustrator, I can choose an anchor point to use as my rotate point, but I can’t figure out how to do this in AD. For example… 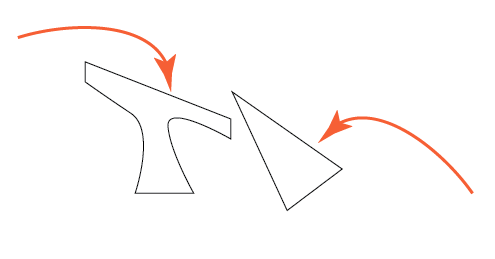 … if I want to align the two faces, in Illustrator, I would use one anchor point to snap to another object’s anchor point, then using the Rotate tool, I would set the point of rotation to the aligned anchor points, and rotate until the two paths snap together. I can’t find the equivalent in Affinity Designer.

I have other questions about using Designer, but these are the two I have found most frustrating so far.

I haven’t fully figured out the snap fumctions, but if you have the little magnet in the top toolbar selected, you can go into node edit mode, select your entire object, and move it over the other one. If you shift-select both objects so you can see all their nodes, but only have the nodes selected on the moving object, you can see when the nodes align, and it will flash yellow to let you know.

There’s a tool in the lower top bar that looks like a crosshair – clicking it lets you see and adjust the centerpoint of your object. You rotate an object like in any other program, by selecting it and then dragging the handle that sticks up from its top. If you hold shift it rotates in specific increments. You can also just enter an angle in the box in the lower right corner of the window where the coordinates and sizes and angle of things are displayed.

I just got AD and, have not used it much at all yet but, in response to your first question: if you select the object, then click the “Enable Transform Origin” button at the top, you will get a crosshair on the object showing the rotational center. You can then click and drag it to move that where you like. 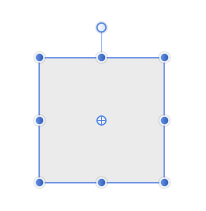 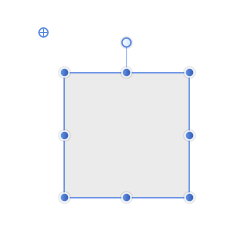 EDIT: Er, I guess @geek2nurse said that. I just didn’t quite process it on first read. Leaving this for the illustrations.

Given shapes in red and blue 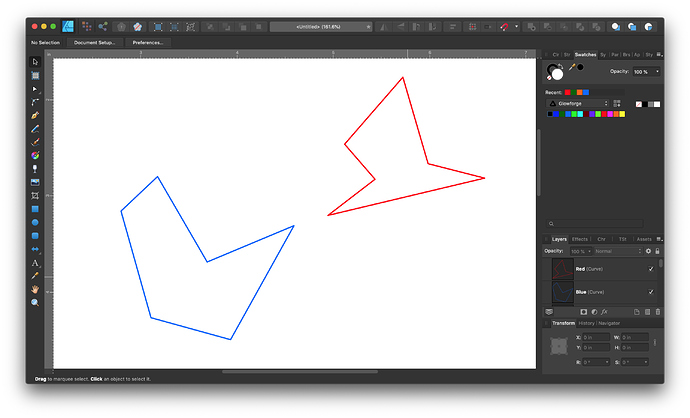 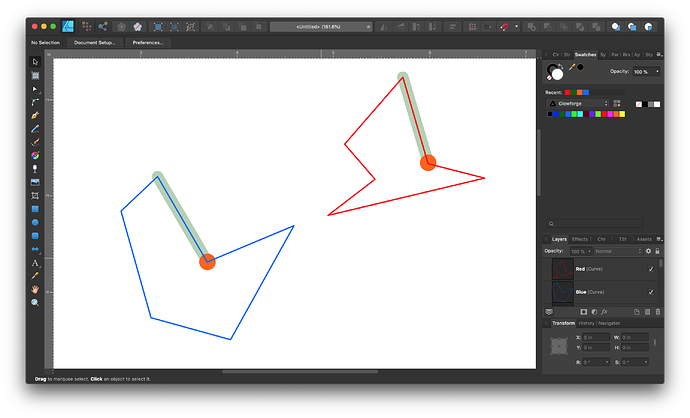 Select the Node Tool [A]. Click the red object. All vertices highlight as white boxes. Activate the Snapping Magnet. 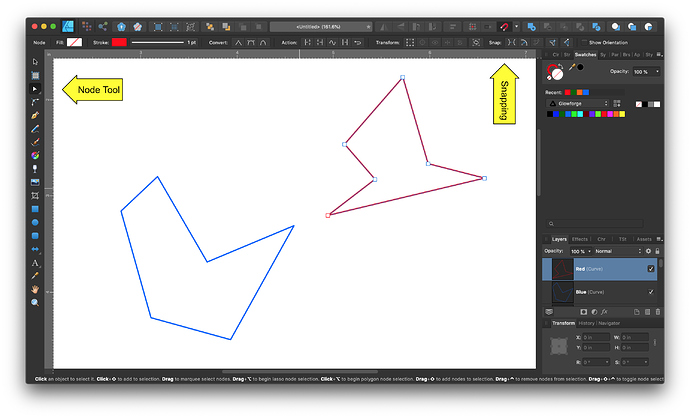 Marquee-select all of the red object to select every vertice. All white highlight boxes should be blue. 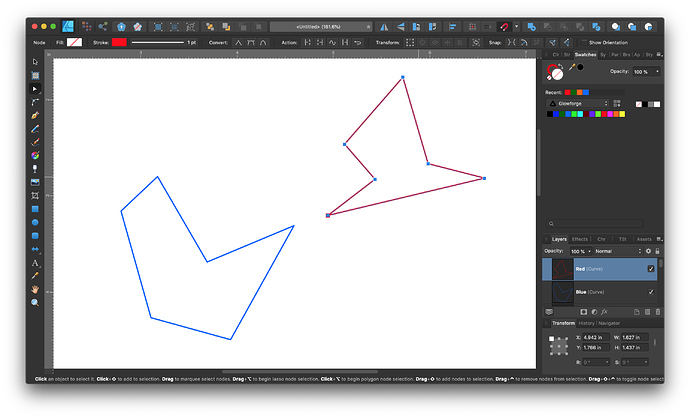 Hover over the specific vertice and drag it to the intended destination. The Snapping Magnet will understand this is the priority vertice to use. Any green bars that appear around the snapping target might suggest you’re snapping to a nearby stroke edge rather than dead-center on an underlying target vertice. Do this under greater canvas magnification to be sure. 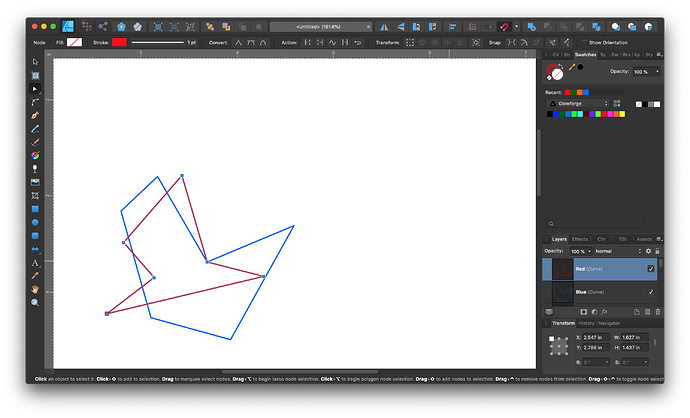 Activate the Move Tool and subsequently the Transform Origin toggle. A draggable crosshair reticle appears OR it might be elsewhere on the canvas wherever the red object was initially laid down. 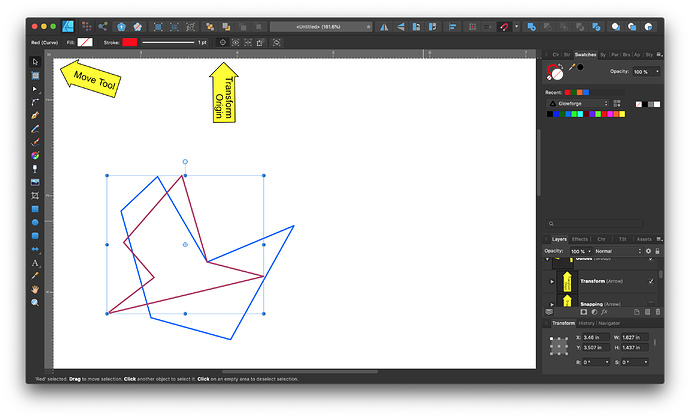 Drag the reticle to where all the action is. This is now the red object’s new pivot point. Thank the Snapping Magnet for making this easier. It’s waiting. 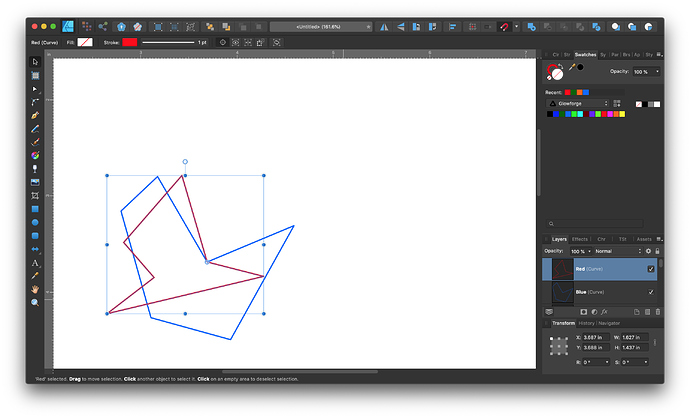 Using the white dot handle, rotate the object so that the intended line segments align. 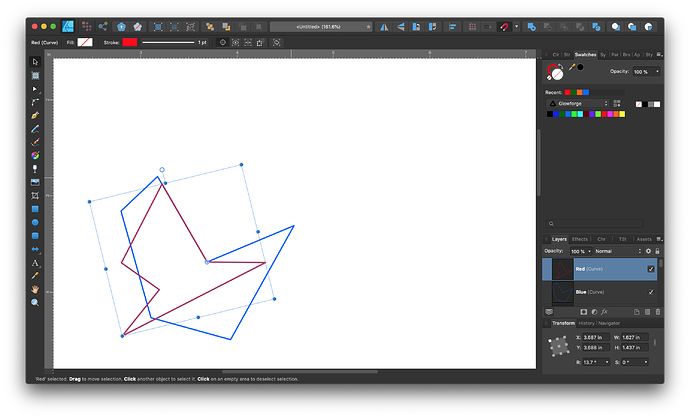 Sweet – Thank you to all of you. That makes it clear. I knew there had to be a way, I just couldn’t find it. Mostly, though, I am finding that the switch from Illustrator to Designer is an easy one.

I noticed in the Microsoft store it says as long as you are logged in with your Microsoft account, you can install Infinity Designer (bought through the Microsoft Store) on up to 10 devices. I can’t find anything in the Serif store. Does anyone know this???

I know that YouTube has a great Illustrator tutorial series (I posted one I found) with a complete gammat of things to learn along with free downloadable worksheets. Has anyone found something similar for Affinity Designer?

I have time right now to really learn this — or learn Illustrator but I need to settle on one. I do NOT like that Adobe went to online monthly/yearly charges but that is where Affinity might replace it. I started a tutorial quite awhile back in Affinity (but it was lacking) and gave up due to not enough time. would really like to make use of this time and increase my skills.

Anyone switch from Illustrator (mine is CS3 and is buggy) to Affinity and wish they hadn’t? Why?

Thanks for any information!

Affinity Designer isn’t a Microsoft product…I’ve had to buy licenses for each device for any of their products. For what it can do, it’s totally worth the price even so.

I didn’t switch from Illustrator, but I love it.

I know for absolute certainty that Affinity allows their direct-purchased products to be installed on a minimum of FOUR machines. It was indicated somewhere on their website and possibly in their forums.

My use of vector illustration stretches back to the days of Macromedia FREEHAND. That led to Adobe Illustrator for a decade getting pillaged every couple years for the Production Suite upgrade. YEARS of bloodletting from Adobe conditioned me to be skeptical of Affinity Designer & Photo’s one-time low price, but within the first few months of using it, I’d GLADLY pay the full $50 retail cost on EACH machine if Affinity wanted to use that pricing scheme, but they don’t.

I’ve paid 3 times for each product… Affinity Designer: 1 Windows, 1 OS X, 1 iOS purchase… most made when they have their frequent sales knocking 30-40% off… in total, ~$85 enables me to pick up ANY device and make SVG stuff for the Glowforge… MacBook Pro, Bootcamp Windows, Surface Pro 4, iPad Pro, and even the host PC that babysits one of my older Resin Printers. The document file gets pushed up to the cloud so that it’s within easy reach regardless of the machine/platform I chose to use. Compared to what I would have been paying Adobe, it’s the steal of the century. I’d like to thank Adobe for pushing me away from their rental model. I can justify a new laptop or iPad Pro every few years from that alone – and STILL have available Affinity license seats to dole out.

Their current 50% off sale is pretty insane. If the Microsoft (App) Store’s offer of 10 licenses is legit, by all means go for it if THAT’s the main compelling feature for you. The 4 from Affinity direct is plenty on this end and as you can tell, I’d gladly pay again for another 4 if the gadget fleet swelled to that requirement. In light of what the Glowforge Pro cost and that Adobe membership fee, Affinity’s current $25 sale is a rounding error by comparison.

Usability. My journey from Freehand to Illustrator to Designer means I have nothing to offer from a square-one user’s perspective. I can only say that Designer gave me 99% of the features and tools I was previously familiar with. The UI remains nice & consistent throughout not only the platforms, but between Designer and Photo. The missing 1%? Automatic tracing. Some get around this by incorporating Inkscape. In that rare blue-moon moment I need it, I used the iOS app IMAEngine to do enough of the work to get me rolling when pushing it downstream to Designer. IOW, it’s a 1% I’m not particularly missing and that’s entirely dependent on each user. If I were starting fresh, I’d probably take a hard look at the $49 workbook Affinity put out each for Designer and Photo. If your user handle denotes experience with CAD or Brushing, I don’t see how Illustrator OR Affinity Designer would be any hurdle to clear within a month of exposure and meaningful use.

Amazing answer! This really helped me in making my decision.

Thus far I haven’t found what appears to be a very comprehensible video tutorial as I did for one that Gareth David Studios has as it has worksheets included so you can work along with him. Hopefully I will be able to follow along with AD, just might have to get used to the interface a bit first. I like how he presents and it looks like it will be a good match if I can follow along with AD. I’m going to look around a bit more and see if I can find a tutorial similar with worksheets … I like it because it is the same graphics he demonstrates in the videos.

The price is amazing… I was just wanting to make sure I could get it on the 3 computers I use (which includes a Surface). If my son wants to learn it…for the price, I don’t mind buying him his own license!

My CS3 photoshop works just fine, (CS3 Illustrator is too buggy) so I will keep using that for digi scrapping when I take that back up … but I think AD will be my choice for the GF. Thank you so much for a great write up! My hubby knows Inkscape so he can probably help on that if I need something from that program (Inkscape was just not a comfortable program for me).

I love this community!

will check it out RIGHT NOW… thanks!

was just looking at using MacOS designer since I purchased it on my iPad pro a while back. I’ve been using Inkscape 1 beta on my iMac and it’s really slow, but fixes the UI issues (and adds a couple bugs). Anyway, check out their site, they are running a 50% off desktop versions sale!