I like how this came out. I’ll be doing more with my stack of old fence boards! 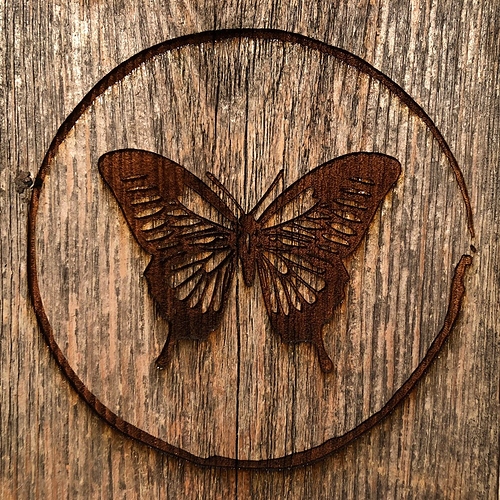 I’m particularly caught by the freehand effect of the circle you’ve drawn around the butterfly.

I’ve recently thought of trying to create an image on a fan leaf that might be the last frame of a short video. The butterfly alights on a branch, becomes still, and the image dissolves to become the leaf of the fan.

Perhaps just putting it into words is creativity enough !

How about a fan that’s a sort flip book. I know the fans are kind of rigid, but maybe the ends when closed show your idea of the butterfly in flight and the open fan has butterflies as a theme.

Perhaps that needs updating - pews to the laser ?

Nice! I bet it also smelled good during the engrave…

The butterfly alights on a branch

Your words paint a beautiful picture.

The image is the logo of the mental health practice where I work. It’s all decorated in “shabby chic,” which creates kind of an inviting, homey atmosphere our clients really like. Old cedar planking fits in really well!

The circle, in the original, looks like a paint stroke, starting out wide and a little wobbly, and getting thinner as it goes. I just did a quick “trace” of the bitmap in Inkscape and haven’t gone back and fiddled with it yet, but I plan to, because I really like the effect. I also want to play with the print settings a little; this was my first go.

(I’d post what the settings were, but the sticky note they’re written on is at the other end of the house and down a flight of stairs, and I haven’t had my coffee yet!)

I love that…the burn looks like a rust stain.

Ooh, now that you say it, it DOES! Maybe I don’t need to fiddle with it.

Please leave it - it can’t be improved.
John

Yurp! I’m about to head outside and start tearing down the fence.

“Reports are coming in of a nationwide spate of weird thefts, with fence planks random locations, suddenly disappearing .” …Police baffled…

Right? Every time I see a pile of junk wood somewhere I’m tempted to pull over and go rooting around in it.

What a cool combination of old and new! I love the texture of that board.